City Year is known for our service in schools, where thousands of student success coaches provide students across 29 U.S. cities with holistic support in social, emotional and academic development. However, as an organization dedicated to supporting students, teachers and schools, we recognize the need to go beyond the classroom walls and to contribute to communities in diverse ways.

City Year AmeriCorps members who are interested in serving another year have the opportunity to apply for a second year of service in schools OR they can apply to a civic engagement team. Civic engagement opportunities are available in eight locations, including: Boston, Chicago, Los Angeles, Milwaukee, New York, Philadelphia, Seattle and Washington D.C. 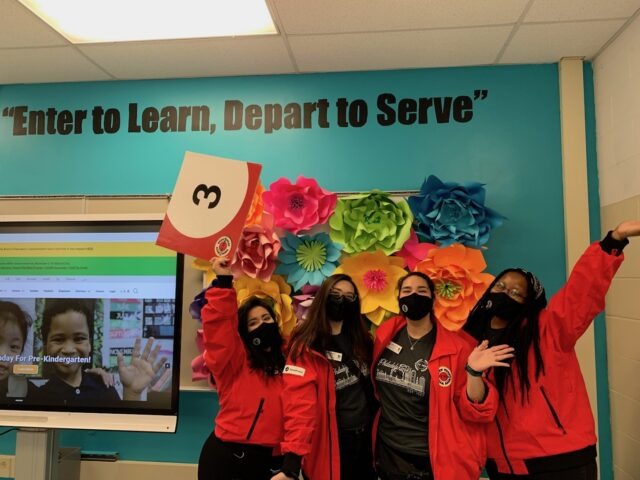 What is the City Year civic engagement team?

All City Year AmeriCorps members serve as student success coaches during their first year of service. Corps members attend learning and development days throughout the service year, which emphasize tutoring and mentoring skills.

Returning corps members can also join civic engagement teams connect with schools, local nonprofits and businesses as well as community members with physical service projects. These projects can include, but are not limited to, painting murals in schools, school supply drives, park cleanups and writing thoughtful letters to students—the same sort of public service projects City Year corps members focused on during the earliest days of City Year in the late 1980s and 1990s.

City Year alum Andrea “AB” Barajas joined City Year Philadelphia at the beginning of the 2020-2021 school year. Although her year of service was virtual due to the pandemic, she built meaningful connections with her team, students and partner teacher at John Welsh Elementary School.

During the 2021 MLK Day of Service keynote speech, Center for Black Educator Development CEO Sharif El-Mekki challenged the audience to reflect on what a beloved community is and how everyone can be a part of one—and AB still remembers what he shared.

“The emphasis on what a beloved community is really hit the nail on the head for me. I related to it so much because I built such great connections during my first year of service, so I knew I wanted to stay with City Year,” AB said.

AB cited her curious personality and love for art as a big reason why she decided to apply to the civic engagement team in Philly for the 2021-2022 service year. “I loved the idea of CE being able to have a mission to support the design of our school partners. And it’s also an opportunity to build connections outside of the schoolhouse,” she said.

Service events, such as MLK Day of Service, attract thousands of volunteers from City Year staff and corps members, City Year alums, volunteers from corporate partnerships and community members. When you’re on a civic engagement team you have more community-based opportunities and can build a local network.

Civic engagement teams are typically housed within a site’s development (fundraising) department. Corporate partnerships can vary by site as many relationships are built locally, but some networking opportunities can include working service events at a foodbank, being paired with a mentor, as well as resume and LinkedIn reviews.

If you are currently a first-year corps member, we suggest you apply to service reserves to gain insight on what a day is like on the civic engagement team. Service reserves is an extracurricular activity where first-year corps members work with their civic engagement team on smaller projects, such as prepping a service event by outlining murals in pencil or laying out painter’s tape, organizing paint colors and setting up volunteer stations.

Civic engagement has a lasting impact

Murals not only brighten up the schoolhouse, but spark inspiration within the school community. Many schools are decorated with murals of icons like tennis star Serena Williams, Marvel superhero Black Panther and President Barack Obama.

“When students walk by these murals of people who look like them, they can say ‘I can relate and see myself in this person.’ So, there’s a lot more meaning than just painting a wall,” AB explains. “There’s a lot of significance for the students, teachers and for the corps members who are serving at that school.”

“If I saw Selena Quintanilla on my school wall I would be so excited, you know, that’s my Latina queen,” joked AB

Are you interested in serving another year with City Year? Consider applying to the civic engagement team.