Shaneequa Shyrier, who goes by Shan, served two years as an AmeriCorps member, first with City Year Los Angeles (2013-2014) and then as a team leader at City Year San Antonio (2014-2015). She then joined City Year’s staff in an entry-level job where she worked her way up to HQ digital marketing manager before being recruited to work at Meta, the parent company of Facebook, one of the world’s largest and most valuable information technology companies in the world.*

Shan shares her professional journey and reflects on what she learned at City Year and how it has helped her to grow in her career. She spoke with another City Year alum, Brittany White, City Year Philadelphia ‘14, ‘15, who now works as City Year’s National Communications Manager focused on storytelling for young adult audiences.

Shan Shyrier (SS): After I graduated from UNC Chapel Hill with a degree in psychology, I joined City Year Los Angeles, serving at a school called Santee Education Complex in South LA. We were the first team to serve in that school, and I worked with high school students in English and geometry.

I was always interested in the education sector. But I wasn’t sure if I wanted to be a teacher or not. My service year allowed me better to understand the education landscape and the systemic challenges students and teachers face. I loved it, and I always tell people that it was one of the most pivotal years of my career!

Following my first corps year, I served as a team leader with City Year San Antonio during the 2014-2015 school year at Martin Luther King Jr. Academy, where I led a group of eight corps members. This was also another foundational year in my career because I had an opportunity to work closely with school administration and support students and educators in a whole-school capacity. I was also able to have a more hands-on role in setting goals for our team and tracking student and corps member progress.

People don’t realize that what City Year can offer you as Team Leader is pretty unique. At that age, there aren’t many jobs where you can gain experience in a leadership role, helping to manage relationships and thinking big picture for your team.

From service to a career at City Year

BW: After finishing your year as a Team Leader, you applied for a City Year staff member position in San Antonio. What was your experience working at the site level and later at City Year HQ in Boston?

SS: I wanted to stay with City Year because I was so passionate about the mission and felt confident that I no longer wanted to be a teacher. I was interested in the nonprofit management aspect of City Year and felt like my skills and talents were better suited for this work.

My first role was in operations and finance at City Year San Antonio, handling everything from buying office supplies to helping manage our budget. I would work with our chief of staff to help write press releases and fulfill other communications tasks. I did everything—I was pretty much like a utility knife!

At a certain point, I started to dabble in marketing. The site needed someone to run its social media channels, and I wanted to gain some experience in that area. So, I began to craft content for the site’s Twitter and Instagram accounts. After a year or so of working with City Year San Antonio, I applied for a role on the marketing team at HQ and got the job.

During my time at HQ in Boston, I started as a Special Projects Manager and gradually worked my way up to be a Digital Marketing Manager.

I was essentially an administrative assistant to the head of marketing in my first HQ role. Still, I took that as an opportunity to learn more about the industry. I was very open with my boss about my interest in growing at City Year. So, she made sure I was involved in small marketing projects.

After two years, I was promoted to Digital Marketing Manager, a role that was more focused and specialized.

In that position, I worked alongside our team members to manage our email marketing campaigns across our sites and at HQ. I also managed our paid advertising.

I had the opportunity to work on City Year’s rebrand campaign, helping to update the website, which was a massive project for our team. It’s also an experience that has influenced some of the work I’ve been doing with Meta, as Meta—formerly Facebook—has gone through its own rebrand. And our team is also working on rebranding our programs to align with Meta’s new direction and vision.

So, it’s fantastic to apply some of the experience that I got from the City Year rebrand into what work I’m doing now. 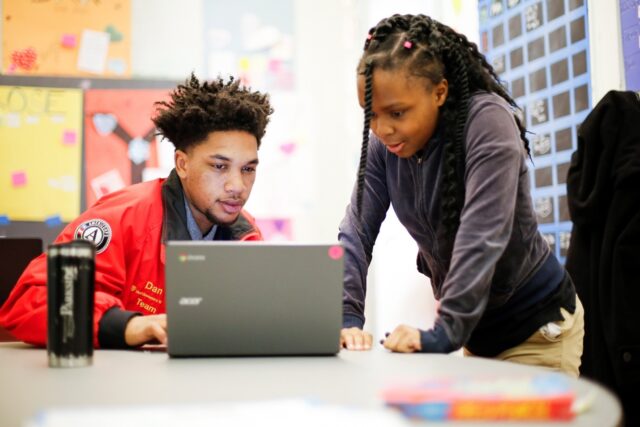 From City Year to a career in tech

BW: How did you make the transition from City Year to Meta?

SS: I had been with City Year since I graduated from college. So, I always knew one day I would want to look for things outside of City Year to broaden my portfolio of work. At the time, I was not looking for another job. But a Meta recruiter contacted me on LinkedIn to interview for a position on the Education Modernization Team, which focuses on working with underrepresented communities and increasing access to STEM programming.

After interviewing and speaking with the team, it seemed to align well with the work that we were doing at City Year. Even though the team is housed in a for-profit corporate company, the work seemed very much like nonprofit work. The goal is simply to increase access to computer science programming for systemically underrepresented students and communities. And I thought that was just so amazing!

So, after getting hired, I relocated from Boston to California. By taking on the new position at Meta, I was able to double my salary.

Learn how you can make your service stand out on your resume.

BW: Tell us more about your role at Meta. What are some of the programs and initiatives you work on?

SS: I work as the Digital Marketing Manager. In my first year in the role, we had to build our marketing team and strategy from the ground up. I created Instagram and Facebook accounts for all our programs. I crafted messaging guides. I helped our team define our mission, vision and core values. And finally, I led the content overhaul for one of our program websites. It was a lot of work, but it was fun—and obviously, I could draw on my experiences at City Year with that project directly.

Getting our marketing team off the ground took about six months. These days, I focus less on creating content for our program web pages and social media and more on vision and strategy. I lead our effort to build brand awareness and credibility for our programs.

One of our main programs is called Engineer for the Week, which aims to introduce K-12 students to engineering. This program engages students by allowing them to create their own online game or chatbot. For example, we’ve had students create a Facebook chatbot that helps provide resources for people searching for mental health resources. We just launched that program in Spanish, too. And that has been really cool because we’re able to address some of the systemic language barriers with our programming.

City Year is helping students learn the fun in engineering through after school programs.

Our newest pilot program is called Nourished Teachers, and it’s focused on educators and providing support and resources to teachers. Essentially, we’re just letting them know, “Hey, you appreciate what you do,” because teachers are tasked with a lot. Our students do their best when their educators do their best and we shouldn’t lose sight of that. And often, the students are the sole focus when we should also be supporting our educators. For Nourished Teachers, we’re currently planning teacher appreciation events in different communities across the United States.

BW: What advice would you give prospective and current AmeriCorps members who are thinking about pursuing a career in tech?

SS: When I was interviewing for Meta, the recruiter told me that my LinkedIn profile stood out because of my City Year experience . They had been searching for someone who had both marketing and education experience—particularly in systemically underserved communities. They appreciated my commitment and dedication to supporting students of color and being able to bridge the gap in access to fundamental learning resources and opportunities. That’s the kind of candidate they wanted. That’s what drew them to me.

So, do not undersell or underestimate your City Year experience!

I always say City Year is what you make it. There are so many skills you can pick up and develop through service—for example, event and project management. As a corps member, you organize and manage afterschool programs and various whole school initiatives throughout the year. And these skills are so valuable in the tech world. There are tons of event planning and project management roles at companies like Meta, Twitter and Google.

For corps members interested in sticking education or social impact, most tech corporations have a philanthropy arm or social responsibility team dedicated to making a difference in their respective communities.

You don’t have to be a “techie” to get a job in tech! You can be a nonprofit professional, a writer, an accountant, a youth development specialist, an administrative assistant—and I guarantee you, there’s a job opportunity for you at a tech company!

Your City Year experience can get you to whatever career path it is for you. It’s a unique experience, and many companies—including tech giants—will see that and value it. Keep that in mind, and don’t count yourself out.

Looking for an experience that could jumpstart your career in tech? Connect with us or apply now!

*This blog reflects personal views of Shaneequa Shyrier and not those held by Meta.