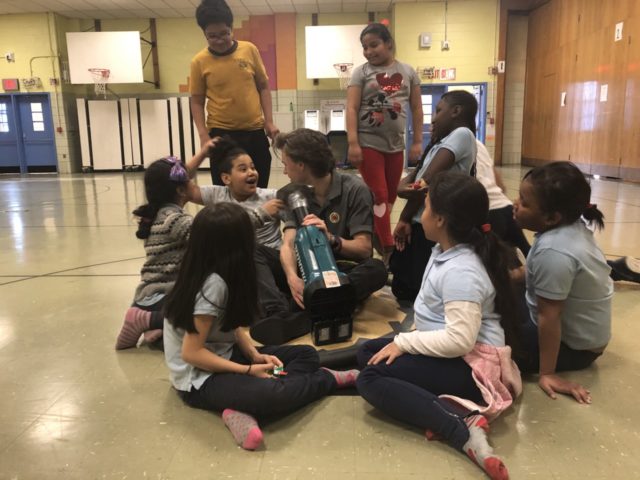 A gap year with City Year

While the majority of City Year AmeriCorps members are college graduates, a smaller number of young adults who want to take a gap year between high school and college are also accepted each year. Here is Ben’s story.

When Ben Evanson (New York ’19) start his school year, he had just graduated from high school and was eager to get the most out of a gap year experience before he started college at the University of Texas at Austin.

“My mother once heard about City Year through one of their ads on public radio and she thought, ‘Wow, that sounds really cool.’ So, when I decided to take a gap year, my mom naturally brought up it up,” Ben says. “I still wanted to go the non-traditional route and do something I felt was important before going to college—this was the perfect opportunity.”

Learn more about the benefits of a gap year with City Year.

Growing up, Ben had always been interested in engineering. Watching science experiment shows like Myth Busters, he learned to tinker with things, spending hours in the backyard playing and building. It was only natural that when Ben started his service at an elementary school in East Harlem, he found a way to weave his in his interests with his service. One of the first things he did was start a STEM-related afterschool program.

“Engineering is something I’m very passionate about and I wanted to share with my students so I started the Engineer’s Club,” says Ben. “There was a lot of excitement about it and we had a group of around 30 kids participate.”

High quality after school programs in systemically under-resourced schools can help to advance educational equity as middle class students often have access to these resources, while students growing up in neighborhoods of concentrated poverty do not.

Each week, Ben would meticulously put together a lesson plan, drawing a lot of his inspiration for when he was in elementary school and tinkering in his backyard. He really wanted his students to come away with a better understanding of math and science, so his goal was to keep the material fun and engaging. They did everything from the classic hydrogen peroxide volcano to building a mini hover craft.

“The hover buster we built with plywood and a leaf blower donated from Home Depot was their favorite and really captivated their attention,” Ben says. “I always made sure there was something that was big, exciting or something that would keep them interested—or at least something that got my attention as a kid.”

While it may seem like Ben was simply sharing his passion and enjoying time with his students, it’s important to note that the kind of support he provided can help keep students engaged in math and science. Research shows that 80 percent of American students are either uninterested or not proficient in science, technology, engineering and math (STEM) and that nearly half of all elementary school students, like the ones Ben served, have anxiety related to STEM subjects.

The National Afterschool Association finds that afterschool programs can play an integral role helping students overcome this challenge through role-modeling excitement, making real-world connections and ensuring that the students participate in hands-on activities. Across the country, City Year AmeriCorps members like Ben help ease STEM anxieties by building relationships with their students and by finding fun, practical ways to engage them.

“From my experience, it seems that science is taught mostly theoretically—there’s not much hands-on learning,” Ben says. “I love science and I did my best to provide a space to make it fun, cool and relevant to my students’ everyday lives.”

Now in his freshman year at UT Austin, Ben continues to share his passion through a program that brings UT Austin Engineering students together with local middle school students for tutoring. When reflecting on his year of service, his wish is that his former students will continue to find the joy in learning.
“My hope for them is that they find something they’re passionate about. I want them to really grow to enjoy learning and make themselves better, more fulfilled people in the process.”