Our executive director and local leadership are committed to building a stronger Tulsa by supporting and developing our AmeriCorps members as leaders in their schools and community. 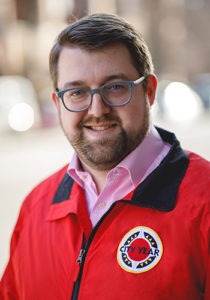 Paul Davis is a seasoned executive with extensive experience in fundraising, board and people development, and operations. He was attracted to City Year due to its local and national scale, well-researched model, and ability to drive impact in education in the Tulsa community.

In his role at City Year, Paul sees the impact that decisions made at the policy and school leadership levels have on students in the schools on a day-to-day basis. He works closely with leadership in the public school system to better understand their vision and collaborate on how decisions impact students at the school level. Because of his work, Paul has key areas of expertise in systems change and public policy as they impact complex engrained systems and the people they serve, such as building coalitions of support for school reform.

Prior to joining City Year Tulsa in 2017, Paul spent nine years in progressively senior roles with the Mental Health Association of Oklahoma (MHAOK), a $30M organization with over 190 employees. As chief administrative officer at MHAOK, he oversaw fundraising, finance and operations, human resources, and marketing. He also has overseen large-scale change management and created MHAOK’s marketing and communications department. Paul got his start at as a lobbyist at MHAOK after spending time in Jordan pursuing his interests in political and public affairs.

Paul is highly respected in the Tulsa community and is passionate about shaping Tulsa to be a community his daughters will be proud to call home. He graduated from Drury University, with a Bachelor of Arts in international political studies, design arts, Middle Eastern studies, and architecture. Paul grew up in California and North Carolina. In his spare time, Paul enjoys watching hockey and spending time with his daughters Mia and Olivia and wife Julie.

Their generosity helps us support our city's students. Together, we’re contributing to a clearer and bolder vision of what public...

Together we can make a difference for Tulsa’s students across our growing city, where a commitment to community, philanthropy, innovation,...