From The Mile-High City to The City of Brotherly Love: A Conversation with City Year AmeriCorps Member Nellie Vinograd 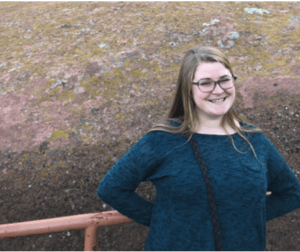 Could you tell us a little bit about yourself?

My name is Nellie Vinograd. My hometown is Bethesda, Maryland. I grew up there and then went to college in North Carolina at Guilford College where I received my bachelor’s degree in English and Sociology. I graduated in 2017 and moved back to Maryland and worked as a barista and then later as a docent at an art museum for a couple years.

What brought you to City Year?

My plan was to attend a graduate school for poetry, but they are notoriously difficult to get into. As I was looking into other options, other opportunities, and things directly connected to education, I heard about City Year through a couple friends who 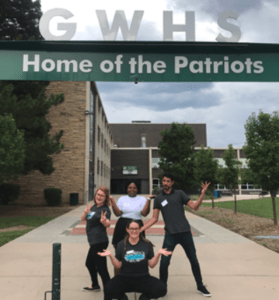 had posted a lot about it on their Facebook pages and on Instagram. Last year I joined City Year Denver as a member of the 2019-2020 class. I joined late, relatively speaking, since a lot of people come right out of high school or college graduation. I wanted to see if teaching was something that I was interested in. Also, being able to work in a place with a very clear equity lens was a big draw for me as well.

What was your favorite part of your service year?

I got a lot out of what my team was able to build amongst each other. With just three AmeriCorps members and one Team Leader, we had a very small team by City Year standards. Seeing what everyone brought to the table and what we were able to build really expanded my understanding of asset-based thinking. Because there were so few people, it was very clear what role everyone played.  It was one of the best work environments I’ve been in.

What interested you in City Year’s Civic Engagement Program?

I originally came to City Year because I wanted to see if I wanted to become a teacher. My time in the classroom showed me I wasn’t quite ready to commit to that although I think it’s still in the back of my mind as a possibility. But I also felt like I wasn’t done yet. I wanted to keep exploring and see what other areas I could use my skillset in.

Last year, my Impact Manager at City Year Denver and I were having a progress meeting and I shared this with him. “Well, you know you don’t have to be a Team Leader to stay with City Year for a second year. There are these other programs,” he said, referencing the Civic Engagement Team. And since Denver didn’t have one, I said, “What’s that? I’ve never heard of it. That sounds cool!” Immediately, it sounded really appealing, and was a new and dynamic type of work I had never done before.

What brought you to Philadelphia to serve?

I had friends and a couple connections in Philadelphia already. I had been considering it as a cool city that I might be considering moving to eventually. Also, being from Maryland, I sort of have a bias for the East Coast. It was good for me to come back to my roots and be closer to my family.

I also really admired Philly and found it to be an interesting, dynamic place. I love its history, the culture of activism, political engagement, and civic engagement that’s here. There’s so much going on and just in the months that I’ve been living here I’ve already been learning so much about what’s happening with the unhoused community and Black Lives Matter. Also, the history of unions and labor organizing that’s here is super interesting. There is so much here. Not just the textbook American history, but everything else going on.

Have you noticed any differences between City Year Denver and City Year Philadelphia?

The first thing that I didn’t really think about until I was in my first Returning AmeriCorps Member meeting was just the size. It sounds obvious, but you don’t really recognize it until you’re in it. At City Year Denver, I think we had seven total Returning AmeriCorps Members, compared to about thirty Team Leaders and thirty or forty second–years at City Year Philadelphia. Another difference is the size and distinction of the staff. We had about three Development staff at City Year Denver compared to an entire department here at CYP. That is not a failure of City Year Denver or anything like that, it’s just the case that it’s a smaller site which made coming to City Year Philly a huge adjustment for me.

What challenges have you faced with everything becoming virtual?

It’s been an adjustment to leave behind my expectations of what CYP and what CE would be. Because we know we can’t do large-scale mural paintings and service events until the city re-opens for large public gatherings, I think CE is just faced with this question of “What are we now?” It’s also good in many ways. Our team is having a lot of conversations about what Civic Engagement actually means, other ways that we can serve students or do physical service that are COVID-friendly, and what are the highest needs that the city really has. 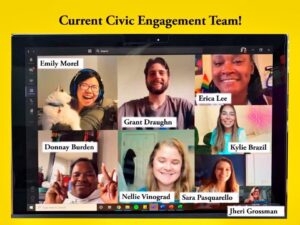 It will ultimately be a good thing that we’re kind of forced to be dynamic and flexible. Maybe in the future CE will do a combination of murals and other projects. It’s really cool to be part of the evolution, as challenging as it is right now.

Despite being virtual, what are you most looking forward to this year?

It would be great to start hosting events and start engaging volunteers. We haven’t rolled out anything yet, but it will be really nice to know that even in a virtual space we’re able to bring people together and get people involved in civic engagement.

Since moving to Philadelphia, what’s your favorite thing about the city so far?

I love my neighborhood. I’m in South Philly, so it’s been amazing to walk around. I’m right by the Italian Market, so that’s probably my favorite location. It’s nice to go somewhere and forget that COVID is a thing because, other than people wearing masks, not much has to change about an open–air market.

So many things that I probably can’t or shouldn’t do at the moment. I’ve always wanted to go to the Philadelphia Art Museum. I really want to go to Fairmount Park and then the Philly Magic Gardens on South Street.

What are your plans for after City Year?

Right now, I would love to stay in Philly and I’m sad by the idea that I could leave. So far, I’ve felt very welcomed. I am thinking about applying for MFA programs again to see what my options are with that. No matter what, I am definitely going to continue with my writing practice, keep working to publish and get my words out there. Beyond that, I’m just trying to live the most ethical life I can. I want to continue to feel this deep engagement and solidarity with my community, that is very structured within City Year, but I really want to find a way to sustain that commitment, whether it’s through another job at a community center organization or at City Year.