It’s no secret that the key to the City Year experience, from its founding in 1988 to today, is relationships. Whether you served as a student success coach building positive relationships with students or focused on civic-related service projects across the city where you served, City Year AmeriCorps members have always made a positive impact through the power of relationships and teamwork.

But that’s not all—some of our 37,000 alums found or grew deeper in love during their City Year experience. We’re excited to highlight a few City Year love stories and hope they bring you joy! 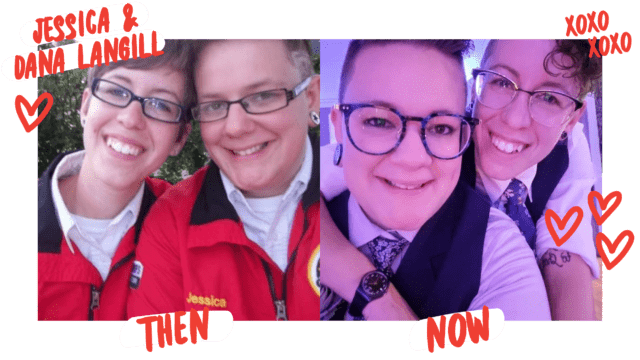 “Our love journey begins right before we both decided to serve with City Year Milwaukee as AmeriCorps members. Dana and I met through mutual friends at Milwaukee Pridefest. About halfway through our service year, we moved into a tiny one room apartment with just one community bathroom we shared with the entire floor of people. If we could survive living in one room together with our two cats and still find each other attractive in those horribly unflattering uniforms, we knew could survive anything. We knew we were meant to be!

“In May 2015 we got married and had a perfect literature-themed wedding. Many City Year friends were in attendance, Dana’s Team Leader, Lauren Feaster (Milwaukee ’11), was even our DJ! We both continue to use the skills we developed during City Year in our careers; myself as the Equity, Diversity, & Inclusion Coordinator at Rogers Behavioral Health, and Dana as second grade teacher at Milwaukee College Prep. Soon, we’ll soon be applying those very same City Year skills of spirit, discipline, purpose and pride to being foster parents!” 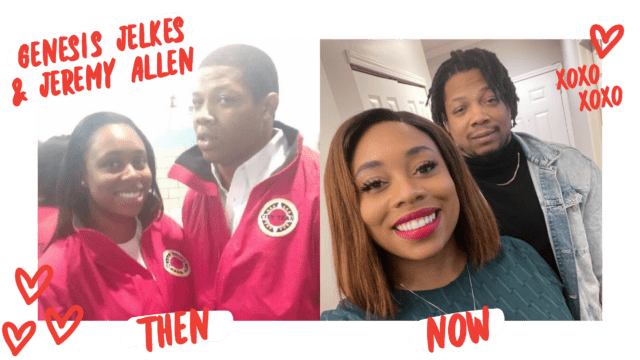 “Although Jeremy and I knew each other prior to City Year, our service year drastically changed the trajectory of our lives and deepened our connection. We met in college, had been dating for a year, and we entered City Year thinking we knew exactly what we wanted to do– I was going into a career of urban planning while Jeremy, with a degree in psychology, wanted to become a school psychologist. Spending our year of service together in the city we both grew up in really opened our eyes to the severity of the issues Chicago faces and rooted us in the common values of living a life of gratitude and service to others.

“During undergrad we spent so much time together doing community service, so transitioning to doing the same during our time in City Year Chicago was amazing. Unity rallies downtown made the two of us feel like we were a part of something BIG, especially knowing that cities all over the country were doing the same thing.

“During our City Year, we each felt very proud to be able to be a model example for our students that getting a college degree, traveling the world, and living a life of purpose were attainable. Since City Year, we have both stayed connected to education in systemically under-resourced communities including mentoring youth, fundraising for schools, and coaching sports.

“I am currently in my 9th year with Noble Schools and Jeremy has transitioned to corporate fundraising. Thinking back to our early City Year days always makes me laugh. Jeremy and I used to always show up to Basic Training Academy together and the whole corps thought we were brother and sister! Imagine their surprise when we danced the night away, romantically, at the annual camp retreat!” 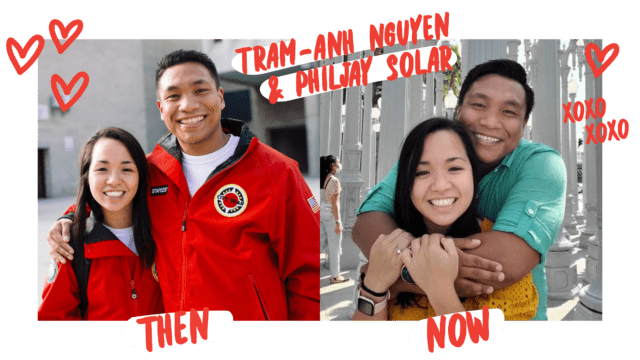 “On one of our last days of City Year Boston Basic Training Academy, each AmeriCorps member was asked to pair up with someone we didn’t know. That person became our “Ubuntu buddy” for the year.

“Philjay and I found each other, wrote our names down on a sticker and stuck it to the back of our nametags. The idea behind this was when times became tough during the service year, we could look at our name tags, see our Ubuntu buddy’s name, and remember that we weren’t alone—there was always someone who was there for you.

“In that first exchange, my random stranger and I quickly learned that we graduated from college the same year, both were criminal justice majors, and that our parents both wanted us to attend law school (Philjay ended up going after City Year– I just lived vicariously through him). We exchanged phone numbers, because we were told to, and kept in touch throughout the year.

“We didn’t end up dating until months later at the end of the service year but having his name on the back of my name tag all year long reminded me that we were together in service all along. We went on to serve another amazing year as team leaders together, and now—eight years later after finding each other as Ubuntu buddies– we are getting married in October 2022!” 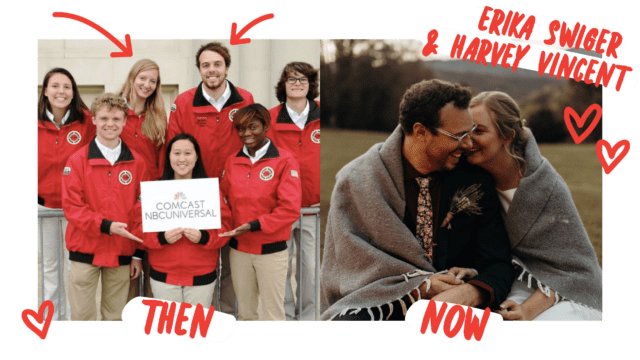 “It all started with a bowl of soup. Harvey and I met during our lunch break on one of my first days at City Year New Hampshire. Our very first interaction was me eagerly exclaiming how delicious my soup was. Although it was a pretty bland, canned soup, Harvey humored me in person by carrying on the conversation while secretly nicknaming me Soup Girl.

“As our service year went on, he learned much more about me than my soup preferences. We discovered our shared passions, values and hopes for the future. Harvey’s humor, leadership and kindness kept me going through a tough year of service with those long 10-hour days.

“After graduation, a year of long distance, several big moves, a slew of even more cringe nicknames than Soup Girl, and two master’s degrees, we tied the knot in 2019 and recently moved to Asheville, NC.” 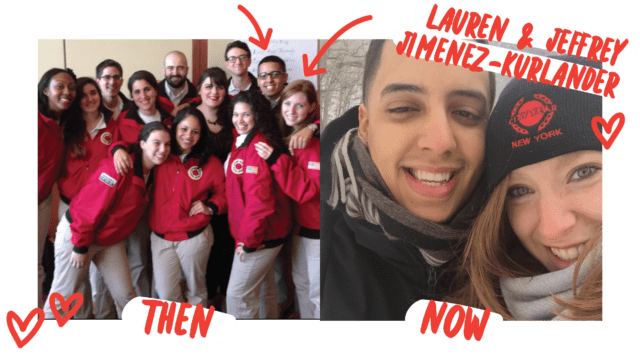 “On the day our City Year teams were announced, both Jeff and I were a little wary about being placed at Central Park East Middle School—the friends each of us made during orientation were assigned to different teams. During one of the first team exercises, Jeff shared that although others may not realize it, he is a sensitive person. We found ourselves drawn to each other from that moment on oftentimes video calling after work and competing in online chess for hours.

“Soon we began exploring the city daily, going to movies and eating at restaurants. Jeff taught me to dance bachata and merengue. Over the years the holidays have brought us unforgettable memories– getting engaged on New Year’s Eve in 2016, getting married on the weekend of my dad’s birthday in 2018 (with our City Year New York team members in attendance, one standing by my side as a bridesmaid), and welcoming our first beautiful child, Isabel Kai, on Halloween of 2021.

“Jeff supported me through medical school and remains essential in my success as a pediatric hematology/oncology fellow through Harvard University at Boston Children’s Hospital. I helped Jeff find his professional calling by encouraging him to get his master’s in public administration at NYU with a specialization in social impact, innovation and investment; he now serves as the Senior Analyst for the Learning and Grant Operations team at the Surdna Foundation.

“Without City Year, this Dominican boy from Washington Heights and Jewish girl from a New Jersey suburb would never have found such an unmatched connection and balance in one another.” 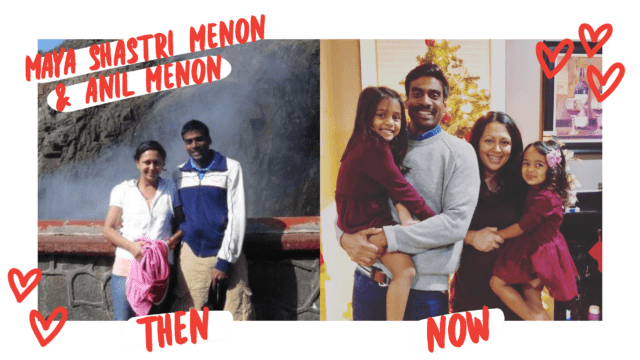 “Anil is originally from Ann Arbor, Michigan but decided to come to Chicago after college for City Year. I am originally from the Chicagoland area, so I came home after college to serve with City Year Chicago. We were both senior corps members at different schools in Chicago but became friends pretty quickly spending lots of fun weekends with each other and other senior corps members!

“Our commitment to education and service bonded us and we started dating during our City Year. Our year of service has contributed to who we are as individuals and also who we are as a couple. We got married in 2010 and had our two daughters in 2014 and 2016. We owe our relationship and our family to City Year! 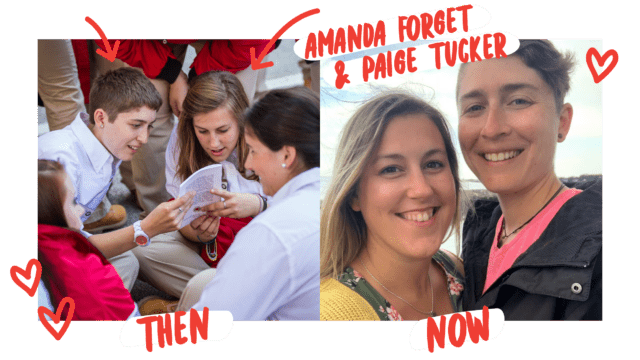 “Paige and I were lucky enough to meet each other during our first year of service with City Year New Hampshire. We both moved out of state, me from Rhode Island and Paige from Massachusetts, and connected over our shared experience of making a change from our original paths to join AmeriCorps.

“We were both taking gap years and neither of us were previously interested in working with students. We were no strangers to service, each of us having service experiences prior– myself with Heifer International and Paige with Appalachia Service Project.  I think that’s what drew us to AmeriCorps and I am so glad we both ended up at City Year. This was new and different for the both of us and that’s what made it so special!

“Paige and I were able to experience everything together and grow in so many ways throughout our time at City Year New Hampshire for three years.  Paige grew to lead a team of service members and manage projects. She continues to use all those skills she learned managing employees and helping to run a business in her current position. All of the event planning and training I was able to do in my second and third year of service helped me grow professionally as well. I get to stay connected to AmeriCorps members across Rhode Island by hosting events and service projects and train AmeriCorps grantees to run successful programs at ServeRI, the Rhode Island State Commission for National and Community Service.

“Both of us gained so much beyond what we could have ever imagined, including our sense of urgency to help others as much as we can. We continue to serve every MLK Day and have joined a local non-profit board in our home city of Woonsocket. Our time with City Year was invaluable and we will be forever grateful for all the people we met, the things we learned, and for the experience bringing us together.”

As a City Year alum, you can use your unique service experience to launch a career in tech! Learn more...

A City Year staff member shares how she uses baking to connect, tell stories and work through life’s toughest moments...

Read more about Mental health awareness month: one recipe at a time
Strengthening your job application

Here are a few tips from the members of City Year’s Talent Acquisition team—the people who facilitate the hiring process...