Our executive director, staff, alumni, board members and partners are committed to building a stronger Milwaukee by supporting and developing our AmeriCorps members as leaders in their schools and community. 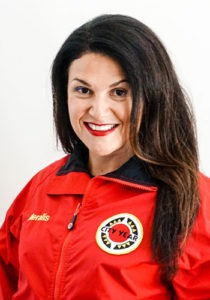 Meralis joined City Year Milwaukee in December 2015 serving as the managing director of impact. Prior to joining City Year Milwaukee, she was the assistant principal at Bay View High School in Milwaukee Public Schools, a City Year partner school. Meralis served as a bilingual teacher for nine years at MPS before moving into instructional coaching and administrative roles in the district. In 2012, Meralis received the Educator of the Year Award from the Wisconsin Association of Bilingual Educators.

After graduating from Hamilton High School and earning her undergraduate degree from Marquette University, Meralis followed in her mother’s footsteps and became a teacher in Milwaukee Public Schools. Meralis has a Master of Science in Curriculum and Instruction from University of Wisconsin-Milwaukee and a Master’s of Education in Educational Leadership and Administration from National Louis University. She was a part of the 2017 LEAD Cohort for City Year, an internal program aimed to sustain a culture of continuous talent investment aimed at accelerating the organization’s growth and cultivating future site leadership. Meralis participated in the 2018 Pahara–NextGen Fellowship, a twelve-month leadership program to shape the future of the educational excellence and equity movement. She is/has been a member of the following organizations: Leadership Advanced Milwaukee (2019), Georgetown University New Strategies Program (2018), Hispanic Professionals of Greater Milwaukee, Professional Dimensions, Oak Creek Assembly of God and Milwaukee Public Schools’ Emerging Leadership Program (2013). Meralis has also been named as one of the Wisconsin’s most powerful Latinos in 2019 by Madison365.

Meralis was born and raised in Milwaukee after her mother was recruited from Puerto Rico to serve as a bilingual educator in the city. Currently, she and her husband, Nakia Hood, are raising two beautiful girls, Salma and Sadie Hood who compose the roots of her motivation to continue to do this work.

The Executive Board is a collection of experienced professionals who are committed to ensuring that our organization is constantly striving...

Their generosity helps us support more than 390 students. Together, we’re contributing to a clearer and bolder vision of what public schools can...