Our executive director, staff, alumni, board members and partners are committed to building a stronger Los Angeles by supporting and developing our AmeriCorps members as leaders in their schools and community. 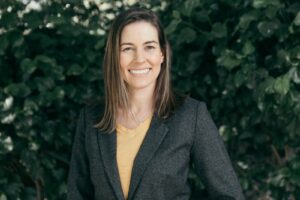 Erin Ross currently serves as the Interim Executive Director for City Year Los Angeles (CYLA). Previously, Erin served as the Senior Managing Director of External Affairs at CYLA, leading the site’s public and private funding strategies, government relations, community partnerships and marketing and communications work. Erin began her career at City Year on the Los Angeles start-up team in 2006, where she was instrumental in founding the site. From there, she ran the development department for more than a decade, building the strong base of donors and champions that have helped the site grow and sustain. More recently, she led the site in efforts to grow public revenue, including leading a strategy to access state dollars, expand into Inglewood Unified and renegotiate City Year’s contract with LA Unified.

Prior to joining City Year, Erin was a member of the founding team of United Leaders, a national non-profit focused on training the next generation of political leaders. For her work at United Leaders, she was recognized with the Gleitsman Foundation Award of Achievement and featured in The Los Angeles Times, Boston Magazine, The Washington Post, “Taking Back the Vote” and more.

Erin proudly serves on the Board of Changeist (formerly Big Citizen HUB) and the Board of Advisors for the Tisch College of Civic Life at Tufts University. She is also a member of the NationSwell Council.

Our alumni board is dedicated to civic leadership and advancing City Year Los Angeles' work in our community.

Our Associate Board is committed to supporting and promoting our AmeriCorps members and organizational goals.

Our board brings to City Year Los Angeles their expertise and commitment to local communities and schools.

Read our stories about City Year AmeriCorps members and their students, alums and partners and learn more about our work...