Our executive director, staff, alumni, board members and partners are committed to building a stronger Columbus by supporting and developing our AmeriCorps members as leaders in their schools and community. 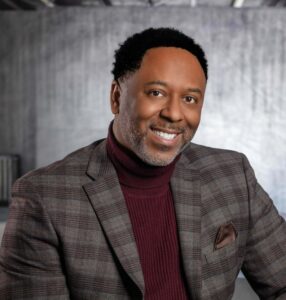 Adero Robinson serves as the Senior Vice President, Executive Director for City Year Columbus. In his other role as Chief of Staff, he is charged with overseeing the activities of the Executive, Human Resources, and Operations departments. Additionally, he collaborates with leadership to develop and implement long-term strategic plans and operating goals.

Adero has over 26 years of nonprofit experience. He began his career as an AmeriCorps member with City Year Columbus serving as a tutor and mentor in a Columbus City Schools 5th grade classroom. Adero then transitioned to a Project Leader, where he supervised AmeriCorps members serving at Gladstone Elementary School.

Later, as a Community Development Specialist with the Columbus Compact Corporation, Adero worked to improve the quality of life in Columbus’ central city neighborhoods through the implementation of high-impact community-based projects. During his tenure as a Senior Impact Manager with the United Way of Central Ohio, Adero led the Neighborhood Partnership Center and worked with education, health, and neighborhood-based non-profits on funding opportunities, programming, and capacity building. Adero also served as the Director of Education Services for the Columbus Urban League and as a Project Manager with Battelle for Kids.

He has received several community awards, including a national Comcast Leadership Award. Adero has also participated in several local and national leadership programs and has served in a leadership role on several non-profit and community boards and committees. Adero holds a B.A. from Denison University and an MBA from the Keller Graduate School of Management.

He is married to Tracy Robinson and is the proud father of four children and three stepchildren. In his spare time, Adero enjoys spending time with family, reading, watching Netflix, traveling, and coaching youth basketball. He is a 2nd-degree black belt and enjoys practicing and teaching karate.

These talented professionals are passionate about working together to support students.

Our board is a dedicated group of local corporate, government, nonprofit and community leaders working together to advance our mission.

City Year depends on committed public and private sector partners in Columbus to support our work in schools.