I have an 8th grade student in my third period who is often filled with energy, and sitting still in the classroom for long periods of time can be extremely difficult for him. On one day in particular, I noticed that he was stirring in his seat, constantly getting up to stretch, sharpen his pencil, or ask the teacher a question. I approached him and asked if he was having a high-energy day. When he said yes, I offered to take him out to the hallway for a few minutes to exercise out that energy. He agreed, and once we were out there, he told me that he enjoys dancing as a form of working out, but needed some music that he could dance to. 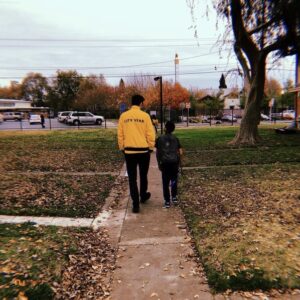 Knowing that I didn’t have the capability to play music for him, I offered to beatbox instead. He was surprised that I could even be capable of doing that for him, and said that it was a great idea. We spent the next couple of minutes together outside, me beatboxing and him dancing to it, joy and humor on his face at the whole situation. Once he was calm, we went back to class, and he was able to focus for the rest of the period. Now to this day, whenever he comes to class, he now calls me his “brother” and gives me a fist bump. I’m grateful that I got to build that relationship with him, help him to focus on his studies, and get to utilize my musical abilities in the process!

Power Greeting at a New School

Power greeting is a part of the City Year culture that is seen often in the schools we serve. This...

Going out to the yard, playing with the kiddos, and connecting with students makes me feel closer to them and...

The first two weeks of in-person/hybrid service were definitely challenging as I juggled teaching students virtually and in the classroom....