From cheerleading and basketball, to science, dance, and even film-making club, City Year’s work isn’t just done during the school day, but in a broad range of afterschool programs.

These programs not only allow students to be within a fun and safe space for a few additional hours at the end of the school day, but they also give our City Year AmeriCorps members the opportunity to create deeper connections with the students they serve.

On Wednesday May 29th, William McKinley Elementary school was the host site for City Year Philadelphia’s 1st annual Hoops and Mentoring basketball tournament. Hoops and Mentoring is an afterschool program that originated with this year’s AmeriCorps team serving Penn Treaty School. The premise is simple: to combine mentorship and sportsmanship.

When other AmeriCorps teams caught wind of the program and its success, they decided to join forces and create something that other City Year Philadelphia students could have the opportunity to be a part of.

So on a cloudy afternoon in May, over 60 students from six different City Year Philly schools competed to claim the title of victor of the first annual tournament. 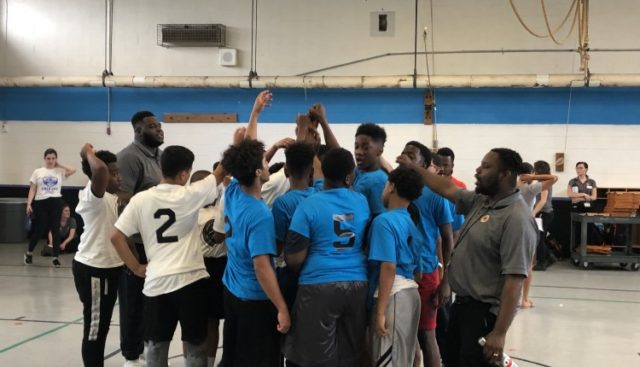 “This event is important to me because I grew up playing basketball and it is a great way for me to make connections outside the class room with my students,” says Colleen Hagan, City Year AmeriCorps member serving at Warren G. Harding Middle School. “I’m excited to see my students in a different light. Also, the event allows the kids to build community. Today, the kids from my school are on a team with students from another school, allowing them to meet and work with others they may not know.”

The smell of competition was in the air throughout the entire afternoon. But emotions stayed in check as students realized that sportsmanship and comradery trumped all. When a team lost a game, instead of pouting there were pats on the back. When a hard foul was made, students helped one another up and shook hands.

Congratulations to the blue team for winning this year’s tournament! City Year AmeriCorps member Aaron Cooke who was the coach of the winning team says, “This win could not have happened without my team acting as a team. Most of the students know one another, not all, and this just goes to show that teamwork and understanding go a long way.”

At the conclusion of the three-hour tournament, students and AmeriCorps members gathered for an award ceremony and words of encouragement from special guest and retired NFL linebacker Lee Woodall.

Whether some intended for this event to be solely a basketball tournament, it can be said that it served as a perfect team builder. Likewise, the tournament helped build character. The students not only competed on the court, but they indirectly learned life lessons that could be used off the court, perfectly reflecting the mission of Hoops and Mentoring.

The intent is for City Year Philly’s Hoops and Mentoring basketball tournament to become an annual event for more students and more corps members to look forward to, supporting City Year’s mission to not only provide opportunities for students to grow and learn within the classroom, but also outside of it.

If you are interested in mentorship, working with students inside the classroom, and in programs such as Hoops and Mentoring, consider serving with City Year Philadelphia. Submit an application to join our corps. Applications are rolling throughout the summer so submit yours today!