Amber Cox first learned about City Year when she was pursuing a bachelor’s degree in business management at The College of New Jersey. It was described to her as a “domestic Peace Corps” by fellow College of New Jersey student Dave Weinstein, who would also go on to work for City Year, and the idea stuck with her. Between her junior and senior years, she decided to get her first taste of the organization by working as a marketing intern. She fell in love with City Year, and after a little nudging by her manager during her senior year, she decided to do an AmeriCorps service year after graduation. 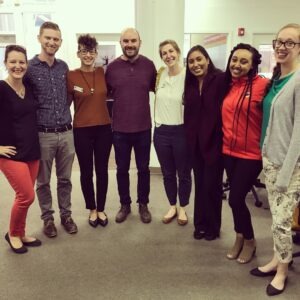 From 2009 to 2011, Amber served with City Year Philadelphia (CYP) as a team leader at Thurgood Marshall School, working directly with Philadelphia students to support their education, before applying for a staff position at CYP. During her time here she worked as an impact manager, instructional coach at James G. Blaine Elementary School, and lastly as director of learning and instruction.

After 10 years of working for CYP, Amber left the organization in 2019 to teach fourth-grade literacy and social studies at Blaine Elementary, in addition to pursuing a master’s degree in Pre-K through fourth-grade education and a teaching certificate at St. Joseph’s University.

City Year Philadelphia recently had the opportunity to have an in-depth conversation with Amber about her experiences as a CYP corps member and staff member and as a Philly schoolteacher!

What did you enjoy most about your time as a Corps member?

I had a unique experience because I started as a team leader, which we don’t even do — “we,” I refer to City Year as “we” a lot still — but City Year doesn’t really do that anymore, at least not in Philly. So, I had a unique experience in that I started as a team leader. I guess there are two things. One was always getting to work with students and see them learn and grow and getting these personal connections with students. 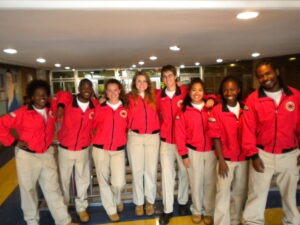 Even though it wasn’t my direct role, I kind of insisted that if I was going to be hired as a team leader that I would still get to work with students. The second would be seeing the growth of the team and what the team as a whole was able to do. I think this is another unique part of being a team leader; you see, holistically, the actual impact that’s being made.

Did your time coaching at Blaine Elementary influence your decision to become a teacher there and start working on your master’s degree?

I would say more so my corps member years and getting to work directly with students. At the time I don’t think I recognized this, but that’s where I got my energy and where I was probably the happiest in my work and what I was able to do. That’s why I left City Year because there’s no way they were going to make me a team leader again, so my only option was to go back and do something different where I could directly work with students. I think that was kind of what drove me back, because, for me personally, working with students is the thing I’m most passionate about. I would say my role in coaching maybe solidified my belief that teachers are so critical, they are the most important factor in students’ success, and I firmly believe that our students deserve great educators who are willing to stay with them.

Let’s discuss the COVID-19 pandemic and the challenges it poses to your work. Do you feel like you’re able to have a bigger impact because of the skills you acquired at City Year despite the challenges we’re facing now?

It’s hard for me to know what my experience would be like without my City Year experience, but I’m fairly confident that it would not be as strong. Do I think that I might be able to make that big of an impact on my students this year? No. But I think that’s because this type of learning seems developmentally out of order for them. I teach 9- and 10-year-olds, and for virtual learning, we’re basically asking them to manage their own time. That’s a lot. That’s a lot for an adult, let alone a 9-year-old. Students have to do the thinking and have to do work in order to learn, and getting them to do those things is extremely challenging. Those are things that could be managed by a teacher in the classroom but is very difficult to manage in the virtual setting.

What I do think is that my time at City Year taught me that you can always get better and you can always improve and that nothing is ever a lost cause. It helped me see how that works in education, so there’s not ever going to be a day when I don’t try. So, City Year has helped me to know that if you keep trying, you might hit on it. And sometimes you don’t, but you just don’t give up.

What advice would you give to current AmeriCorps members and people who might be considering joining City Year?

I think my advice right now goes back to what I already said, to not give up. Particularly in the virtual setting we’re in. Students want a connection, they want structure, they want someone to be looking out for them, so don’t give up. Keep trying because the students need you, and ultimately, I think small-group is going to be the only chance for success for students in a virtual space, which is what City Year does. So, keep trying, keep doing the small groups, because I think that will have an impact on whether you see it or not.

And then advice to people coming in: plan ahead. Just be ready, because I think if you do City Year AmeriCorps, you’re right, go all in. It’s only a year or two years, and it is giving a year of your life to something else and serving, so know that you’re supposed to be giving something up to do this. I think that’s the value in City Year, you get these people who are super committed to their students, and they do it for one year.

Amber is just one of thousands who have dedicated their careers to helping our students. If you would like to commit a year of service to support youth in education, learn more about applying to City Year Philadelphia on our website.