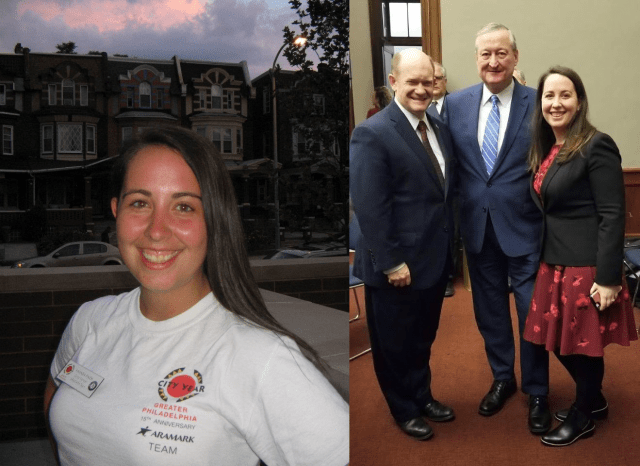 Left: Amanda Gamble during her time serving with City Year Philadelphia in 2011-2012.

Right: Amanda with Mayor Jim Kenney and Senator Chris Coons from a roundtable event on reducing barriers to service.

Throughout Women’s History Month in March, City Year Philadelphia (CYP) staff and AmeriCorps members celebrated female leadership and highlighted the inspirational women who have made an impact on history, our communities, and our lives.

To close out the month, we’re spotlighting a female leader from our own CYP alumni community: Amanda Gamble, who served with the Civic Engagement (CE) team in 2011-2012. Since graduating from City Year, Amanda has worked for the City of Philadelphia in a variety of roles within the Mayor’s Office of Civic Engagement and Volunteer Service, starting as an AmeriCorps VISTA in 2012. In her current position as Chief Service Officer, Amanda oversees several national and local service programs, with an overall focus on “reducing barriers to service so that everybody in Philadelphia can envision and create lasting positive change.” You can read more about her work in this Philadelphia Inquirer article.

Amanda first learned about the opportunity to serve with City Year from another CYP alumnus, Alexander Peay (CYP ‘10 and ‘11), when she was an undergraduate student at Ursinus College. As a college student, Amanda participated in the Bonner Program, in which she organized a variety of community service opportunities for other students. She saw City Year as the perfect way to continue engaging in community service after college—and she hasn’t turned back since!

Read our Q&A with Amanda to learn more about her City Year journey, her current role with the Mayor’s Office, and her experiences with being a female leader in government. (Note: Interview responses have been edited for length and clarity.)

What did you enjoy most about your time as a Corps member?

What I enjoyed the most about being on the Civic Engagement team was that I got to spend time in so many neighborhoods all over Philadelphia—I didn’t have just one school that I was serving with. It really gave me the chance to see the city and the school landscape from a different perspective. I initially went into City Year thinking that I was going to be serving in classrooms, and then during my orientation I learned about the opportunity to be on the CE team. It felt like a continuation of my service work in college—and being in my current role is certainly continuing that, as well.

How did your time serving as a Corps member prepare you for your current role?

The connection to different neighborhoods in Philadelphia is definitely key. I was the Outreach Coordinator on the CE team, and we worked in neighborhoods across the city to put on these large-scale service projects. I was able to do some great outreach in different neighborhoods that laid the foundation for my understanding of the importance of meeting people where they are, and the importance of connecting with communities to help them understand what’s happening in their neighborhoods. I think that’s a really important part of what City Year does; even if you’re serving in schools, those schools end up being important social service hubs.

As Chief Service Officer, one of the things that I’m doing a lot of work on is reducing barriers to service. I felt like my time serving with City Year and as an AmeriCorps VISTA with the City of Philadelphia was so impactful and influential on my career, and it really brought me to where I am now. That opportunity should be accessible to everyone.

How has the COVID-19 pandemic impacted / posed challenges to your work, particularly regarding the vaccine rollout for AmeriCorps members in Philadelphia?

One of the things that’s been helpful is that because we’re coordinating amongst all the national service programs and AmeriCorps programs in Philadelphia, we’re able to impactfully make things happen. For example, at the beginning of the pandemic I was able to coordinate with Maureen Eccleston, the Executive Director of PennSERVE, to sign an executive order to redeploy AmeriCorps members to serve in whatever areas we needed as a City during the pandemic. Specifically school meal sites, because as a city we wanted to make sure that there weren’t any lapses in students receiving school meals even though schools were closing.

For coordinating around vaccines, having somebody in my position is really helpful in advocating for AmeriCorps members and making sure that the Department of Public Health doesn’t forget about these important folks who are serving in schools and might not be included on a teacher or staff list, but are still essential. I was able to work closely with Maureen to get AmeriCorps members connected to vaccines so that they can return to schools at the same time as kids.

When I was younger, I always wanted to work in some type of social services organization, but I never thought about government. In school, subjects like social studies and civics were never my favorite classes. And I wonder how much of that is because of a lack of representation; it’s mostly white men that you learn about. Being at a moment where we have our first female, Black, and South Asian Vice President, and being able to see representation in those spaces is so unbelievably important. Being able to be someone like that for individuals who are serving in City Year or as our AmeriCorps VISTAs—to show them that I was in their shoes and now I’m in this role—is really important to me.

I’ll never forget the moment when I got promoted to this position. I went to our current VISTA Corps and told them the news, and they just started cheering. And I could see that it was because they could see themselves in that space. I think it really means a lot to folks to see someone who came through that same pathway.

In terms of challenges, I think that government is sometimes hard to work in. It moves really slowly, especially for those of us who are working in this progressive space within government—like trying to reduce barriers to service and make these equitable changes. The organizations themselves are just so slow and old and steeped in white supremacy and patriarchy. It’s a constant push against those institutional barriers.

What advice would you give to current AmeriCorps members and those who might be considering serving with City Year?

Make sure to make the most of your year and take advantage of every opportunity, because it goes by so fast—even when you’re working those exhausting long days! Build as many connections as you can, and just know that your connection to City Year never goes away. I served for one year, and I still stay in touch with people that I served with and staff members at City Year. I owe a lot to City Year for embracing me as a young post-undergrad individual and helping me learn and grow, and I always want to stay connected to that because I think that professional development and mentorship of young folks is so unbelievably important.

Are you or someone you know interested in serving with City Year? Our next application deadline is on April 16th! Learn more and start your application at www.cityyear.org/apply-now.