The Road to Citizenship

On April 11th, we both had the opportunity to take part in a United States Naturalization Ceremony in Yarmouth, Maine. One of us, Olga Remesha, and her family experienced the ceremony first-hand as individuals being naturalized and the other, Andrew Morin, witnessed the ceremony from the audience. We were also fortunate enough to be joined by the rest of our school team from Northwest Elementary and several staff members from City Year New Hampshire. What follows is a discussion we had about the ceremony, the process of being naturalized, and what it means to be a newly naturalized citizen of this country.

Andrew: Let’s get started. It’s been how long since you became a US citizen?

Olga: Um… about a month and a half?

Andrew: And where are from?

Olga: I was born and raised in Bujumbura, Burundi. My family and I moved to the US eight years ago and I was 16 years old at that time.

Andrew: Do you feel any different now?

Olga:  No, I don’t. I feel the same, I don’t think a lot has changed. I do think there are more things accessible now because I am citizen.

Andrew: Have you thought about it a lot in the last month in a half?

Olga: No not really (laughs). I guess one thing that I am excited about is that I can finally go home. Once I get my passport. Before, if I wanted to go home, I would not have had protection. Now if I go as an American, I can use that passport and that will help.

Andrew: So explain a little bit about your status before you became a citizen.

Olga: I came to the US as an immigrant. My family and I brought ourselves here on a one year visa. And because of my asylum status I wasn’t able to travel places.

Andrew: So do you feel like that passport is one of the biggest benefits of becoming a citizen?

Olga: To me that is the biggest benefit as far as the things I have researched. Because I can travel.

Andrew: Was there any point before you became a citizen where you did not feel safe regarding your immigrant status? Do you feel more secure now?

Olga: Now I do feel more secure. So with the stages you become an asylee, then a permanent resident, and then a naturalized citizen. I think the stage where my family and I were still asylees was the time I was most worried. Because if the US did not grant us asylum then we would have been deported. So that was the time where we said “we have to do this right” because if not we would have to go back home. But now that is not a worry.

Andrew: Have you talked to your family about the ceremony since that day?

Andrew: Because your mom and your brother became a citizen with you on that day, right? How did it feel to go through that process with them?

Olga: It was amazing. We have been going through this process since the beginning. We started this journey together and when we got to that point together, after 8 years, when we heard that we were naturalized citizens it felt so good. It was like we reached the finish line.

Andrew: Also at the ceremony there was a lot of people from City Year New Hampshire and your school team from Northwest Elementary. How did it feel to have them there?

Olga: I was so happy to have the feeling of having all of you there. I never expected to have all of you there. It was such a huge moment for me and my family as well. They had never met anyone from City Year before. They were able to see that I have a family here at City Year and with the Northwest team so that if anything went wrong, they know that I have people there for me.

Andrew: Obviously, your students weren’t at the ceremony, but have you talked to any of your students about your citizenship ceremony?

Olga: I talked to a few of students about the process, but they did not really understand it. I also had a discussion with my lunch group and explained the status I held before and what it means to be a naturalized citizen now.

Andrew: Are there any students in your class you’ve come in contact with that either they or their family members have had to go through the citizenship process or are in that process right now?

Olga: One of my students and his family went through the same process but he was too young to really comprehend the meaning it holds.

Andrew: Do you think it’s hard to explain to students who do not know what all of this is?

Olga: It is hard to explain, not even to students or young children but to adults who do not know what an asylee is or permanent resident is.

Andrew: Yeah, very few people have gone through the process relative to the rest of the population. Have you talked about it with your partner teacher?

Olga: We often talk about it and she understands the difference, but I don’t think she knows anyone else who has gone through that process.

Andrew: So, talking about the ceremony specifically; one of the speakers Charlotte Agell, a teacher at Harrison Middle School in Yarmouth, Maine and the keynote speaker at the ceremony, said that becoming a US citizen is just as much about what you are losing as it is what you are gaining. So things like your home, your language, your culture. Do you feel like her words are an accurate representation of what you have experienced?

Olga: Her words are very accurate. An example I can give is about culture and language. My parents still hold on to our Burundian culture as much as they can while trying to learn the American culture. On the other hand, my siblings and I are different. We have lost a part of our Burundian culture and have gained a part of the American culture. When it comes to language, we do speak Kirundi and French at home and mix in English and sometimes whatever word comes easier first is what we say.

Andrew: And in Burundi, were you speaking mostly French and Kirundi?

Olga: In Burundi, we spoke mostly Kirundi and some French. It also depended on the school you went to, if they spoke more French or Kirundi.

Andrew: Now, you’ve been living with most of your immediate family, your parents and siblings. Are there still family members in Burundi?

Olga: Yes, other than my nuclear family, everyone else is still living there.

Andrew: And because you haven’t been able to travel, you haven???t had as much contact with them?

Olga: We call each other a lot but we have had no physical contact.

Andrew: Now that you are a naturalized citizen, do you think it will be easier to travel to see them?

Olga: Yeah, it will be for sure. It’s one of those things you gain for being a citizen.

Now I have some questions for you, if you don’t mind. I know you advocated a lot for the entire team to go to the ceremony, why was it so important for you?

Andrew: There are two reasons. One is that everyone on the team really cares about you and we knew that this was an important milestone for you and your family. You have been working so hard to see this day and knowing how important it was for you and your family, it was really important for us to also experience that and be there to support you. The second reason is that it was a great opportunity for people who don’t have to go through this process. Everyone but you on this team is an American citizen from birth. Having this opportunity, especially while in City Year with the main goal being to build democracy and engage individuals civically. Obviously we didn’t go through the eight years, all the paperwork and all the uncertainty that came along with this but being able to experience some part of it, I thought it would give us a better perspective of what it means to be a naturalized citizen. Right now, that’s a big a topic that people are discussing, what it means to be an immigrant or an American citizen. Since it was the first ceremony for most people, taking part in that process was going to be beneficial for people on this team, for your roommates, and some staff members who were present.

Olga: I really loved the idea (laughs). I never thought the entire team would be allowed to show up.

Andrew: And it wasn’t only our team, your roommates were there and staff members. How did that feel?

Olga: I felt happy and honored for everyone to be there to support me.

Andrew: I am glad that happened.

Olga: No, I didn’t. It was just such a short event after waiting eight years for it.

Andrew: Yeah, that is true.

Andrew: Thank you very much Olga.

Olga: Thank you Andrew for everything. 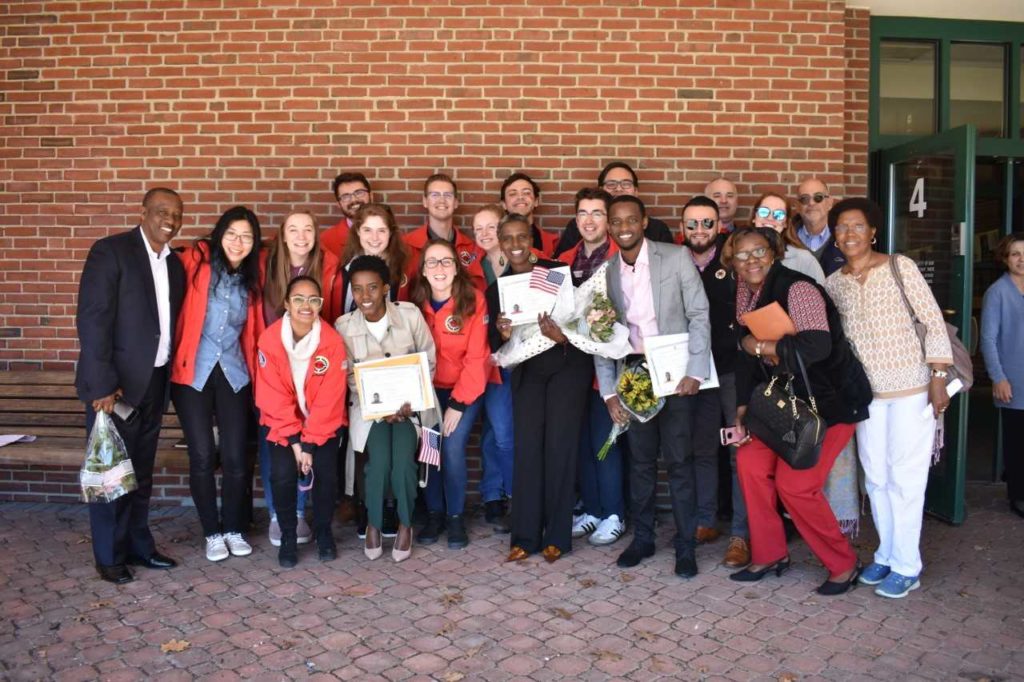