Planning McDonough’s literacy night was the most exhilarating, exhausting, stressful, and rewarding thing I have done at City Year (or ever, really). The purpose of family engagement nights is to encourage collaborative learning within families. McDonough’s literacy night on Thursday, April 4th was even more intense than the usual fare. Besides our portion of the event, which involved participants playing games to practice their literacy skills like fluency and comprehension, we also had the Scholastic Book Fair going on across the hall, and every class was displaying their English projects outside their classrooms. The building was absolutely packed (the final numbers came out to well over 2,000 attendants).

We only had about a month to plan and execute the event. I spent every moment of that month terrified that something would go wrong, that there was some detail that I was missing somehow. I probably would have burnt myself out by the second week if I hadn’t had my incredibly competent and capable team to support me throughout the entire process.

Our first step was to choose the theme, which was outer space. I then made up a Google Sheet with tabs for each station, decorations, and more. I decided on a list of everything that needed to get done and made sure to send my team several emails a week. I’m sure by the end of it they were pretty sick of seeing my name show up in their inbox! Even so, it helped us stay on track so that we could execute everything on schedule. 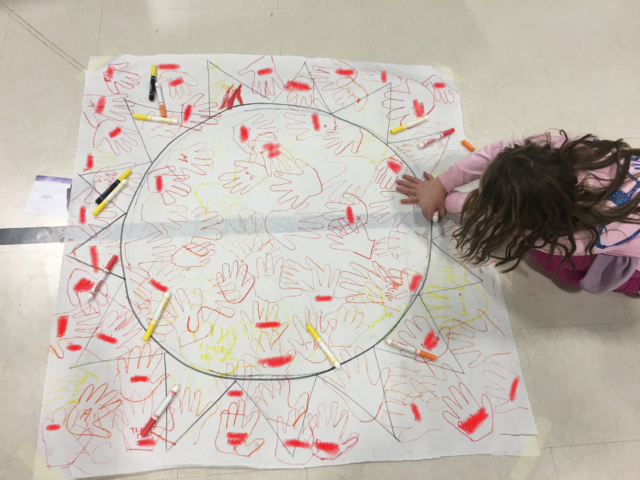 In addition to their individual activity stations, which are games to practice literacy skills like using a spatula to identify different parts of words and finding grammar mistakes in stories about Penny the space cat, each person signed up for something extra, like designing the flyers. On the week of the event, we went to the office every day after service to finish the preparations. Somehow I managed not to get a full head of gray hair by the time Thursday rolled around. The book fair was setting up in the cafeteria at the same time, so it was a whirlwind dodging PTA volunteers and cartons of novelty erasers. I was a bit frantic as I buzzed around the school, but thankfully I had my team to keep me grounded and help set everything up.

Somehow we managed to get the gym decorated and all the stations ready before the first families arrived. We had taped paper “alien feet” to the floor to guide people toward the gym, which the little kids got a real kick out of. It was a slow trickle at first, but by the second hour we had a veritable flood of families pouring into the gym. I walked around making sure that volunteers were all set, pizza hadn’t run out, and students were enjoying the stations. Everyone I spoke to told me they were having a blast. I got to see a few of my own students, and it was very exciting for them to see Ms. Milonas marching around with a clipboard like somebody very important.

Even though I had spent the previous four weeks or so going nuts over the most minute details, as I walked around the event, I realized that I never had to worry at all. I saw the joy on the faces of my fellow corps members as they interacted with the students, especially when volunteers from other schools were reunited with students with whom they’d connected during Camp City Year. More importantly, I saw how much fun the students and their families were having. The smiles on the children’s faces when they got a question right and turned to their parents to celebrate their success—really, there’s nothing like it.

The stations were arranged like the order of the planets in the solar system, and at the center of the room was an enormous piece of paper on which we’d drawn a sun. Students could trace their handprint on the sun in orange and yellow marker. That piece of paper now hangs in our team space at the school, and looking at it, I feel the full weight of what that night meant, not just to our team but to our students and the larger Manchester community. Our children are the life-giving flames at the core of our service, the why behind everything we do at City Year. Like I said, planning that night was one of the most stressful things I’ve ever done. I also know that I would do it all over again, every agonizing moment, if it meant I could inspire in our students that joy and passion for learning.