Making a difference to the students that need us most

All kids have the potential to succeed. But the more than 10 million students living in poverty in the United States are twice as likely to face traumatic experiences that interfere with their ability to arrive at school every day ready to learn. These students need extra supports to succeed, but there is often a gap between what these students need and what schools in high-need communities are designed to provide.

Launched in the U.S. in 2015, Red Nose Day is a fundraising campaign dedicated to ending childhood poverty, both in the U.S. and around the world. The money raised by Red Nose Day in the U.S. has benefited programs for children and young people in all 50 states. This year, in partnership with Comcast NBCUniversal, Red Nose Day is supporting 24 teams of City Year AmeriCorps members in 19 high-need communities across the United States. These 24 teams – in all more than 200 City Year AmeriCorps members – are working to build positive relationships and provide academic supports for students in schools where more than 75 percent of students are considered socioeconomically disadvantaged. 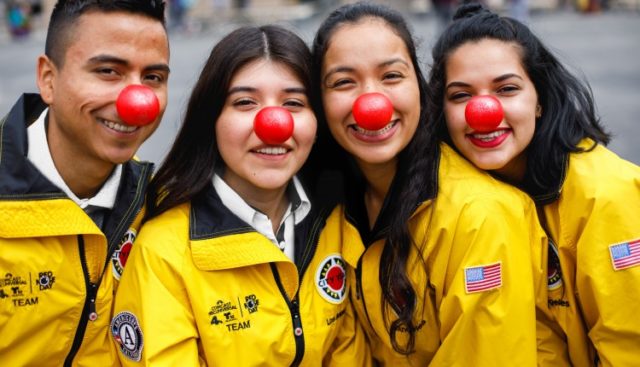 This support from Red Nose Day has allowed City Year to meet and work with talented and hardworking students like Luciana*, a middle school student in the Koreatown community of Los Angeles, California. Luciana’s family immigrated to the United States when she was young. For as long as she can remember, her father has worked incredibly long hours to support their family, and Luciana doesn’t get to spend much time with him. As Luciana worked to balance her home and schoolwork responsibilities, she started falling behind in school—especially in math.

This year, Luciana met Jennifer Gutierrez, a City Year AmeriCorps member who is serving in her school. Each day, Jennifer arrives before the first bell rings, and stays through the afterschool program to provide tutoring, mentoring and support to students throughout the day. “Ms. Jenny,” as Luciana came to know her, and Luciana found an instant connection since Jennifer’s parents were also immigrants who worked two jobs to support her family. As the two spent more time together during the school day, Luciana and Jennifer built a trusted relationship.

Jennifer noticed that Luciana was often preoccupied with the stress and responsibility she felt knowing what her family was going through while she was at school. Jennifer noticed Luciana would be outside of the classroom, sometimes in tears. She worked with Luciana to help her stay focused in class, reminding her of all the adults at school who were there to support her. After these check-ins, Luciana was no longer leaving the classroom. Instead, she was at her desk ready to learn.

As Jennifer got to know her, she saw in Luciana a self-directed learner. When Luciana was focused, she knew how to problem solve and what questions to ask to help her reach an answer. Throughout their year together, Luciana grew more confident in her abilities. She found Jennifer to be reassuring, and their conversations helped manage her feelings of distraction and stress while at school.

Now, Jennifer sees Luciana get excited about school and learning. Jennifer is there to celebrate her success in understanding fractions, but also there to offer additional support when Luciana is having difficulty with calculating volume or solving word problems. Luciana has become more focused when it comes to her academics and looks forward to seeing Jennifer and other City Year AmeriCorps members each day.

“City Year is always prepared for when I come to school,” Luciana says. “I know that if I ever need something, I can come to any City Year without having to think about it.”

“I admire Luciana’s resiliency,” Jennifer says. “She practices ways to remain engaged in school and continues to work hard even when she experiences a setback.”

Over the course of just 10 weeks, Luciana’s math score has risen a full grade letter. She also grew 245 points on her Math Inventory between September and April, moving from a basic score to proficient. Her confidence has grown since meeting Jennifer, and she believes she is capable of succeeding in school, even when her City Year is not around. She plans to use the skills she has learned with Jennifer to help her focus on accomplishing her goals in the remainder of her middle school career and beyond.

Sometimes placing a single caring mentor in a student’s life can be the difference in whether or not they succeed. Red Nose Day returns with a night of programming on May 24 on NBC starting at 8/7c, concluding with NBC’s fourth annual Red Nose Day Special at 10/9c hosted by Chris Hardwick. Tune in and find out how you can help support or visit www.rednoseday.org.