City Year Providence AmeriCorps alumnus Justin Roias knows firsthand how positive relationships with caring adults can help children succeed as they navigate their educational path. “My high school guidance counselor helped propel me into a life of service by inspiring me to explore opportunities that would give me a vehicle to change the world,” he says.

Growing up in Rhode Island, Justin describes his childhood as “unstable,” full of obstacles many kids never have to worry about. He credits the mentors and role models he had along the way for guiding him during these critical times and sparking his exploration of the question, “What can I do to give back?”

“I saw children and families in my own backyard struggling, and wanted to do something impactful,” says Justin. “I didn’t know where to start, but I knew I had a stake in my own community and wanted to make a difference.” As the first person in his family to finish high school or earn an undergraduate degree, Justin was inspired to seek an opportunity that would help children reach their full potential. His search brought him to City Year, and through his two years of service, he built close-knit relationships with students that illustrate the transformational power of genuine connections between caring adults and students.

“My journey with City Year was challenging, but rewarding,” Justin says. “So many of the students I interacted with were just looking for someone who would actively listen. City Year allowed me to build trust with students and strong near-peer mentoring relationships. That one-to-one relationship can change a student’s whole outlook.”

One of the students Justin interacted with regularly during his service at Gilbert Stuart Middle School was a young man named Manny.* After being accidentally shot during a gang altercation at age six, Manny lives with anxiety that has hindered his readiness to learn and caused him to miss school on occasion. Justin and Manny formed a strong bond by spending time together talking, playing basketball and walking the halls together, and this relationship has helped Manny open up to other peers and teachers. “He motivates me. He’s the best person I ever met in the world…I have no other people like him…that’s always on me, pushing me,” Manny told the Christian Science Monitor. “Ever since I met with Justin the first time, it was a big difference for me. I felt like he cared for me.” 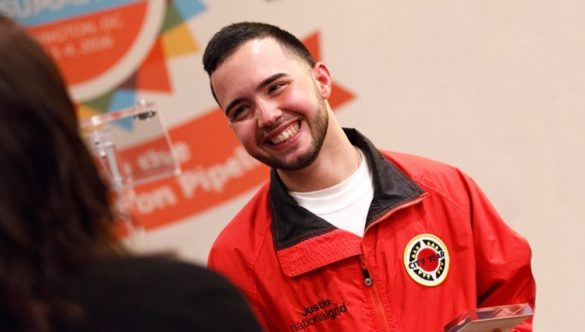 “Manny has a great personality and has overcome so much,” Justin says. “I’m proud to have been a role model and consistent figure in his life, but he doesn’t know that he’s also showed me how to listen better and be more present in my daily life. I’m grateful to know him.” Manny is still working hard to get to class on time, and continues to focus on academics. Even though Justin is no longer present in Manny’s school on a daily basis, Justin says they keep in touch regularly through phone calls or the occasional outing to a Providence College basketball game.

Because of his impact and his commitment to his students, Justin was honored with the 2016 Eli J. Segal Bridge Builder Award, given to a City Year AmeriCorps member who embodies City Year’s core values and has shown exemplary leadership. Today, Justin works as a college advisor at College Crusade of Rhode Island, where he helps high school students navigate their path to higher education. He describes this opportunity as rewarding beyond words. “As an advisor, my greatest joy is when kids submit their college applications and get that acceptance letter,” he says. “As a first generation high school and college graduate myself, I know what that moment means. When I see my students embrace their future, it brings me hope that I am helping empower the next generation of leaders.”

Justin sees his journey towards his current role as coming full circle from his days at City Year. He says the relationships he formed as an AmeriCorps member have helped him guide the students he works with each day. “I feel like I grew up with City Year,” he says. “Because of my experiences with City Year, I will always invest in my community and young people who need extra supports. I encourage others to take an active role in building and sustaining healthy communities. When that happens, we all grow.”

* Manny’s story was featured in the Christian Science Monitor in September 2016. The article can be found here.