Supporting schools with the help of Red Nose Day

When Dalis Gott was a senior in high school, she turned to her teachers for support after losing her grandmother, who had played a stabilizing role in her life from a young age.

Only a handful of years later, she’s now giving back to teachers as a City Year AmeriCorps member and team leader at a school transformed by the pandemic in Little Rock, Arkansas. There, teachers have worked since last fall with two sets of students simultaneously—one socially-distanced and masked in the classroom and the other learning online from home.

“One teacher can’t do it all,” Dalis, 24, says. “A large part of our service this year has been to support them and relieve some of the stress of being a teacher during COVID-19.” 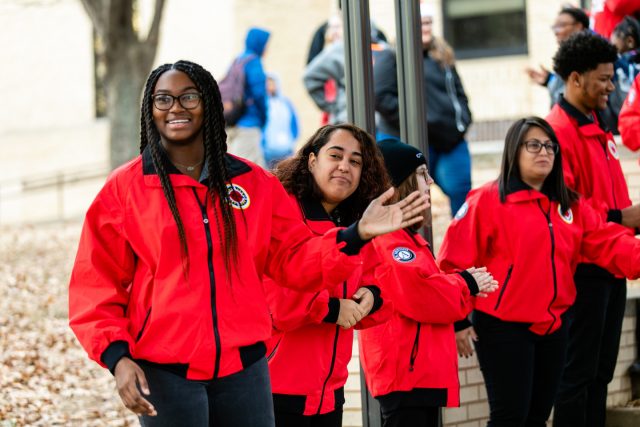 The full-time service of City Year’s 3,000 AmeriCorps members is enabling schools across the U.S. to help teachers, students and families manage the strain of shifting conditions during the pandemic. City Year works with 300+ public schools with the help of partners like Red Nose Day, which has supported the City Year team at Dalis’s school for the past four years.  Funds raised through Red Nose Day support nonprofits including City Year.

Since launching in the U.S. in 2015, the Red Nose Day campaign to end child poverty, organized by Comic Relief US, has raised over $240 million and helped more than 25 million children in the U.S. and around the world. Through a simple and fun call to put our “Noses on!”—which this year is a digital nose—Red Nose Day inspires Americans to join the campaign.

Funds raised through Red Nose Day are supporting children most affected by the pandemic as part of the campaign’s efforts to help address child poverty and the inequities that perpetuate poverty. COVID-19 has magnified those inequities through its disproportionate impact on Black, Latinx and other communities, including those served by City Year’s partner schools. Nationally, more than 90% of students attending City Year partner schools are students of color and about 90% qualify for free or reduced-price meals.

When Dalis returned for a second year of AmeriCorps service last fall at Cloverdale Middle School, the school day was radically different from a year earlier. For safety reasons, students are assigned permanent seats in the classroom and cafeteria, and are reminded often to uphold social distancing rules, avoid lingering in the hallways, wear their masks correctly and sanitize their hands. The restrictions can “limit kids sense of freedom and being connected,” says Dalis, who joined City Year to gain more classroom experience after earning her bachelor’s degree and elementary school teaching license.

Check out this video to see how City Year AmeriCorps members are connecting with students during distance learning.

To help students engage with each other and their teachers, Dalis’s AmeriCorps members facilitate virtual hangout sessions among peers and collaborate with teachers to make lessons fun. They also instill a sense of routine by maintaining a City Year tradition of meeting students at the school entrance every morning with music, energy and no-contact “air” fives—almost the same as prior to COVID-19. “Kids who at first pretend we’re not there are singing the songs with us by the end of the year,” Dalis says.

Seeing students open up and reach out, despite the challenges of a pandemic, has only strengthened Dalis’s resolve to become a teacher after her service—following in the footsteps of her late grandmother.