Getting a first chance to code with City Year

It’s a wintry, late afternoon in the Bronx, and teachers and students stream outside into the cold air at the end of a long day. Upstairs on the fifth floor, two dozen fourth-graders are staying after class to take advantage of an opportunity that will help them build skills for successful futures: an introduction to computer science and coding.

“Hour of Code,” is a one-hour introduction to computer science, designed to demystify “code,” to show that anybody can learn the basics, and to broaden participation in the field of computer science. Nationwide coding events begin in December during Computer Science Education Week and run throughout the year. Last December, more than 50 schools across the country and an estimated 3,000 students took part in Hour of Code in partnership with City Year.

This year, students will once again have the opportunity to learn new skills and spend time experimenting with the basic building blocks of computer programming. In New York, City Year engages more than 200 City Year AmeriCorps members across 15 New York City Public schools to participate. These students learn through fun, hands-on lessons and games. Learning opportunities like these are critical as computer science isn’t a regular part of the daily curriculum at many schools, despite the pivotal role of technology in every aspect of our lives.

Launched in 2013, Hour of Code has become a global movement, reaching tens of millions of students in more than 180 countries. More than just introducing students to coding, the program also seeks to spark interest in computer science and technology careers.

Since computing may make up more than two-thirds of future jobs in science, technology, engineering and math, students who learn programming will be better prepared to succeed in the workforce, yet only 35 percent of high schools in the U.S. teach computer science, according to Code.org. Studies show that people with computer and information technology backgrounds ultimately will earn higher-than-average pay, and be in greater demand, than many other employees in the decade through 2026, according to the U.S. Department of Labor.

City Year’s role in computer science education provides an entry point and exposure for thousands of students across the country. Working with our school and corporate partners, our AmeriCorps members provide access to high-quality in-school supports and afterschool programming that align with student learning during the day and provide exposure to skill-building enrichment experiences that spark interest, teach content, and increase awareness of rewarding career paths. 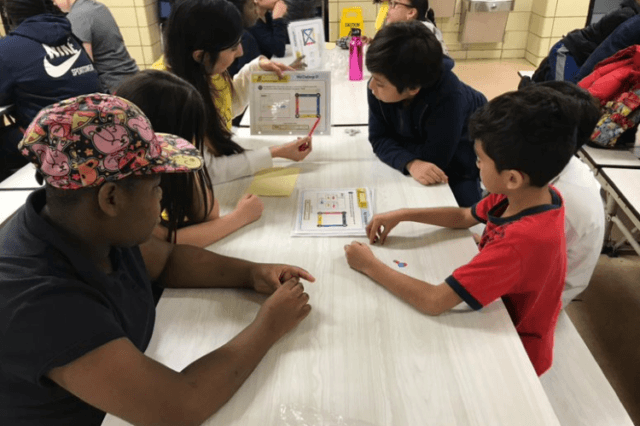 Across the country, City Year partners with educators and corporate sponsors to expose more students to the excitement and challenge of computer programming in schools year-round.

Through a shared belief in the importance of building digital skills, City Year is partnering with BNY Mellon, Comcast NBCUniversal and Microsoft to help expand participation in Hour of Code across our network. Together, we are providing accessible and engaging activities for children that can ignite a lasting interest in computer science and help build critical 21st-century skills.

In collaboration with Comcast NBCUniversal, we are helping to create new possibilities for our students by expanding access to digital experiences throughout the school year. During Hour of Code, several fourth-graders were quick to share with their classmates each time they completed coding a new level in “The Grinch” Hour of Code game, giving each other high-fives. City Year AmeriCorps members and Comcast NBCUniversal volunteers were on hand to answer any questions and provide help as the students navigated the coding exercise.

“I didn’t realize that this is what coding is!” said one girl. “It’s so cool how we can make actual video games.”

A National Sponsor of Hour of Code, BNY Mellon is supporting City Year’s expanded efforts to bring computer science and coding experiences to City Year supported schools across the country, including multiple events later in the year with their other sponsored teams in Boston, Orlando and San José.

Another 25 students from the Microsoft-sponsored team of City Year AmeriCorps members serving at a Junior High School in Brooklyn got a chance to develop their own Minecraft game at Microsoft’s flagship store. “The kids loved it and were all really engaged,” City Year AmeriCorps member Perry Callahan said after the Microsoft event. “I think everyone is already itching to go back and the kids in our robotics club are all excited to learn more about coding.”

Learn more about City Year’s impact in communities throughout the country.

Since 2015, Microsoft has supported City Year in helping to expand access to high-quality and engaging computer science programs that have reached more than 15,000 students in markets across the country.

Many more coding and computer science activities are planned at City Year partner schools across the country in 2019, thanks to the commitment of BNY Mellon, Comcast NBCUniversal and Microsoft, companies that understand we all benefit when students have the skills and resources they need to develop their unique talents and thrive.

As students in the Bronx wrapped up their Hour of Code game in January, they were buzzing with excitement. “That was fun!” one student said. Another asked, “Can we do this again?” City Year and its partners want to make sure that the answer to the question is, “Yes!”