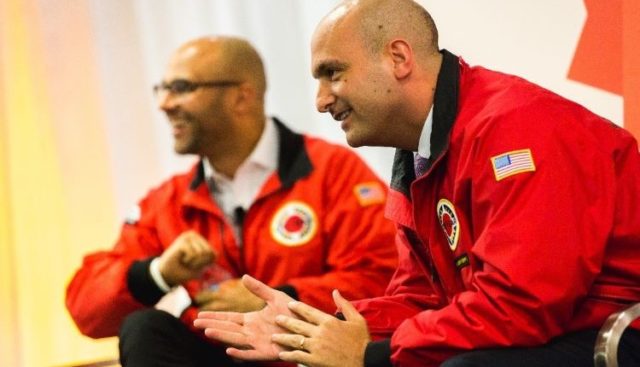 Dr. Nikolai Vitti became superintendent of schools in Detroit, Michigan in May 2017 with a mandate to dramatically improve one of the most challenged public education systems in the country. Dr. Vitti, who prior to moving to Detroit led public schools in Jacksonville, Florida, has an Ed.D in urban superintendency from the Harvard Graduate School of Education and sees access to an equitable education as a key social justice issue in America.

Nikolai Vitti has an ambitious vision for student success in Detroit Public Schools Community District, a place he considers home.

“I think every child is gifted and talented,” he says. “It’s a responsibility of the school system to actualize that talent and those gifts so that students are leaving their educational experience empowered to be successful in college or in the world of work.”

Dr. Vitti, 42, grew up in the Detroit area, and as for serving as superintendent of the 50,000-student district, “there is no place I’d rather be,’ he says.

He knows firsthand that many of his students face challenges outside of their control that make it difficult for them to show up for school every day, ready to learn. These challenges can include family issues as well as economic and political problems at the city and state level that have stripped resources and opportunities from local schools and communities.

“My father left when I was young, and English was not always the first language in my home,” Dr. Vitti says. “I was dyslexic and school was a struggle for me academically. Socially, I was awkward for many reasons.”

“I understood the need for a City Year before I even knew that City Year existed.”

Two things made the difference for Dr. Vitti–a network of caring adults and a love of sports. Now he is on a mission to make sure that every Detroit student has a team of teachers and mentors who support them.

“It wasn’t until high school that a teacher said, “Nikolai, do you know how smart you are?” recalls Dr. Vitti. “I just started to wake up intellectually. I went to college on a football scholarship, but that’s where I fell in love with books and college and education. I had some professors who believed in me and worked with me.”

He first encountered City Year when he worked in Miami as a principal and later as a chief academic officer, among other roles in the district. He continued to collaborate with City Year in Jacksonville where he served as superintendent of Duval County Public Schools from 2013 to 2017.

“I understood the need for a City Year before I even knew that City Year existed,” Dr. Vitti says. “Looking back at my own life, I realize how fragile in many ways it was, but how, at key moments, adults stepped up to fill gaps and allowed me to build relationships of trust.”

As an educator, Dr. Vitti wants his students to forge positive identities, make meaning of what they are learning, feel empowered to set and achieve goals, and form durable skills that will serve them in future endeavors, like college and career. Caring, consistent connections with adults are crucial to these outcomes.

“It’s those mentoring relationships, like the ones nurtured by City Year, that allow for real connections to be made,” he says. “Once that relationship is established, then you can get into the academic work.”

In May 2017, Dr. Vitti became superintendent of Detroit Public Schools Community District, where most students are of color and are eligible for free lunch. He says that City Year is a key part of his vision to rebuild the city’s schools and give all students opportunities to succeed.

“In Detroit, we’re just getting started,” Dr. Vitti says. “I want to see a City Year team in every school in Detroit. Children deserve the opportunity to excel and we are seeing that acceleration move more rapidly in schools with City Year.”

Originally published in the 2018 Annual Report.

Join Dr. Vitti in realizing his vision to help students across Detroit realize their full potential by applying to serve with City Year Detroit.

City Year Detroit is thrilled to welcome Roz Blanck, a long-time volunteer in the community, as the newest...

Before the pandemic, City Year was all about connection. We talked to Kristen Szalontai, operations coordinator, and City Year...

Every year our City Year Detroit staff chooses a focus area that we can come together and rally around to...

City Year Education Pathways: University of Michigan School of Medicine   It is no secret that medical school is competitive. In...