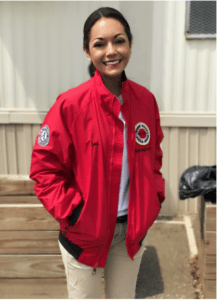 Lee Ann Rice is currently a Social Worker at Ochner LSU Health Shreveport Hospital. In this role, she collaborates with her team in the adult Psychiatric Crisis Unit to safely discharge patients with psychiatric illness or substance use disorders through clinical assessment, outpatient/inpatient referrals, and accurate hospital documentation.

What year did you graduate from the Corps?

I graduated from City Year, DC, in 2017. I enjoyed my experience, where I served at Leckie Education Campus in a 3rd-grade classroom. During my Corps year, I was also a Program Director for Camp City Year. From my experience, what you put in is what you get out of City Year.

Where did you go to college?

I studied at Cornell University, where I majored in Art History and Education. After City Year, I went back to school. I received my Master’s in Social Work at New York University. I recently graduated as of May 2020.

What career did you pursue after City Year?

I just started my real field job, working at Ochsner LSU Health Shreveport Hospital as a Social Worker in Louisiana. Before that, I was interning at NYU Langone Hospital, at the Brooklyn location as a Clinical Social Worker.

How did you find out about City Year?

I found out about City Year through my Kappa Kappa Gamma sorority sister at Cornell University. She was a senior in college at the time, while I was a junior. I honestly thought City Year was for people who wanted to explore the medical field but later found out that I was wrong. I became interested in joining City Year because it would allow me to further my education career path.

What skills or lessons did you take away from your City Year experience?

As cliché as it sounds, I learned a lot about time management. City Year outlines the tasks for you as well as assigns due dates. Ultimately it was up to you to decide how to organize your priorities. It helped me learn to manage and use my time wisely. It also helped me to develop my unique working style. Another skill I learned was teamwork. I did not have any “real” experience working on a team until City Year.

How has your City Year experience helped you within your current role?

All the skills I learned at City Year were transferrable. I learned how to problem solve because we must know how to help and support our patients. I learned the importance of teamwork and delegation of roles. Working at a hospital, I am working with different people regularly. For

example, people on my team, my patients, and holding family meetings. At City Year, you also work with many different people; I learned the ability to adapt.

In what ways are you still involved with City Year?

I am not currently involved with City Year at this time, having just relocated from NYC to Louisiana. However, I ran the 2019 TCS New York City Marathon on behalf of City Year! Additionally, I served on City Year New York’s Alumni Board from 2018-2019. It was an excellent opportunity to interact with the current Corps at the events we hosted and network with fellow City Year alums who served in different cities.

Would you recommend others to serve with City Year?

I would recommend someone to do City Year because it is an incredible learning experience. I believe the experience allows you to learn from students, peers, and different communities and gives you the opportunity to learn about yourself. I would encourage future Corps members to go into their service year open-minded and willing to step out of their comfort zone.

Life After City Year: From Graduation to Occupations

During City Year, AmeriCorps members are encouraged to form a Life After City Year (LACY) plan, an integral part of...

For nearly 20  years, City Year AmeriCorps members have had the opportunity to serve in this important and distinctive city.

There’s lots to love about living in the Nation’s Capital. You’ll have access to world-class museums, colleges and universities and...

"I do believe that AAPIs have an important role to play in the field of public education." - Ji Soo...