Our executive director, staff, alumni, board members and partners are committed to building a stronger Columbia by supporting and developing our AmeriCorps members as leaders in their schools and community. 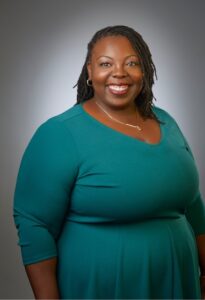 Tanika Epps has served as a youth advocate for more than 15 years. She began her career serving youth in her community as an AmeriCorps Member with City Year Columbia. The experience gained at City Year completely changed her mind set and career path. Her passion for educating children and youth grew even stronger, and she was determined to make a difference in the lives of youth in her community. After completing her service year with City Year, Tanika went on to work at John P. Thomas Elementary School as a Computer Lab Manager overseeing the Success Maker Program. She later went on to work at Boys & Girls Clubs of the Midlands in dual roles as an Area Director and Director of Curriculum Development.

In 2018 Tanika joined Communities In Schools of the Midlands, serving as the Program Director and later as the CEO. Faced with many unprecedented events in her first year as CEO, she continued to preserve, showing her true strength and resilience, notably strengthening partnerships with school districts, state agencies, and local municipalities during the pandemic. She later served as the Midlands Regional Vice President for Communities In Schools of South Carolina, where she continued to advocate and be a voice for children and families in the Midlands.

Growing up in the small community of Lake City, SC, Tanika is no stranger to adversity as she experienced her own personal struggles during her adolescent years. However, her determination from an early age led her to accomplish significant milestones, including graduating early from Lake City High School. This was a huge feat in of itself, as many believed she would never make it to graduation. She went on to earn a Bachelor of Arts in Music from Columbia College, a Master of Business Administration from the University of Phoenix – Columbia Campus, and is currently a Doctoral Candidate for Business Administration at Johnson & Wales University.

In uncertain times, she remembers her parents’ words, the late Pastor James, Sr., and Karen Epps, encouraging her never to give up or let anyone stop her from achieving her goals. Because of the values instilled in her as a child, she developed the mindset that when someone told her no, she was determined to turn it into a YES. This model still follows her today.

Read more about Meet our Staff | Columbia
Board | Columbia

Our alumni board is dedicated to civic leadership and advancing City Year Columbia's work in our community.

City Year depends on committed public and private sector partners in Columbia to support our work.