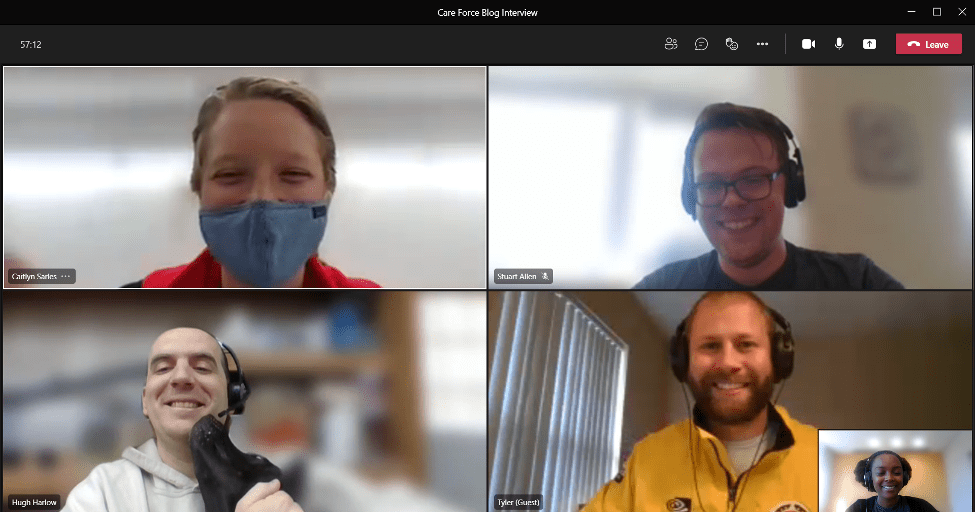 On October 13, 2021, the blog team (Allison Anderson, Caitlyn Sarles and Stuart Allen) and Care Force Events and Service Innovation Director, Hugh Harlow, had the opportunity to speak with Tyler Orginski, who served with City Year San Jose in 2011- 2012 and Team Care Force in 2012-2013. After his years of service, Tyler worked on City Year’s staff for five years, first as a Facilities Coordinator and later as a Care Force Program and Project Manager. Tyler currently serves as the Senior Corporate Partnerships Manager at Venture for America. VFA is a nonprofit organization that creates economic opportunity in American cities by mobilizing the next generation of entrepreneurs and equipping them with the skills and resources they need to create jobs.

Caitlyn: Could you tell us where you served during your first corps year and share some highlights you can remember?

Tyler: I served in City Year San Jose from 2011 to 2012. My Favorite memory by far is meeting my wife. We both served as corps members at AJ Dorsa Elementary in East Side San Jose, which is where we met. We have now been together for 10 years and have a beautiful 2 1/2 year old son, so I think that’s it. It’s not a single memory but it’s easily the best part of doing City Year. Another good memory was finding out about Care Force when they had a project with NVIDIA. That was their largest project of the year. I think 2000-2500 (Fact Check: it was closer to 1500) volunteers or something like that and they needed some extra bodies, so they tapped City Year San Jose. I was able to be part of the prep team for a week and that’s when I said “Wow, I can do good work at City Year even when I’m not working with kids in a classroom. This is perfect.”

Stuart: You alluded to this already, but what motivated you to stay with City Year and join Care Force specifically?

Tyler: I loved the people I worked with. I loved my team. I loved the mission, and just the energy of it: the positivity and everything about it was awesome for me. That’s infectious, and I felt that working at a summer camp and then also working at City Year. At the same time, I learned quickly that I didn’t want to work in the classroom. So, I saw this as an opportunity for me to continue to be part of the organization and support its mission but do it in a different capacity through physically changing the space in which our students learn and helping support City Year financially.

Stuart: Did your Care Force experience align with your expectations going in?

Tyler: It exceeded them. I loved Care Force; if I could make my staff salary, I would have been a Senior AmeriCorps Member for five years.

Allison: What was your favorite event or activity while serving on Team Care Force?

Tyler: It’s funny, I think my favorite memory was when we were working at a boys and girls center in Charlotte. It was the first time we were using a schematic for these bleachers, which were built out of pressure-treated four by fours, which are very heavy. So, we build these, I think three sets of them, and after we finished them we realized they weigh 1400 pounds. Most of the volunteers had left at this point and the Care Force team alone wasn’t enough to lift them. We had to go to the football field and literally grab the biggest dads we could possibly find and we were all stacked around this thing, shoulder to shoulder. It was super hard to carry, but it was a cool thing to come together with the parents that were there that helped us move these bleachers, and then seeing them sit on it afterwards. It’s always tough for me to pick a favorite event, but that was a pretty fun memory afterward to talk about.

Hugh: After that is when we added the weight to all of the schematics, because at that point we had not thought of that before! There had been times before where we had built things that were heavy, but I realized “Oh that has 18 4’x4’s and its hard for me to carry two 4’x4’s”!

Caitlyn: What was the biggest challenge or surprise that you faced on Care Force? I know you mentioned that it exceeded a lot of your expectations but would love to hear if there was any part that was challenging, and how you overcame or grew from that.

Tyler: The toughest part for me and my team was juggling all the personalities of the project managers, and not only their personalities but their different leadership styles and the different ways they run their events. It can be tough because you’ll go to one event with Hugh and another event with another PM and it’ll be a bit different. You’re get a sense of how an event is supposed to be run and what you’re supposed to be doing and what your expectations are, and then you’ll go to another event and it can change. That can sometimes be a little bit frustrating learning how to do something a certain way and then working with someone else and doing it a different way. It comes down to just being flexible and realizing that people have different leadership styles, so you have to go with the flow.

Caitlyn: Did you find any best practices for navigating these different events? Was your strategy to learn each staff member’s different preferences?

Tyler: I think it’s just one accepting it and realizing it and staying flexible. But also, learning different PM’s or project managers tendencies. And you know what they’re going to be sticklers on or what they’re a little more relaxed on. For example, you know that Hugh is going to always wake you up at 5:30 before the event day to take you to breakfast-little things like that. Learning their tendencies and their leadership styles was an important part of success as we got down the road of experiencing events with different project managers.

Caitlyn: You came back as a staff for Care Force, right?

Allison: What position are you in now?

Tyler: After I left City Year, I got hired at Temple University, and did event planning there and alumni relations there. Then I quit my job when my son was born and was a stay-at-home Dad for 16 months. So, when I went to go re-enter the workforce I kind of had an epiphany of “maybe event planning and fundraising face to face isn’t the most sustainable things for me in the midst of a pandemic”.

Today I work for a small non-profit called Venture for America. Essentially, it’s like an on ramp to entrepreneurship for recent grads. It was started by Andrew Yang about 10 years ago. The idea behind it was that there’s no school or training to become an entrepreneur, so we take recent grads who are interested in entrepreneurship and we have a network of startup companies across the country. We connect those recent grads to those startups so they can learn what it’s like to be an entrepreneur and figure out if they want to start a business of their own. My official title is partnerships manager – I work with our companies – but what I do more so day to day is data and operations. I’m the data analyst for all of VFA essentially.

Caitlyn: You’ve touched on event planning, but could you elaborate on some of the other skills you used on Care Force or skills that have been relevant in building your career?

Tyler: Yeah, being flexible and being accommodating. Working well in ambiguity has been a huge thing for me; on events you don’t know exactly what’s going to happen and you have to think on your feet. Every prep day is different, every event is different, and every project you lead as a project coordinator is different. It allows you to use different parts of your brain and challenge yourself to think of new solutions to problems on the spot. And not just that, but also having to deal with people while you’re solving these issues and volunteers. While you’re solving these issues you might have 12 volunteers you have to lead who looking to you. Being able to juggle all of that helped me to improve my interpersonal communication skills, so that I was able to work with lots of volunteers, City Year sites, CSR teams, or C suite individuals well. This really honed my interpersonal communication skills which I think worked out well for me when I went to [Temple University] into more of a fundraising forward facing role. There are so many elements of Care Force I took with me to become a good fundraiser as I move through my career. Also, understanding what it means to be on a team to the next level. Being able to truly understand what teamwork means on a professional level was something I really took away.

Stuart: What’s one thing you wish you knew about Care Force going in, and if you could offer one insight or piece of advice to people who are interested in applying, what would it be?

Tyler: Stay flexible, because Care Force is going to challenge you in ways you didn’t know were possible. But at the same time, you’ll become a better person, a better teammate, and a better professional.

They’re not going to make you do something for no reason for the most part, so know that the people leading you have experience and know what they’re doing. If you buy into it, you will be better off in the long run. Just know that you will be challenged in ways you’ve never been challenged before and you’re going to have to think in ways you’ve never thought before. There’s a lot to be had if you absolutely lean into it.