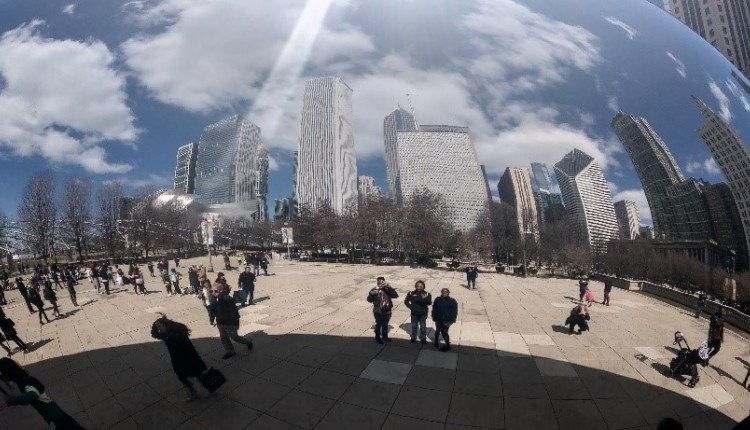 Traveling through airports and on planes for many hours during the week can be hard to keep up with, especially during back to back events. However, I love being able to visit new, different cities while doing meaningful and impactful work. After flying into O’Hare early in the morning, we had some free time to explore downtown Chicago and take photos. I was glad to have my two teammates, Ja’Lon (Jay) Eason and Albertine Samson, there with me to explore; especially Jay since he was showing us around his hometown.

Strolling around Chicago was enjoyable, I especially enjoyed Millennium Park but I was most excited and ready to get to work the next day. Our service partner was La Casa Norte, whose mission is to serve youth and families confronting homelessness. They provide access to stable housing and deliver comprehensive services that act as a catalyst to transform lives and communities. With such a worthy cause, who wouldn’t be excited to do their part? I was beyond fired up to make the event a success.

Our prep week began with Albertine and I sketching images that inspire Chicago pride onto canvas murals that could be hung up in various housing locations. Sketching is one of my favorite things to do during our week of preparation, but often it can be challenging given the complexity of the image. Nevertheless, Albertine and I were up for the challenge. Thankfully we had our friends from the Chicago Civic Engagement (CHICE) Team come out and help with prep. It was a good thing they came out because there was a lot of wood to measure, mark, and cut before the volunteers arrived. Working together like a well-oiled machine, we were able to cut wood for various yard games and two vertical garden box planters. We worked quickly but with extreme caution because handling a chop saw and a circular saw are no joke. Safety first! After sorting and organizing all of the materials that were needed for the service event we were ready. All that was left was to get some much-needed rest to be up bright and early the next day.

Being the runner, the person that is everywhere and anywhere during the event, was interesting because I was able to assist all of the project coordinators that were leading teams of volunteers. However, I was a bit bummed out that I wouldn’t be actively involved with my own team of volunteers. Although I wasn’t assigned to a project I assisted my teammate, Jay Eason, during the beginning of the event. To get his team started, I served as his paint captain while he organized the volunteers and provided direction to get them started constructing and painting the yard games. After all of his volunteers had paint and the proper supplies, I transitioned to assisting other projects.

It was a great event with volunteers who were excited to do service for such a great cause.

I am really thankful for the experience during this event as I learned a lot serving as a runner and generally during my time in Chicago. I especially enjoyed re-learning how to use a circular saw and keep my lines in sight to make a straight cut. As we continue with our service events, I look forward to using this newly polished skill. Though my time in Chicago came to a close, I eagerly await my next adventure in a new city.