You may not have heard a whole lot about Buffalo, New York before seeing that it’s City Year’s newest site.  But there’s a reason that a giant mural exists downtown that says ‘Keep Buffalo a Secret’- this city is a hidden gem whose citizens are incredibly passionate about their hometown.  I’m a Buffalonian transplant who has already fallen more in love with my new city than I can describe. Here are a few of the reasons why I ‘Buffalove’ my new home.

I love exploring historical sites in my free time and Buffalo has a rich background that reaches into nearly every era of American history!  Places like Fort Niagara, which is the oldest building on the Great lakes and was a key military installation for the United States during the War of 1812 let you immerse yourself in the events that occurred here. 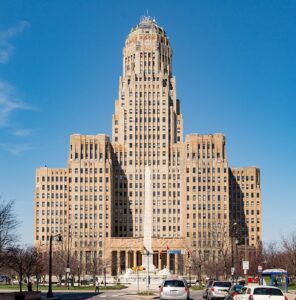 is some of the best preserved in the country, and there are tons of amazing examples of it all over the place!  City Hall is an especially good spot to go to see the geometric decorations and futuristic motifs that make Art Deco architecture what it is.  I totally felt like I was transported back into the early 1930s when I stepped inside- the work that has been done to preserve the building is really impressive and well worth a stop in. 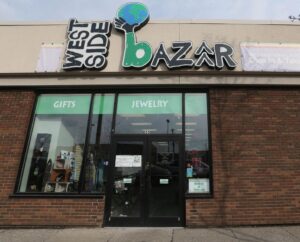 Being able to easily walk wherever I want to go is super important to me- it helps me to feel like I’m really a part of a community!  Buffalo has several really distinct neighborhoods, and most of them are really easy to walk through.  The West Side, Elmwood Village, Allentown, and Downtown are all easily connected and have tons of great shops, restaurants, breweries, and murals to explore.

There is a reason that National Geographic ranked Buffalo as the worlds’ third best food city.  If you’re craving it, Buffalo has it.  Hit up Sato for incredible ramen or sushi, the West Side Bazaar for awesome Ethiopian or Thai food, or Big Mood if you’re craving something plant based!  Obviously you’ll also need to travel along Buffalo’s famous wing trail (I’m not biased but Duff’s definitely has the best wings.  And ok, I’m definitely biased).

Every Sunday is essentially a city wide holiday in Buffalo.  If there’s a Bills game, the world stops.  Restaurants, the Bills stadiums, and hearts are all full.  But loving football isn’t why I put this as my number one reason to love Buffalo- it’s the sense of community that this team helps to create.  I truly understood why Buffalo is referred to as the ‘City of Good Neighbors’ when I attended my first Bills game.  Everyone was sharing their food and the simple joy of rallying together around a city that they love more than anything else. 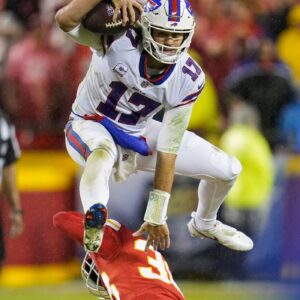 A few years ago, Anthony Bourdain visited Buffalo, absolutely expecting to hate every moment of it.  By the time he ended his stay here, he said, “There is a perverse joy of being alive and living in Buffalo even in the coldest part of winter at night in what I call a blizzard.”  That quote just about sums up what I love so much about Buffalo.  People here find joy in the small things- their cup and char pepperoni, a football team that is definitely going to the super bowl this year, and pretending they don’t hate ridiculous amounts of snow.  Buffalo has everything I’ve been looking for and more, and I hope that you get to visit someday soon!

The School Where We Serve Buffalo Collegiate Charter School (BCCS) was founded in 2018, originally working with grades 4 and...

The School Where We Serve One of our two new Partner Schools in the 2021-2022 School Year is The Charter...

The School Where We Serve Returning for a second year with City Year Buffalo is Persistence Preparatory Academy Charter School...

The School Where We Serve One of our two new Partner Schools in the 2021-2022 School Year is The Charter High...