Take two on service: why my school team leader decided to return for another year of service. 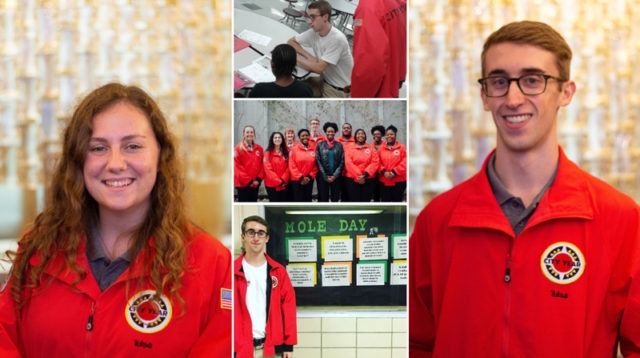 Ryan currently serves as my school’s Team Leader at McLain Junior and Senior High; he served his first year with City Year Tulsa during the 2017-2018 school year, and will be attending the University of Oklahoma’s College of Medicine in the fall of 2019.

This is my first year serving with City Year, so I wanted to know what it was about our work and program that made him want to return and serve another year before returning to school.

Sally: You were born in Ann Arbor, Michigan, and spent much of your life in Edmond, Oklahoma where you attended the College of the Holy Cross. What lead you to want to serve with City Year?

Ryan: I grew up with a parent who is involved in medicine, and science was really my focus in terms of career interest and goals throughout my life. At first, I was interested in engineering, then that changed to architecture, then back to engineering, then finally felt like I wanted to be a doctor.

I went down the pre-med path during college, but sometime along the way, I realized that I didn’t have English credits to apply to medical school. It was like, “Hey I have to wait another year to apply,” so I just started Googling what to do in a gap year before medical school and this list of things started popping up-different stuff like Teach For America, City Year, scribing at a hospital.

I knew that I wanted a break from what I’ll be doing for the rest of my life, and I think City Year is a great opportunity to take that break while also being a professional development opportunity and keeping me in a really trying, demanding job.

Sally: So, you didn’t have any background or experience in education?

Ryan: Not much, no. In college I did participate in this program called SPUD-it stands for Students Promoting Urban Development. Every Sunday we went to this church, and 3-4th graders would meet us there. We spent an hour doing any homework with them and then an hour playing games with them outside.

That was when I realized tutoring is really hard because you have to maintain the interest of the kid you’re working with.  I did not enjoy it at all when I first started, but I knew it was helping the kids get stuff done during the weekend as well as a safe place to play. It was also a great way for me to build patience.

Sally: Coming into City Year, was that a fear for you-thinking about tutoring when maybe you weren’t naturally inclined to do that?

Ryan: I knew I could recall information when I needed to, but I was less confident in finding a way to present the information in different ways that each student might need, especially if they were at a beginner level of understanding. I could always explain something, but it was a matter of finding where the student was at, going to that level and then building from there.

Sally: Did you feel like City Year prepared you for your time in the schools once you were there?

But, there were some things that were really just a trial and error process in terms of getting prepared for, like pull-out tutoring sessions with the students, or, like I said, finding where the students were at. And, also classroom management; you can always be shown a PowerPoint of that but you don’t know how to do that until you do it. That’s a lot of what the job is-just trial and error.

Sally: Was there a moment when you knew that you wanted to return?

Around February, I started thinking about it again. I kind felt that in the back of my mind I decided I wouldn’t serve [another year], but I continued to talk to my TL, my Impact Manager and staff about the opportunity.

Ultimately, I just decided I’m going to have the rest of my life to start a career, but I’ll never be able to come back after finishing medical school and be a TL.

Sally: What are you most passionate about in City Year?

Ryan: I’d say I’ve connected most with the values, particularly “Ubuntu;” that’s something I think about whenever I’m serving. Whatever I do is going to either positively or negatively impact somebody else, and that was really the way I saw my year last year working with 10th graders who are not going to have a City Year in this current year.

I just kept thinking, “What can I do to prepare them for not having my support?” I wanted to be an example and show them how to rely on themselves.

Sally: I know health and a well-balanced life are important to you. How have you been able to maintain that lifestyle while at City Year?

Ryan: That’s a tough question. It just requires a lot of sacrifices in other places I guess. Time management, and honestly, just coming into the day prepared-being able to separate work from after-work.

Sally: What is the biggest challenge in your transition from being a first year to coming back?

Ryan: I think I’m still in that challenge zone. The biggest challenge has been viewing things from the point of view of a TL.

There’s a mentality when you’re a Corps Member that you should kind of just ‘go with the flow’ and do what people tell you to do. When you’re a first year AmeriCorps member, your communication with other people focuses on the facts and details you have and need to do your job.

Sally: What advice, if any, do you have for a corps member who’s considering a Second Year or applying to be a Team Leader?

Ryan: When you’re considering it, really envision what you want it to look like. Know that the only reason you’ll be disappointed is if you didn’t consider how it would be the same or different.

Also, there’s always going to be things about the role that you can’t change, that’s just part of the role, but then there’s always room for the individual to add opportunities for themselves. That was one of the things I had to consider when I was choosing to be a TL: “What is the structure of this job, but also what can I bring to it to help myself in the future?”

Seven cities where you can make a difference to students

Read more about Seven cities where you can make a difference to students
Choosing a life of service: from Peace Corps to City Year

When you've been a part of something greater than yourself it's impossible to return to business as usual. I knew...

Read more about Choosing a life of service: from Peace Corps to City Year
Adventure awaits when you serve in Tulsa

While working on her City Year application, Jessica Butay reached the question: 'Where would you like to apply to serve?'...

My time with City Year Tulsa has and will continue to serve as the foundation for my lifelong mission to...