From Digital To Physical

What does it mean to “do service” in a world no longer bound by ones and zeroes? 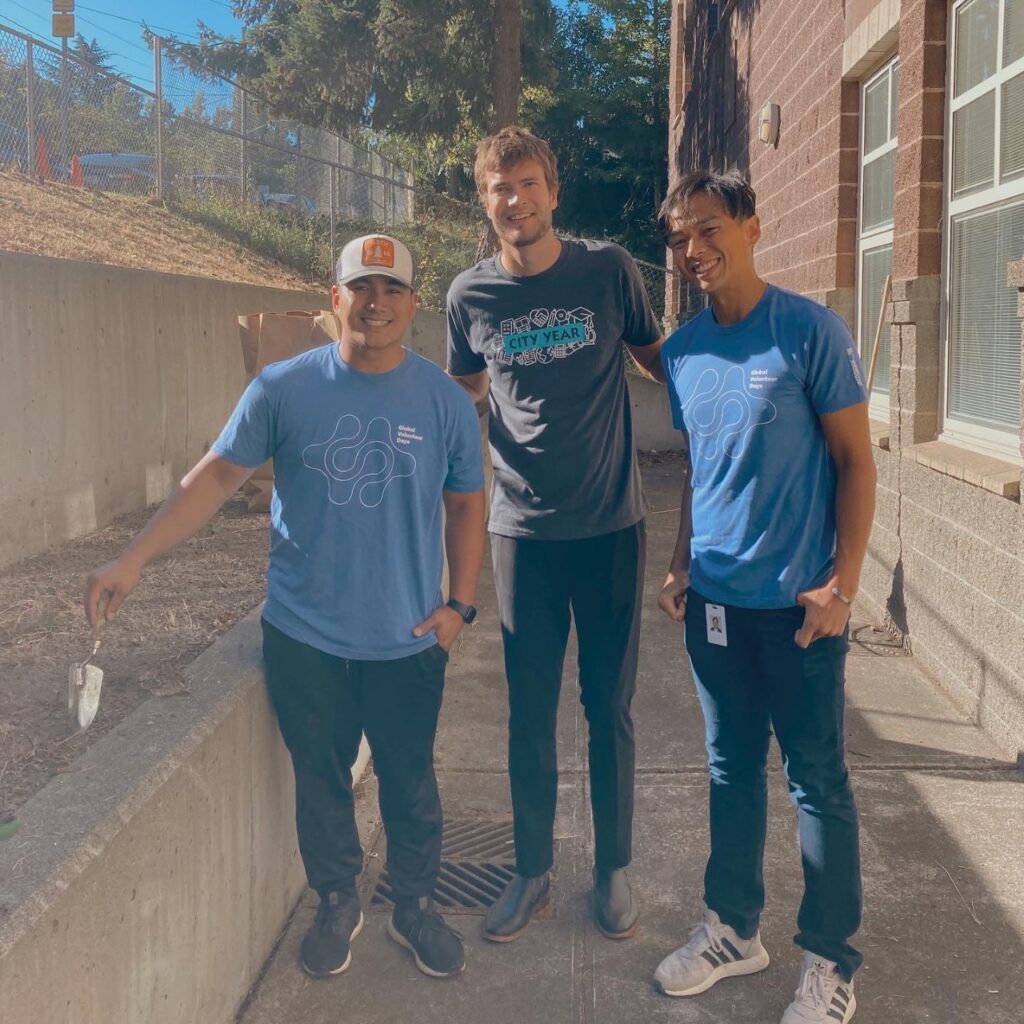 Yesterday morning, the CYSKC Civic Engagement team (myself and Kellen Dempsey – Civic Engagement and Development Manager) launched a joint effort alongside our AmeriCorps members from MLK Elementary School and twenty volunteers from PitchBook Data to prepare Emerson Elementary School’s grounds for the 2022-2023 school year. We had a team collecting garbage, two teams at separate sites around the school doing grounds work pulling blackberries, mulching and weeding, and a team painting recess games and a world map on the blacktop. The volunteers from PitchBook were coming off a three-day weekend thanks to Labor Day, so I came into the project worried about energy levels- When I served in a fifth-grade classroom last year, it was practically verboten to do something high-stakes on the day after a break. I was proven wrong on this assumption about our volunteers from PitchBook almost immediately.

We kicked off the project by putting up the City Year tent (with help from PitchBook folks) and holding the traditional City Year “first circle.” Since it was my first project hosting an external group of volunteers, I felt awkward at first, but it was clear by the time people broke off into their respective project groups that these people were here to put in work, not to judge my oration skills or stare at clouds (both of which, I should mention, are perfectly valid activities to engage with). Following the first circle and some donuts and coffee, the volunteers quickly settled into their teams and set to work.

What has service looked like these past few years?

I, like most other AmeriCorps members, often reflect on what it means to do service at all. For the past few years, the way people show up in community has been different due to the pandemic, and so the meaning of service has become eminently polymorphic; whenever we sit down and start any project, we must ask the obligatory question “Will this be online, in person, or hybrid?” Last year, between online trainings, a stint of Covid-19 and the growing pains of a school that was newly reopened to in-person learning, I had grown suspicious of the methodologies of this new era. I saw the shift towards thinking virtually as a necessary inefficiency born from the circumstances of the pandemic, helpful during times where no other mode of working is possible, but ultimately less efficient than the traditional way we used to do work or service.

It feels still like we’re regaining our sea legs, but this service project fills me with a hopeful curiosity about how future projects will unfold. The painting at Emerson was initially supposed to involve a world map on the blacktop and two four square courts full of color. The volunteers from PitchBook completed those with over an hour to spare, so they migrated to the raised patio with decayed playground games we couldn’t even make out. After consulting with kindergarten teachers about what would be best to paint, the criteria were given to paint something that teaches both letters and shapes. After just five minutes of brainstorming, the volunteers started on a humongous caterpillar with 26 segments, each one to display a letter of the alphabet. 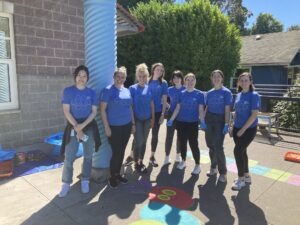 I completed my line-painting project just in time to see the hungry little caterpillar be completed. It struck me that while we’re only just now getting back into the community and performing physical acts of service, the skills and adaptability from serving and working virtually are themselves transcribable to the third dimension. The way the PitchBook team so quickly came up with a design and began implementing it reminded me of the ways virtual service required us to communicate and respond to events with an eye for graphic design and nonverbal media. Being online required a paradigm shift that, for teaching, involved a heavier focus on designing graphics. After we returned to the classroom, I discovered niches where the skills from online transferred to the classroom space, but I pigeonholed that as being part of my classroom skills bucket rather than skills that have now seen more practice across industries during the pandemic.

Without seeing it so clearly in person, however, I might have never noticed how patterns from digital service can be leveraged in the way we transform physical spaces for our students. Ultimately there are a lot of things still left to digest from the Emerson Elementary project. We owe a big thanks to our partners at SPS, Colleen and Thabisa, and the creative, passionate and hardworking folks from PitchBook. I’m looking forward to Octobers’ projects and working towards a cohesive understanding of both where I fit into the greater mission of City Year, and what service means to me. 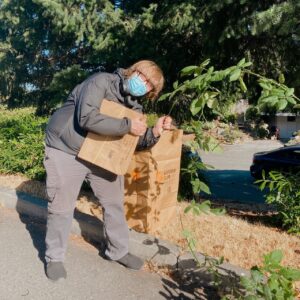 Tarra Mitchell joined City Year Seattle/King County as our new Executive Director this week. Learn more about her own educational...

If Alex is behind in class, he asks to come work in the City Year in-school office during lunch. He...

Read more about Visto y escuchado
Getting to the green

As an AmeriCorps member, my success in supporting our students academically and behaviorally rests in my ability to establish a...