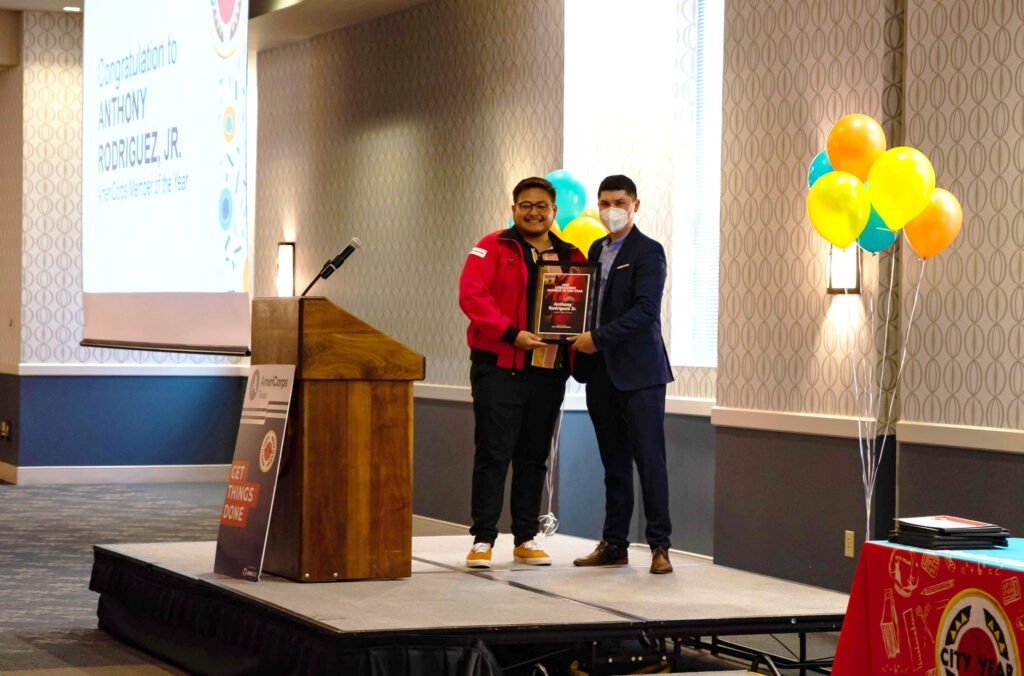 Every City Year AmeriCorps member (ACM) is a tremendous asset to our team, and each year at graduation, City Year selects one exceptional AmeriCorps member whose service has stood out, and this year that was Anthony Rodriguez Jr. Anthony proudly served as the Team Leader on the Valero Energy Foundation team at Lanier High School.

Two years of service, a lifetime of impact.

Giving two years of service to City Year San Antonio (CYSA) was particularly special to Anthony because he is born and raised on the West side of San Antonio. He is a product of the San Antonio Independent School District (SAISD) and he attended three of CYSA’s partner schools – De Zavala Elementary, Tafolla Middle School, and Sidney Lanier High School. Anthony was an outstanding corps member.

He was promoted to Team Leader two months into the service year due to his leadership skills and tactical knowledge of the community and school. He has served as Team Leader of Lanier for two service years! During that time, Anthony shared his unique perspective on school pandemic recovery as a guest ACM panelist for our Breakfast for Champions event and has also led discussions for the Latinx affinity group.

Anthony says that City Year San Antonio had meant the world to him as he’s been able to come back to my neighborhood and serve the community with the experiences and knowledge he learned when he left San Antonio to go to college. One of his joys from this year was coaching the Lanier Armed Drill Team and going with them to the Nationals Drill Competition at Daytona Beach, Florida. Anthony and the team only had two months of practice and sacrificed their Spring Break to come into school to keep on training for the big competition. The cadets placed 3rd in Armed Exhibition Drill and 5th Overall.

AmeriCorps teams make all the difference.

“Knowing their LACY (Life After City Year) plans due to a successful year of service at Lanier HS. They created numerous events that helped the school and community, such as a clothing drive and Holiday Movie Night. We have several returning for another year of service (3 Team Leaders, 3 Returning ACMs, and 1 moving to Civic Engagement in Boston), 1 going to grad school, and 1 accepting a full-time position at a university in Florida. Their contributions and experiences learned during this service will only help them excel in future endeavors.

He adds that he will miss this year’s team the most; there were so many characters and notable personalities on the team that it felt like perfection. Their excellence was unmatched, and the laughs and memories they created will forever be on his mind.

“Big shout-outs to Alana Marsh and Dustyn Taylor for being the best support and teammates I could ask for. This team’s significance to me is remarkable, and I will forever appreciate them,” he says.

We are extremely proud of the work that Anthony has done for CYSA over the last two years. His hard work, dedication, positive spirit, and bright smile have left a lasting impact on not just his team but all of the corps members and staff.

Anthony is working to finish his master of science in media management at Syracuse University. He hopes to have a career with City Year San Antonio as an Impact Manager.

“I love all CYSA has done for me, so I would love to pay it forward to the next generation of AmeriCorps Members.”

“Everyone can be great because everyone can serve.”  – Martin Luther King Jr.   City Year San Antonio was honored...

At City Year, like many organizations, we live in a world of acronyms. As an alumna, I believe the most...

City Year San Antonio created our Circle of Champions to support our strategic Five-Year Pandemic Recovery plan. Our Champions are...