My first day in my new classroom was both exciting and overwhelming. At the beginning of the year, I found my toughest challenge to be with a student named Sarah (whose name is changed to protect her privacy).

Sarah was a 10th grade geometry student who was fairly new to this school and made sure we knew that she wanted nothing to do with math. Every day, I would walk up to Sarah and attempt to work with her on the daily assignment. Most days, I was met with her putting her head down. It was a lucky day if I got a verbal response. This routine soon became exhausting. It lasted over three months. I felt like I had tried everything to connect with her. Then one day out of the blue, she came into the City Year room with a stack full of missing homework assignments and asked for my help. I didn’t know it then, but this was the day that changed everything.

Sarah started to talk to me about her life. I learned that she transferred to our school because she was fighting a lot at her previous school. This, along with geometry, became the focus for the year. Throughout the second semester, I watched Sarah’s grades grow. I watched her struggle to make the better decision. I watched her learn, lead, resist, fail, and succeed. After awhile, it soon became impossible to see me in the hallways without Sarah by my side. 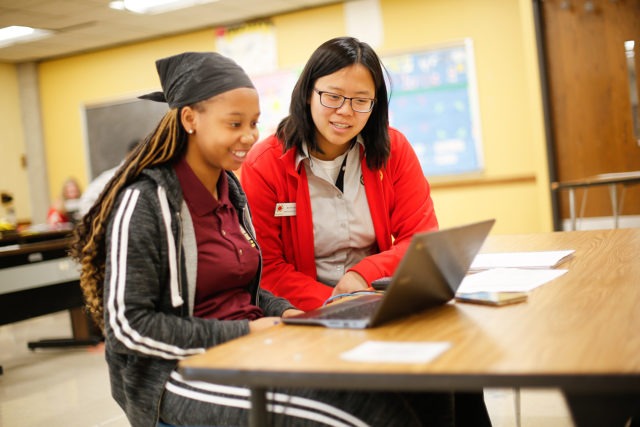 This year, Sarah has not been in a single fight. Her last progress report showed not only passing grades, but A’s. One of our Assistant Principals approached me and personally told me the improvement he has seen in her. She went from having to leave one school to becoming in a leader in her next.

I’m fortunate enough to be serving my second year at the same school I served my first. I get to see my students through one more year of high school and one step closer to graduation. As I walk through the halls or work in the City Year room, I am rarely alone. I am constantly bombarded with phrases like “Miss, I need help in Math!”, “I need to talk to you about my grades”, and “Hi Ms. Mari, can we talk?”. To me, this is the best feeling in the world and ultimately why I decided to serve another year. I don’t know if I will ever get a chance again to be such an integral part of a student’s academic success while also being able to serve as a mentor.

As a Team Leader, I don’t serve primarily in a classroom anymore; instead, I lead a new team of 15 corps members who are in classes themselves. On days where your students walk out of class or fail a test, it’s easy to think that you aren’t making a difference. When I hear this from my corps members, I tell them Sarah’s story. I’m always met with responses of disbelief because of how close we are now. Sarah’s story has been the most personally significant, but she is not an outlier. After serving with City Year for almost two years, I have watched students talk about dropping out to asking about college. I’ve watched shy students join academic clubs and extracurricular activities. Students who I was worried about failing are now preparing for graduation next year. Most importantly, I’ve watched students learn to advocate for both their personal and academic success.

As I was writing this story, I asked Sarah why she came to me for help that day last year. She laughed and said I made it clear I wasn’t giving up on her. She trusted me. Those words were proof enough that my service here has been worth it.

Mari Reyes is a Senior AmeriCorps member serving her second year at Sam Houston High School. After City Year, she will finish her undergraduate degree in Sociology and Urban Studies in hopes of pursuing a career in community development.