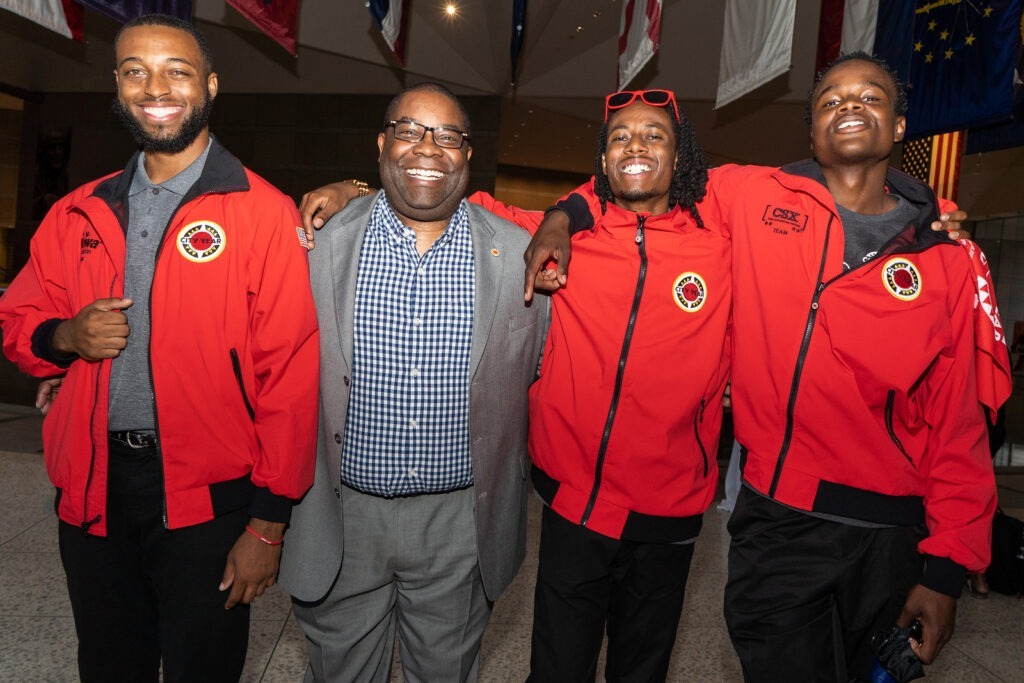 At City Year Philadelphia, we are always amazed at the passion our corps members have for the schools they serve. Another thing which makes us even happier than seeing these inspiring men and women work alongside students is following the lives of those who join us for a second year.

Returning corps members are experienced leaders who bring a special level of excitement and enthusiasm to each and every interaction with their students. To help understand what it means to be a returning AmeriCorps member, we were lucky enough to catch up with Shaquwan Davis-Boone. Shaquwan has an interesting story behind his time at City Year Philadelphia as well as a passion for seeing more men of color in our education system.

A Philadelphia Native, Shaquwan stumbled upon City Year after a conversation with one of his fraternity brothers from college. He spent his first year serving at Warren G. Harding Middle School, which was a plentiful learning experience.

Shaquwan learned a lot during his first service year. A key part of the experience involved a first-hand introduction to systemic inequities within the education system. “After going into schools, I realized all of the disadvantages that kids could have,” Shaquwan shares. This, he says, is especially true for schools predominantly made up of students of color. This can be seen statistically as well. For example, schools with a majority of white students received 23 billion dollars more in funding on the state and local levels than schools with majority students of color in 2016.

As a corps member, Shaquwan’s favorite time of the day is when he gets to power greet students to welcome them to school each day. “You never know what day-to-day lives our kids live through,” he says. “Getting to know students and creating greetings like custom handshakes helps to bring the energy right away and set the tone for the school day ahead. Sometimes all we need is that burst of energy to help get us through the day.”

During his first year at City Year, it was these types of activities, Shaquwan says, that were important to him in making personal connections with students. As a result, he knew his personal mission for being a corps member was not finished, leaving him with the feeling he had to return for another year.

The Importance of Diversity

Part of Shaquwan’s urge to come back has to do with being male. “It is really meaningful to have a male influence inside the school. There is really a lack of male support, I feel, especially towards male students. I just want to be that figure for them.”

Additionally, around 90 percent of students served by City Year Philadelphia are students of color. To this end, Shaquwan’s describes the role of men of color within schools as both powerful and impactful, especially in the time that we are living in where the fight for racial and educational equity is at an historic level.

“In Philadelphia, it’s rare to see men – especially men of color – in the education system at all,” he says. “I hope to not only help students in their education, but in real life situations.”

For instance, in addition to meeting the educational needs of students, Shaquwan says his goal for his second service year is to have more events focused on advice and life lessons such as learning how to tie a necktie, building a resume for a summer job, and more. He believes these lessons are valuable as students transition into their young adulthood.

A self-proclaimed resource for incoming corps members, Shaquwan also has some advice for new and aspiring City Year service members. He advises not to be afraid of getting out of your comfort zone. “Experience discomfort and that will show you your ability to stick it out through anything.” He also highlights the importance of self-care for all new corps members.

“It’s not going to happen in one day,” he cautions. “It takes time and putting the work in, but at the end of the day you’re going to feel very proud of yourself and that you were able to help our students.” That, when all is said and done, is the goal for everyone working at City Year. We are here as a resource for students and to create change in one school at a time.

Each City Year AmeriCorps member has their own story and mission behind their work. Serving together, they create a strong and energetic team to champion students within their schools. If Shaquwan’s story speaks to you, consider becoming a City Year Americorps member. Learn more by visiting City Year Philadelphia online or Apply Today to join the corps.