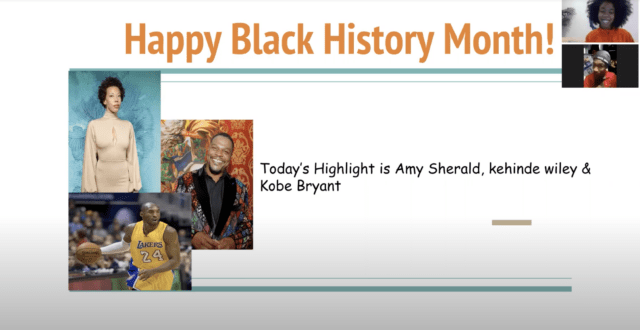 Black History Month is a celebration of Black people around the world. Black history is everyone’s history. This year, City Year Philadelphia celebrated by highlighting programs from our partner schools and AmeriCorps members that are celebrating Black joy and raising up Black voices.

All across the school district, City Year teams and partner schools initiated their own social media series in celebration of Black History Month: both John Welsh and Roosevelt elementary schools posted facts on their City Year Instagram pages, @cypjohnwelsh and @cyp_roosevelt, about important Black figures such as Malcolm X and Nina Simone; Lewis C. Cassidy School hosted a contest on their page, @cy_cassidy, for students to submit poems relating to Black history. In addition, two of our teams and partner schools have taken this a step further by incorporating lessons about Black History Month into their daily classes and meetings.

In celebration of Black History Month, James G. Blaine School incorporated lessons into students’ morning meetings about not only important historic Black individuals, but contemporary figures as well. One meeting highlighted Dr. Rebecca Cole, the second Black female doctor in the America and a Philly native, and Lonnie Johnson, an aerospace engineer who worked on NASA’s Galileo mission to Jupiter and inventor of the Super Soaker—just one of his over 100 patents! Another meeting highlighted Amy Sherald and Kehinde Wiley—the talented artists who were commissioned to paint the official portraits of Michelle and Barack Obama—as well as the late Kobe Bryant, perhaps the most famous player in NBA history. Blaine has also been using Kahoot to quiz students about the lessons, helping them learn more about Black history.

By playing these videos at every morning meeting on Mondays, Wednesdays and Fridays, Deran and his team wanted to not only foster discussion, but also show students at Blaine—the vast majority of whom are Black—that Black history happens every day. “Black history happens every single day at Blaine. The choices you make today are going to be Black history tomorrow,” he said. This is also why, he explained, Blaine held democratic student elections for a class president and vice president for third through eighth grade. “We have kids making speeches about why they want to run for president, what they would do on the first day we were president… It’s all about leadership—the decisions that these students make today create Black history tomorrow.”

“Black history happens every single day at Blaine. The choices you make today are going to be Black history tomorrow.”

As its way of celebrating and remembering Black history, Alexander McClure Elementary School posted videos to its YouTube channel each day of Black History Month. The “Who Am I?” series features AmeriCorps members describing various facts about prominent Black historical figures, before prompting students to guess who they are. Each video features pioneers such as Shirley Chisholm, the first Black congresswoman, or Bessie Coleman, the first Black and Native American woman to hold a pilot’s license. The series also highlights important Civil Rights activists such as Sojourner Truth, athletes like Jesse Owens, and authors like James Baldwin. Ciera Martin, the City Year AmeriCorps Team Leader at McClure, came up with the list of featured individuals for each video in an effort to highlight lesser-known figures whom students might not have known about. You can watch one example below.

Every day, McClure hosts a community meeting before beginning the school day, and these videos have been central to that space this month. Valynda Simmons, the Impact Manager at McClure, said that students and teachers alike have had an overwhelmingly positive response to the videos. In addition, McClure’s afterschool space had a Black History Month showcase every Tuesday and Thursday of February, where students could learn even more about historical figures and engage in fun activities.

“My team has been working extremely hard to get these initiatives off the ground,” Valynda explained. “I am super proud and grateful for their dedication and flexibility. We were able to take feedback and apply it to next month’s ‘Who Am I?’ initiative for Women’s Herstory Month.”

Black history is a vital part of American history, and City Year Philadelphia would like to thank all our students, partner schools, and AmeriCorps members for their hard work, dedication, and celebration during this Black History Month.