The featured panelists were Councilwoman Maria Quiñones-Sánchez, who made history in 2007 as the first Latina elected to Philadelphia City Council and who has committed herself to government reform as well as her progressive “Keep People in Their Homes” agenda; the Honorable Alison Young, the Managing Partner of Red, White and Blue Strategies who previously served as executive director of the Institute for Strategic Leadership at Drexel University’s LeBow College for Business and as a special assistant to President George W. Bush; and Jasmine Sessoms, CEO and Founder of She Can Win, a nonprofit that provides training and funding for women and women of color seeking to run for political office. 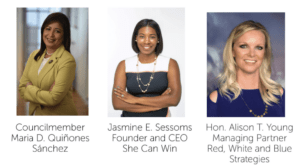 This year’s luncheon was particularly significant in light of Senator Kamala Harris’ nomination as the Democratic vice-presidential candidate, the first woman of color to be selected for a major party’s presidential ticket. This year is also the 100th anniversary of the 19th Amendment, which guaranteed women’s right to vote in the Constitution, and the 55th anniversary of the Voting Rights Act of 1965, the landmark civil rights law that prohibited racial discrimination in voting.

Despite the delay from its originally scheduled March date and the shift to an online setting due to the COVID-19 pandemic, the luncheon went off without a hitch and attendees were still able to engage with panelists and each other.

During the panel, Councilwoman Quiñones-Sánchez, Young, and Sessoms spoke candidly about their experiences as women in leadership roles and the importance of women in civic engagement.

For Councilwoman Quiñones-Sánchez, her introduction to activism and civic engagement showed there were simply “not enough women at the table.”

When asked what role she saw Black women playing in activism and civic engagement, Sessoms explained that Black and Brown women have historically always played major roles. “Black women have been doing the work… they built their own table and brought their friends.”

Asked to describe important lessons learned from the suffragette movement, Young highlighted the importance of continual civic service and interaction with the community. “The number one lesson is that the work is never done, women need to be engaged to see change,” she explained.

City Year Philly would like to extend a humble thanks to Morgan Lewis, Kerri Strike–Stahller, and the rest of our sponsors for their generous donations and support for the 2020 Women’s Leadership Luncheon. If you would like to help City Year Philly continue to strive for its goal of equitable education and empowerment of women in leadership roles, you can donate at our website.