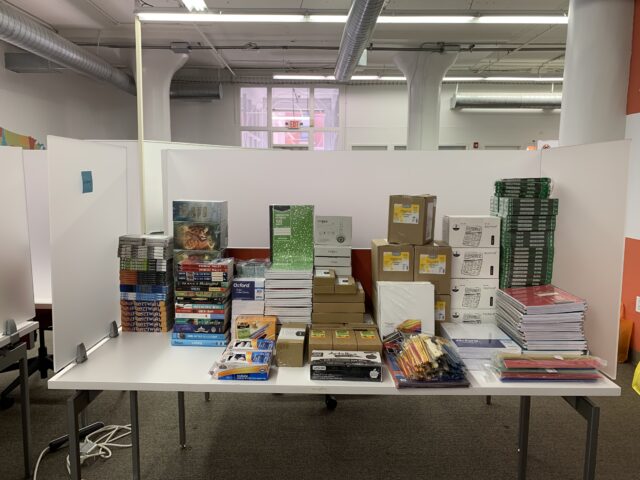 On December 10, 2020, City Year’s Associate Board hosted its second annual Scholastic Showdown via Zoom. Sponsored by American Airlines, the Murray Team, and Chaddsford Winery, 60 members of our young professional community attended the event to take part in an “Are You Smarter Than a Middle Schooler” competition. Participants tested their knowledge in history, geography, English and math, with the winner taking home the grand prize of 80,000 AAdvantage Miles provided by American Airlines. The event raised over $3,000 for City Year Philadelphia!

In December and January, Willis Towers Watson (WTW) held a school supplies drive for two City Year Philly partner schools, James J. Sullivan Elementary School and Warren G. Harding Middle School. WTW has supported Sullivan Elementary school in the past, and this year expanded it to the nearby Harding Middle School. Impact Managers for Sullivan and Harding respectively, Jill Blanchard and Deanna Derry, both worked to create the supply lists for each of their schools. The drive provided many different supplies for the students at both schools, including pens, pencils, paint and paintbrushes, glue sticks, headphones, and notebooks. WTW employees also provided  books for the classrooms, including To Kill a Mockingbird by Harper Lee, James and the Giant Peach by Roald Dahl, Holes by Louis Sachar, and  His Dark Materials series by Philip Pullman. Some of the supplies will be distributed to students now while they are in virtual classes, and others will be given to classroom teachers when they return to in-person class.

January saw the kickoff of our 2021 season of Philadelphia Red Jacket Society (RJS) Events with our virtual wine and cheese. One upside of the pandemic is that we are all now Zoom–capable, and virtual events are possible not just with members in Pennsylvania but around the country as well. The format lent itself well to including our special guest Dr. William Hite, Superintendent of the School District of Philadelphia. Dr. Hite generously gave some of his time, in fact going well over the originally scheduled 15 minutes to engage in spirited conversation with RJS members on a wide range of issues facing the Philadelphia School District. City Year is well known and very appreciated by Dr. Hite, but it was the first time for many RJS members to have the opportunity for small group conversation with him. Included in the discussion were topics such as how the pandemic has impacted the District, the hope that in-school classes may start as early as February, the goal of returning everyone in class by next September, and the importance of creating safe spaces for students to discuss and share their experiences. We’re working on future exciting speakers who will address issues dear to our RJS hearts — education equity and diversity. Stay tuned for upcoming events!