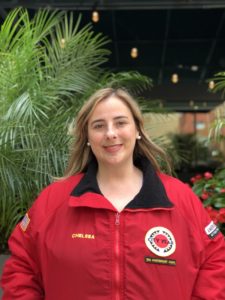 Chelsea Badeau is currently the Senior Director of Editorial Production at Comcast NBCUniversal. In this role, she manages editorial content on Comcast’s customer-facing platforms including MyXfinity.com, Xfinity X1 on Demand, and Xfinity Stream. She’s been at Comcast for 15 years now.

How did you find out about City Year?

My parents have always been very focused on helping people. I come from a unique family; I have 20 adopted siblings and one biological brother. We always did soup kitchens and volunteered at our church. That’s why I was so interested in City Year, because I would have the chance to help.

There was a big convention in Philadelphia, it had to be in 1998 and there was an info table for City Year. I just graduated high school and got accepted into a university, but I still had a feeling that I really did not know what I wanted to do. I was intrigued about the mission and information that I found out about City Year, so I just knew that I had to do it.

What skills or lessons did you take away from your City Year experience?

The skills and experiences that stuck with me most were being open-minded and figuring out ways to make an impact no matter what I’m doing. People don’t look at my job at Comcast and think it was a natural path from City Year, but I think that I stayed on a similar path of City Year. What I learned at City Year is that you can give back to the community no matter what job you’re in.

City Year is also just a great community to be a part of. Even though I finished 20 years ago, if I bump into somebody with a red jacket, we still share a common ground. The City Year community is big.

How has your City Year experience helped you within your current role?

Some of the skills that I learned at City Year are so invaluable. I learned how to be a public speaker, because we had to do a lot of presentations which has carried over to Comcast. I learned project management, in terms of planning, implantation, and assessing the project once it’s over. Every time we would finish something at City Year, we would assess it and review the pluses and minuses. A lot of time in business you’re so quick to move on to the next thing, but learning that so early at City Year made it already established in my mind at Comcast: you need to reflect on what you do in order to make the next project better. At City Year you also work with many types of people and I learned the ability to adapt and work with people who aren’t like me.

In what ways are you still involved with City Year?

I have been lucky to work at Comcast who is a national partner of City Year. Over the years I have been able to stay involved with Comcast Career day with City Year. Almost every year I have been involved someway whether it’s been helping corps members with their resumes, working service projects, or being a mentor to corps members.

Why would you recommend someone do City Year?

I think that a lot of times when you’re between high school and college or just finishing college, you’re not exactly sure about what you want to do for the rest of your life, and it can be daunting. City Year gives you the opportunity to grow as a person and figure out what you want your legacy to be. While you are developing yourself, you’re making an impact at the same time. You learn skills, you receive grant money, and you can meet people who could help propel your future.