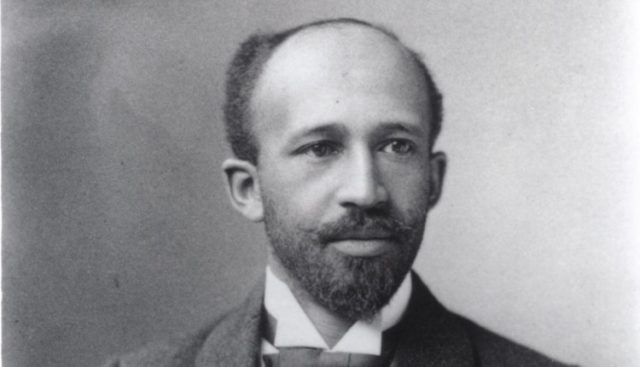 William Edward Burghardt Du Bois was born February 23,1968 in Great Barrington, Massachusetts to Mary Silvina Burghardt Du Bois and Alfred Du Bois. His father died before William was old enough to remember him. At a very young age, Du Bois recalls seeing his mother struggle to make ends meet for the two of them, yet always placing a strong emphasis on education, knowing that it could be the gateway to opportunities and William’s future success. In 1884, Mary Du Bois passed away and William went to work in a local mill.

Despite the passing of both his mother and father, Du Bois continued to excel at Great Barrington High School where he was the only student of color. So much so that after his graduation in 1884, the high schools principal helped arrange a church scholarship for him to attend Fisk University in Nashville, Tennessee. Du Bois describes his first day at Fisk as being a life-changing experience saying, “I was thrilled to be, for the first time, among so many people of my own color or rather of such various and extraordinary colors.”

In 1893, Du Bois declared that he’d finally realized what he wanted to do with his life. “To make a name in science, to make a name in literature, and to raise my race.’
He returned to Harvard and, in 1895, received a Ph.D. in History, making him the first African-American to receive a doctorate degree from the university.

Following this time period, Du Bois continued on to make a name for himself as a scholar, author, teacher, and activist. Noted accomplishments include authoring The Philadelphia Negro, one of the first in-depth studies of the life of African-Americans within an urban community, plus 14 other African-American studies while teaching history and economics at Atlanta University. Also while teaching at Atlanta University, Du Bois published two of his most acclaimed books: Black Reconstruction in America: An Essay Toward a History of the Part Which Black Folk Played in the Attempt to Reconstruct Democracy in America and Dusk of Dawn: An Essay Toward an Autobiography of a Race Concept.

Du Bois was also a fervent activist. In 1905, he founded the Niagara Movement, a group of black professionals whose primary mission was to fight for full equality in every area of life for African-Americans and all other Americans. In 1909, the movement merged with the NAACP. Then, in 1919 Du Bois set out to unite people of color from across the globe by starting the first Pan-African Congress in Paris. He went on to establish congresses in Paris, Brussels, London, Lisbon, and New York City.

W.E.B. Du Bois not only serves as a pioneer in education for being the first African-American to receive a Ph.D. from Harvard University, but as one of the greatest scholars and activists the world has ever seen. Through activism and the research that he conducted, his contributions to the betterment of life for African-Americans can still be seen today.
Sadly, On August 27, 1963, Du Bois passed away. He was 95 years old.

City Year Philadelphia is pleased to honor W.E.B. Du Bois and other prominent figures within Black history — particularly those who have made historic impact in the field of education.
Happy Black History Month.

City Year Philadelphia (CYP) is currently hiring full-time mentors and tutors to serve in schools during the 2022-23 academic year!...

City Year Philadelphia’s annual Red Jacket Gala is coming up next month on Thursday, May 5. We’re looking forward to...