Representation matters: The power of serving your community 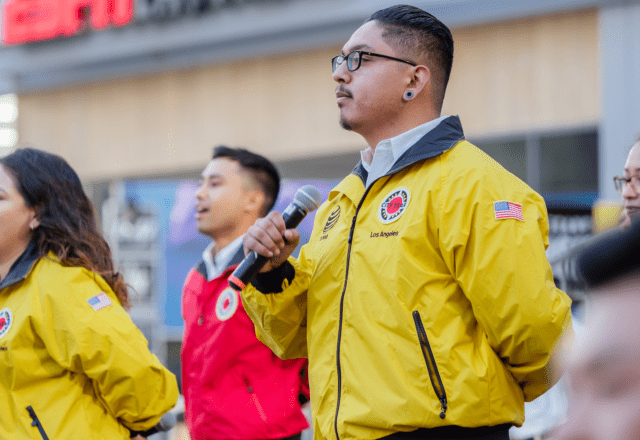 The power of diverse educational representation

Abraham Galán still remembers what it’s like to feel out-of-place in school. Growing up in Los Angeles, Abraham says he lacked confidence in the classroom and often felt like he didn’t fully belong. Though nearly 75% of the students in his school district, Los Angeles Unified, identify as having ethnic heritage from Latin America, nearly all of his teachers were white. Like many kids across the country, he often felt as if the system wasn’t set up for him to succeed.

He knew early on that he wanted to help students like him, in his own community.

Though Abraham wasn’t exactly sure what career he wanted to pursue after he graduated from Whittier College with a bachelor’s degree in psychology, he enjoyed working as an assistant youth basketball and soccer coach at the local YMCA. He wanted to keep working with children and young adults. Abraham understood how important it was for students to have adults in their lives who believe in them, challenge them and support them.

Abraham began his service in fall 2016 at 122nd Street Elementary School in South Los Angeles joining a team of eight other AmeriCorps members.

Like AmeriCorps members across the country, his days started early, as he arrived at school before his students. After greeting and welcoming them into the building, Abraham spent his day in a fourth-grade classroom, supporting students in math and literacy. Abraham thrived the most, however, when it came to supporting his students’ social and emotional needs. Even at their young age, many of his students were dealing with confidence and self-worth issues that manifested in the way they approached their academic work.

Learn what City Year AmeriCorps members do in schools to serve students and their communities each day.

“It might have been easy for me to think, ‘Okay, this student isn’t doing their work because they don’t want to,’ but the reality is that many students shut down because they don’t feel capable,” Abraham says. “I saw that early on and I made a point to help build their confidence—always offering an encouraging word or positive reinforcement.”

Abraham empathized with his students. He knew that in part, their struggle is the byproduct of a flawed system. Often, students’ identities aren’t reflected in the school staff or leadership. And their academic achievement is often judged and based on standardized testing that has an inherent racial bias.

“It’s a symptom of being a part of a wider system that is designed for folks of color to fail,” Abraham says. “I knew that my students were capable, intelligent and hardworking but the messages they received about their test scores made them doubt their abilities. “And while the school had some amazing, caring teachers who were personally invested in the students, the system as a whole seemed to only place value on test scores.”

Abraham worked diligently to ensure that his students knew he cared about them. He chased them down in hallways, encouraging them to go to class. When a student had their head down on a table during a lesson, Abraham made sure to check in with them. And because he is bilingual—fluent in English and Spanish like many of his students—he was often able to connect with them in the language in which they were most comfortable.

Abraham, who identifies as Latino, knew that his presence in the classroom was important. In both of Abraham’s schools, there were a very small number of educators of color and even a smaller number of educators who identified as men of color. Growing up and attending schools in LA, Abraham had always felt the lack of representation and wanted to be someone that his students could see themselves in.

Research shows that students of color graduate from high school and attend college in greater numbers when they have teachers of color, especially during elementary grades. Read the full study.

So, he joined a school-based support group specifically for young Latino men. The group, mostly composed of ninth graders, was led by Abraham and a partner teacher. They met once a month during homeroom and served as an open space for students to vent and discuss the things they were going through. Abraham and his partner teacher would also spend time lending academic support and assisting students with homework assignments.

“It’s incredibly important for students to see themselves reflected in the teaching staff and other adults leading the school community,” Abraham says. “I was able to empathize with my students because I have experienced the world in a very similar way. And the world perceives me the same way it perceives my students. Representation was always a constant theme throughout my time at City Year.”

In addition to helping students thrive, Abraham’s City Year experience also helped him to grow personally and professionally. He came into the program without much “real world” experience, and believed that by serving full-time as an AmeriCorps member, he was gaining the skills necessary to continue working in the youth development field.

Working on a diverse team of corps members from across the country, he was able to gain valuable insight from their perspectives—which was particularly important and enlightening to Abraham having spent his life living and working in Los Angeles County. He learned that even small things like schools with outdoor layouts—common warm-weather states—were virtually non-existent on the East Coast. He also had the opportunity to organize a “carnival” to celebrate social-emotional wins made by the teams’ students. Collaborative planning, delegating tasks and maximizing the talents of his team were all brand new learning experiences for Abraham.

City Year’s 35,000 alumni are flourishing across a wide range of professions, including education, business, government, health and nonprofit sectors. Learn more about our remarkable alums.

“I absolutely loved the work. I was growing so much as an individual because of the experiences I was having with my students, school community and teammates,” Abraham says. “I knew I wanted to come back so that I could continue to work with students and grow in my role as a corps member.”

Returning to national service for a second year

In 2017, Abraham returned for a second year of service, this time as a team leader at Alain Leroy Locke College Preparatory Academy in LA’s Watts neighborhood. Team leaders help to guide and support a team of first-year AmeriCorps members through their year of service. 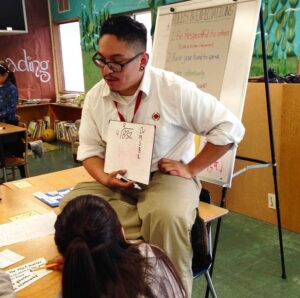 Moving into the high school space, Abraham had to make a big shift in the way that he approached building relationships with students. High school students respond to a different approach and require a different set of emotional and academic support needs than elementary school students. As adolescents, they are navigating complex relationships, supporting their parents and younger siblings at home, or starting to prepare for college admissions, and struggling with the pressures of young adulthood.

“With elementary students, it was much easier to start a relationship because they’re just so excited to be with an adult. But it can be difficult to maintain that strong relationship throughout the year,” Abraham says.

“My experience with high school students was the exact opposite. It’s really difficult to start a relationship with teenagers. Many of them have a wall up. But once you do break down those barriers, it’s generally a very strong relationship built on trust—one that lasts a long time.”

Though he’s no longer working directly with students, Abraham mentors AmeriCorps members who identify as men of color. The mentorship program is called SLAM, or Society for Latino and African-American Men. City Year AmeriCorps members participating in the group are paired with a staff mentor from a similar racial or ethnic background. The mentor helps the corps member navigate the professional landscape and plan for life after City Year. Together, the mentor and mentee cover everything from writing resumes and cover letters to networking and interviewing skills.

In addition to continuing his diversity, belonging, inclusion and equity (DBIE) work, Abraham also enrolled in a master’s program at California State University (CSU) at Dominguez Hills where he is studying to become a school counselor. So far, everything Abraham has learned throughout his studies has been supported by his experiences as City Year AmeriCorps and staff member.

After completing his two-year program at CSU Dominguez Hills, Abraham plans on returning to direct service work with students as a counselor. He’ll take the lessons learned with City Year with him for the rest of his career.

“I know that wherever I go, I’ll be able to draw upon everything I’ve learned during my time here,” says Abraham. “Most importantly, I hope to continue to make an impact on students’ lives by just showing up and showing support.”

Are you ready to make a difference in the classroom? Learn more about applying to become a City Year AmeriCorps member.