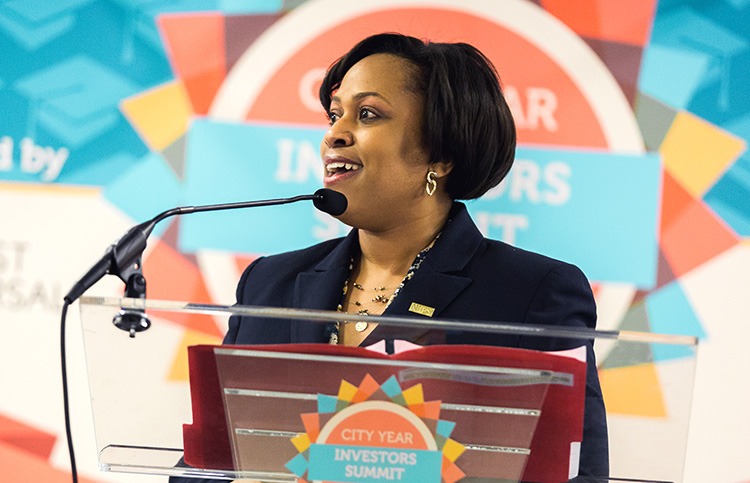 Dr. Darienne Driver has led Wisconsin’s largest school district since she was appointed in 2014 at age 36, making her Milwaukee’s youngest school superintendent and the only woman to hold the position permanently. Dr. Driver, who received an Ed.D. in urban superintendency from the Harvard Graduate School of Education, serves on several boards, including the City Year Milwaukee board.

As a child, Dr. Darienne Driver loved school. She was encouraged by her parents and older sister to excel in her classes and music programs, first in Virginia Beach and later in a suburb outside of Pittsburgh, where her family moved when she was in eighth grade. It wasn’t until Dr. Driver began student teaching in Atlanta that she realized not every student received the opportunities and support she had at school and at home.

“Once I was really exposed to some of the challenges that students in big cities faced, it ignited a different type of passion in terms of how I approached teaching and why I felt it was so necessary to do my life’s work in urban centers,” Dr. Driver says. “Because that is where the need is greatest.”

After graduating from Spellman College, Dr. Driver taught in Detroit Public Schools for several years, and worked as a district administrator in Georgia and Philadelphia before joining Milwaukee Public Schools (MPS). Serving nearly 77,000 students, 87 percent of whom are students of color and 80 percent of whom are economically disadvantaged, MPS is undertaking efforts to significantly improve student achievement and graduation rates under Dr. Driver’s leadership.

Dr. Driver began collaborating with City Year in 2012 when she was MPS’ Chief Innovation Officer. She was impressed with City Year’s “blueprint for impact” approach that identifies and seeks to support high schools with the lowest graduation rates and the elementary and middle schools that feed into them. “We now use City Year’s strategy every time we are identifying new programs to pilot in schools and thinking about how to have the most impact,” she says. “I can honestly say City Year has really helped us think very differently about how we bring innovation and partnership programs to our schools that are most in need.”

Dr. Driver has also been impressed with City Year’s results in boosting student engagement and achievement. In 2017, 92 percent of partner principals in Milwaukee agreed that City Year AmeriCorps members fostered a positive learning environment for students. Dr. Driver holds City Year in such high esteem, she makes time to meet with the entire corps several times a year. “I really appreciate the type of vulnerability and courage it takes for Dr. Driver to hold town halls with our AmeriCorps members,” said Meralis Hood, executive director of City Year Milwaukee.

“She really values the contributions and voices of young adults, and she makes the time to listen with an open heart to what they have to say.” City Year AmeriCorps members bring another essential element to Milwaukee schools, says the superintendent. “It’s no secret that City Year brings joy,” says Dr. Driver.