My City Year experience took me to new heights 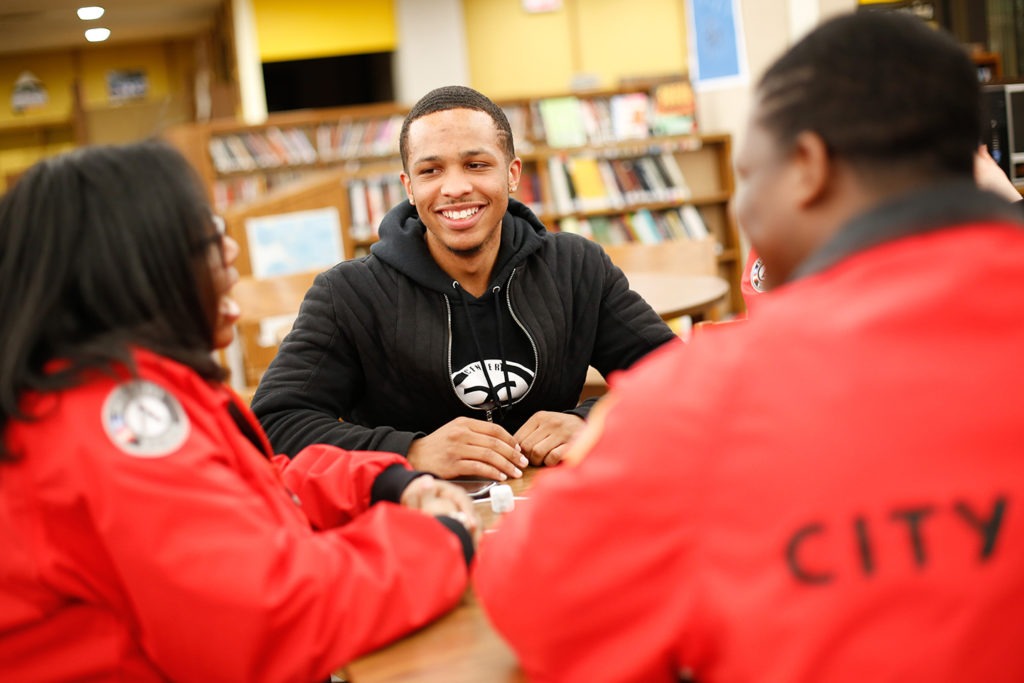 Just as our AmeriCorps members give their all to support our students, our organization and staff strive to give our AmeriCorps members the support they need to thrive and grow during their active service and beyond. As part of their year or two of national service, City Year AmeriCorps members receive professional development training and coaching as they determine their next step —whether that’s spending a second year with City Year or moving on to a variety of career paths.

City Year facilitates professional growth through a sense of civic identity that includes successful relationship development and team collaboration. Terrell Garrett, a City Year Washington, D.C. ’11 alumnus, says he benefited greatly from City Year’s investment in his professional development and personal growth. “City Year was one of the most eye-opening, life-changing experiences I’ve ever had in my life,” Terrell says.

Terrell is now the Director of Teacher Support at OneGoal, a program where high school juniors and seniors receive support with the college application process and throughout their first year of college. Students apply to the program and, if selected, Terrell works with their teachers, helping them to learn how to best support their student during the transition from high school to college. The program’s members are students who typically wouldn’t receive traditional resources in terms of access to scholarship programs or other forms of support,” Terrell says.
I’m helping students to seize opportunities and am opening doors for them, similar to my service in my time at City Year,” Terrell explains, “City Year was an amazing experience that opened my eyes to the world of education and systemic racism.”

During his year as an AmeriCorps member, Tyrell learned that there are innovative ways that mentors and caring adults can help level the playing field for their students.

According to a recent City Year Alumni Survey, 47% of City Year alumni respondents currently work in the education sector, 16% of whom are teaching in classrooms.

Terrell has experienced the power of mentors in his own life. He sees himself as a “byproduct of mentorship programs,” and credits programs like City Year that kept him on a straight path growing up in Philadelphia. “I had the opportunity to do a lot of good, and the opportunity to do a lot of bad,” Terrell says. “For me, being active in afterschool programs, I knew there was something better. I just wasn’t sure how to get there. Having mentors in those programs who were a little older than me to look up to, made me realize I had a lot of potential, and if I didn’t use it for good, I [could] find myself in a bad place.”

Terrell eventually decided to commit to a year of national service with City Year to hone his leadership skills and pay it forward to other kids who grew up in situations similar to his.

At City Year, Washington D.C., Terrell found his calling in the field of education. “I wasn’t sure exactly what I wanted to do in education,” he explains, “but City Year showed me that I wanted to serve individuals who, like myself, would’ve made a left turn and not the right one.”

If it wasn’t for the mentors he had through his afterschool programs, Terrell says there’s a high chance he could have fallen off track and wouldn’t be where he is today.

The value of mentorship and professional growth don’t diminish with age. Bosses, teammates and colleagues can also serve as mentors to young professionals. Terrell looks back on his time with City Year and is especially appreciative of the mentorship from his Impact Manager and other staff.

“Whether that meant teaching me basic email etiquette, giving me public speaking opportunities or really just teaching me how to hone my voice and my leadership skills as a Team Leader,” Terrell says, “those who supported my professional development at City Year showed me a lot about myself that I didn’t know before.”

Editor’s Note: This post was originally published in 2018. It was updated and reposted here in June 2019.
Learn more about service with City Year: