For the past 30 years, City Year alumni have been making a difference in their communities long after the conclusion of their service with City Year. Since 2005, Comcast NBCUniversal has recognized 77 City Year alumni with our highest alumni recognition–the Comcast NBCUniversal Leadership Award. This year’s recipients were announced this week at our Impact Summercharger by David L. Cohen, Senior Executive Vice President and Chief Diversity Officer at Comcast Corporation, and Chair of the City Year Board of Trustees. 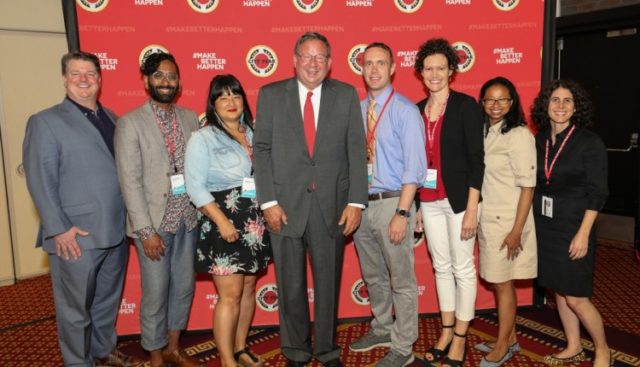 This Year’s Leadership Award Winners Are:

Matt Axelrod (City Year Boston ’88), partner at Linklaters LLP, for decades of public service in the federal government including as a judicial law clerk to two different federal judges, an assistant U.S. attorney in Miami, and principal associate deputy attorney general at the Department of Justice.

Robert Barnett (City Year Seattle ’10), co-founder and chief operating officer of The Modern Classrooms Project, which empowers teachers to leverage technology to create classrooms where all students truly learn, for his service as a classroom teacher and his dedication to advancing educational equity for students.

Imran Siddiquee (City Year San Jose/ Silicon Valley ’08), communications director at MediaJustice and collaborator with the South Asian American Digital Archive in Philadelphia, for their work as a writer, filmmaker and activist challenging limiting representations of race and gender in popular media.

Laura Toni-Holsinger (City Year Boston ’04), executive director of United Way of Harrisonburg and Rockingham County, Virginia, for her commitment to social justice as a leader in the nonprofit sector and her work to build networks of services to increase their collective impact in the community.

City Year helps prepare you for a social work career

Rebecca Charles served as an AmeriCorps member at City Year Philadelphia during the 2018-2019 school year. After her year of...

While working on her City Year application, Jessica Butay reached the question: Where would you like to apply to serve?...

Literacy is the ability to read and write, but what does growing student literacy for elementary, middle or high school...

Learn more about the benefits of service with City Year AmeriCorps, including preparation for a career, exclusive scholarships, the Segal...