Daavi Gazelle, City Year Boston ’16, credits City Year with changing his life—both when he was an elementary school student who benefited from having a City Year AmeriCorps member in his life and when he served as a corps member himself. With a genuine love for kids, Daavi entered college after serving a year with City Year intending to work in education but he ended up making a career pivot into business instead.

Learn more about what Daavi learned during his time in the corps, the benefits of City Year (especially serving right after high school), and how he’s using the skills learned through his service in his exciting current role in the corporate world as a strategy associate at Visa in this conversation with Aisha Folkes, City Year Providence ’14, our National Senior Communications Manager, Alumni Audience. 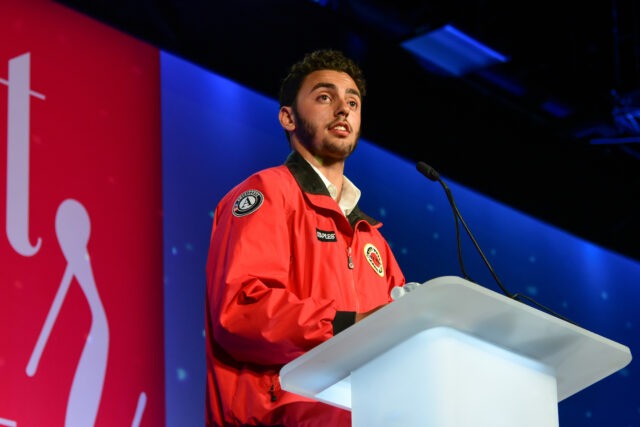 The legacy of City Year service

Aisha Folkes: Rumor has it your connection to City Year started before your year of service?

Daavi Gazelle: As a third grader at Curley K-8 School in Boston, I had a City Year AmeriCorps member named Greer that made a huge impact on my life. So much so, nine years later I joined City Year and served in the same elementary school I attended as a kid. Full circle moment!

I remember Greer fondly. I didn’t have a dad growing up and here was this big, tall, smiley, great guy who encouraged me constantly. It was the little gestures like allowing me to wear his red City Year bomber jacket that made me look up to him. Back then if he told me “jump” I’d say “how high?” I’d love to tell you that I was going down the wrong path and then Greer saved me, but that’s not what happened. Overall, I was a pretty good and well-adjusted kid but it was his presence in my life and him believing in me that truly made me feel seen and special.

City Year’s approach to supporting students is holistic – which means our AmeriCorps members are trained to help students grow academically, socially and emotionally.

During my corps year, City Year flew Greer in for City Year Boston’s Starry Night gala, an event for City Year supporters and donors. We reconnected, I gave a speech, and then he followed. It was a special night. We’ve remained connected since then; it’s been almost a two-decade relationship at this point. Truly a great guy!

AF: I love that! How was your City Year experience?

DG: City Year really changed my life. Not only can I speak to how impactful my experience was and how much I loved it, but it also ended up being a great financial decision for me.

Check out the benefits you are eligible for as a City Year AmeriCorps member, including a bi-weekly stipend, a Segal Education award, access to exclusive scholarships, professional experience and more.

Before serving, while applying to colleges, I was slated to pay about $200 grand for college. After City Year I reapplied, got into a better school, and they gave me a full scholarship. My personal statement focused on my City Year service, and because of that, I was granted the Chancellor’s Scholarship—a full ride. Apparently, it’s given to students who exemplify a deep-seated commitment to diversity, social justice, and impacting the community.

I give credit to City Year for helping me save literally hundreds of thousands of dollars and setting me on this career trajectory.

AF: How would you describe your transition from City Year into college?

DG: When I got to college, I felt ready and more mature compared to a lot of other freshmen. I was locked in, I earned a like a 3.9 GPA in my first year and took on leadership positions on campus early on. I mean, after you spend 50 hours a week in a systemically under-resourced school helping kids learn and grow, for me taking on both the academic and social aspects of college felt easy.

All in all, City Year was a massive return on investment for me from the life lessons I learned, to the scholarship I received, to the Segal Education Award that helped pay for my room and board. It wound up being the best financial decision. 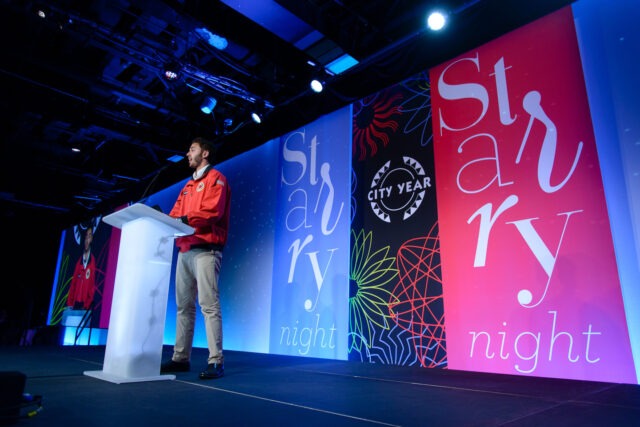 AF: Speaking of career trajectory, I noticed on your LinkedIn profile that you studied human organizational development, applied mathematics, and ed policy. It seemed like you wanted to work in education at first? What changed?

DG: Ha, you should be a detective—great work! I came into Vanderbilt University as an education major, and while Vanderbilt’s Peabody School of Education and Human Development is up there with Harvard and Stanford as the great education programs in this country, I was beginning to be more intrigued by some of my business courses.

City Year alumni go on to serve and lead across a wide range of professions after their year of service, including teaching, business, technology, government and more. Learn more about our inspiring 37,000 alums.

During college I was still focused on kids the entire way by participating in Big Brothers Big Sisters. My first two summers I went back to Boston and taught summer school, and I coached sports. However, I made the decision that while teaching is an amazing profession, it just wasn’t for me and that’s okay. The Human & Organizational and Development courses were right up my alley, so I switched to major in it full time.

How City Year service prepares alums for the corporate world

AF: In your current role, working in strategy at Visa, what exactly do you do?

DG: Ha, I get this question a lot! Essentially, large companies need people to help them decide what the strategy’s going to be. When deciding what markets to try to enter, a company needs to look in the mirror in order to determine what it’s good at, what it’s not, and where it can compete. That’s my role—my team helps Visa take a step back and examine.

DG: Yeah, I like it! It’s fun. Anything from the CEO asking “What should Visa’s mission statement be?” to the Head of Debit asking “What’s the future of tap-to-pay?” Anytime any part of the company wants to think through these big strategic questions, that’s where I come in.

A lot of companies pay consultants for strategy type work. But if you have someone internal working on strategy, that employee understands the business better and can play a role in the strategy from idea to fruition.

DG: Yeah, for sure! The first thing that comes to mind is deference and understanding how to navigate relationships. My relationship with my partner teacher during City Year is similar to my relationship with my boss now. Back then it was so important to know when to jump in and take lead on lessons, but ultimately you’re not in charge of the classroom. Having the emotional intelligence to understand when it’s appropriate to jump in versus when to take a step back is something I developed during my City Year.

Read about what you can expect as a City Year AmeriCorps member.

Also, as cliché as it is, teamwork and dealing with people. In my opinion, you can read as many books about working with other people as you want, but the only way to get better at it is actually working with people. During service, I spent the entire year calling up parents, speaking in different languages to them, and delivering, at times, tough news. While working with the principal, lunchroom staff, my fellow AmeriCorps teammates, teachers, and students, I was getting a crash course in human relationships. This is the stuff that I still use today, everyday, in the workplace. I wouldn’t say I’m an expert by any means, but the more you do it, the better you get.

AF: What would tell someone who is considering serving with City Year after high school as a gap  year, a stepping stone to college or career?

DG: Do it! Serve before moving on with your career! It’s such a good opportunity because you basically get access to a bunch of mentors that are four or five years older. The people that I did City Year with were like older siblings to me. I loved what I did in the classroom, but the biggest impact for me was being a part of that community. It’s not all work either. I made so many friends and had fun in community outside of service.

As an 18-year-old, you bring a lot of strengths to the table. While the near peer model works well with AmeriCorps members in their twenties, it’s also effective to have an 18 or 19- year-old in the classroom. I was good at connecting with students of all ages because I understood their references a lot better.

AF: That’s so true! I remember my City Year service, we sure did have a lot of fun outside of work.

DG: Tons! But don’t get me wrong, I had fun during service too. There’s just so much you can provide a young person in a day, in a second, by being a City Year AmeriCorps member. There’s the students you work close with, and then there’s the kid in afterschool program that didn’t have anyone to talk to and you played Magic the Gathering with him once and it turned his whole month around.

Or the kindergartner who you had a secret handshake with, the teacher you co-taught a lesson with, or the custodian you just talked to. Being a positive part of the school community, you have these infinite little touch points that mean a lot in aggregate. No one’s SAT score will necessarily be higher because you did it, no one’s getting a job because you did it, but it’s these little bursts that together make a school what it is.

Are you thinking about what skills you want to strengthen, how you can finance future study, or ways you can give back to your community? City Year could be the right place for you!