Make a difference and discover a career with AmeriCorps

A short time into her national service in Jacksonville, Florida, City Year AmeriCorps member Holly Franklin saw the wisdom of advice given to her years earlier by a high school administrator—that a career in education might suit her talents.

After finding it easy to connect with seventh graders at the local public school where she serves as a student success coach, the 22-year-old has realized she’d like to manage her own classroom one day—following in the footsteps of many City Year AmeriCorps alums who become teachers.

“I’m a part of making a big difference here,” Holly says. “I’ve realized what I want to aim for in the future.” 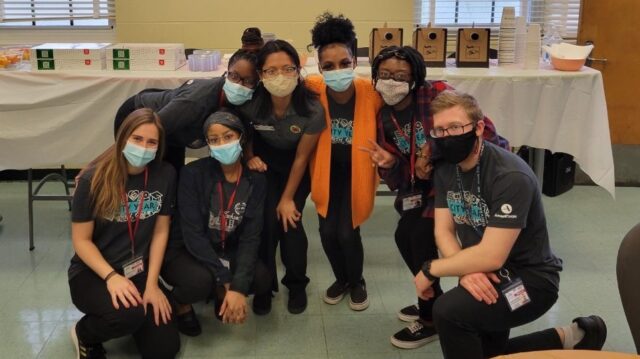 What City Year AmeriCorps members do

AmeriCorps national service programs create a path for young adults to gain professional experience that helps them take the next step in their careers and education. AmeriCorps members like Holly, who is looking to return to college after her service year, earn stipends, benefits and education awards. Nine in 10 of City Year AmeriCorps alums say their experience had a significant positive impact on their lives. More than half of City Year alumni work in education-related jobs—including as teachers, administrators, guidance counselors or employees at education nonprofits—after strengthening their professional skills during their national service experience. City Year recruits young adults to serve in systemically under-resourced schools in 29 U.S. cities.

Holly and her City Year AmeriCorps teammates collaborate with partner teachers to help students catch up and keep up in school and adapt to pandemic-related realities. Through her full-time service, Holly helps make school feel like a place where students belong, can ask for help, and share their point of view with confidence. Both in the classroom and during tutoring sessions, students practice reading and writing with Holly, who also helps them strengthen social and emotional skills, like teamwork, which are important in school and in life. Research shows that the more time students spend with City Year AmeriCorps members, the more likely they are to improve on social, emotional and academic skills and on attendance, with those furthest behind benefitting the most.

City Year supports schools with the help of philanthropic and corporate partners including CSX. The railway freight company sponsors teams of AmeriCorps members like Holly both in its hometown of Jacksonville, Philadelphia and Washington, D. C.—all cities where company employees volunteer to support local schools. This year, their initiatives have included virtual events where employees organize school supplies for students and appreciation kits for teachers.

Since 1995, CSX has helped sponsor more than 3.2 million hours of service by AmeriCorps teams. Along with private sector support, City Year is made possible by public support, including federal funding from AmeriCorps, a network of national service programs. Economists have found that every $1 of federal taxes invested in AmeriCorps and Senior Corps returns over $17 to society, program members and the government.

CSX also has supported students in Jacksonville by donating refurbished laptops that have helped AmeriCorps members like Holly track student progress over the course of the school year as students receive social, emotional and academic support, including in math and English Language Arts.

By intentionally partnering with schools that historically have been under-resourced in terms of both staff and infrastructure, City Year works to address educational inequities that have been magnified during the pandemic. At the red brick Matthew Gilbert Middle School, a short drive from downtown Jacksonville, Holly says her students are smart, eager to learn and that most like to participate in class—though some need encouragement.

“I always say, ‘advocate for yourself’—there’s no such thing as a dumb question,” she says. “The person next to you may be wondering the same thing.”

Holly* collaborates with her partner teacher in the classroom by answering questions from students, and helping them work through a concept step by step when they have trouble. She reinforces classroom lessons during tutoring sessions where students hone their literacy skills. Holly also works with students who have missed school, helping them catch up and keep up with lessons, and stay on track toward earning their high school diploma. When one of her students—who as an athlete is popular with his classmates—had a habit of distracting his friends in the classroom, she talked to him about the importance of being a good leader—and since has seen him become more focused and take pride in that.

Helping students meet their potential, feel valued and encouraged to believe in themselves is one reason Holly says she wants to join the 13% of City Year AmeriCorps members who are classroom teachers. “This is my passion,” she says. “This is what I want to do.”

Learn more about serving with City Year AmeriCorps at an upcoming information session, or apply now: