Voices for National Service is a coalition working to build bipartisan support for national service, develop policies that create more opportunities for Americans to serve, and ensure a robust federal investment in the Corporation for National and Community Service. Hosted by City Year, Voices for National Service is made up of nonprofits, state service commissions, and individual champions of AmeriCorps and Senior Corps. Founded in 2003, this coalition has been tremendously effective in bringing the national service field together to achieve the common goal of expanding service opportunities nationwide.

The Friends of National Service Awards is an annual event that recognizes leaders from the public, private and nonprofit sectors who have contributed in building a culture of citizenship, service and responsibility within America. Honorees are nominated by members of Voices for National Service and selected by a Steering Committee. 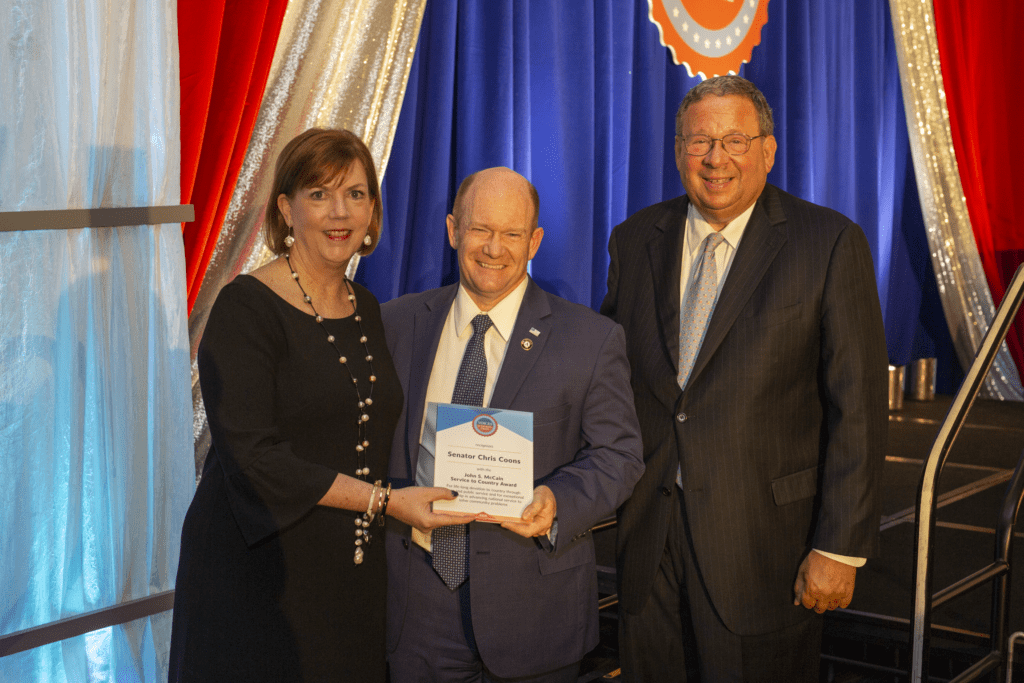 Last week, the national service community came together to celebrate a bipartisan group of elected officials and leaders from the nonprofit and private sector for their commitment to national service.

Kicking off the evening, AnnMaura Connolly, president of Voices for National Service and chief strategy officer of City Year, spoke to a buzzing room about the uniquely bipartisan nature of AmeriCorps and Senior Corps, and kicked off a powerful line up of honorees.

“To our Congressional champions we say thank you, we know you have to make difficult choices and we are grateful that you continue to prioritize funding for AmeriCorps and Senior Corps, she said. “We hope we can count on your leadership and support again this year.”

“It is important to stand shoulder to shoulder and show people with action that you are with them in the efforts to build strong communities,” Rep. Haaland said, as she recalled her childhood growing up in a Native American puelo called Laguna, where people looked out for each other.

“The Pueblo Indians created a community where everyone worked together. If one person didn’t eat, then no one ate,” she said. “Everyone worked so that all could eat. That’s the spirit that I was raised in.”

U.S. Rep. Steve Stivers (R-OH) received the National Service Champion award. “I appreciate what all of you do to make a difference in everybody’s life,” Rep. Stivers said. “We have 900 AmeriCorps volunteers in Ohio that will give more than a million hours of service. That is a giant change for a lot of people’s lives.”

Sen. Chris Coons (D-DE), the recipient of the John S. McCain Service to Country Award, spoke about a shared vision for national service.

“The goal is to create a new expectation of national service so that we would all turn to each other, as we get to know each other as adults and ask, ‘where did you serve?’” Coons said. “We hope to change the expectations of employers so that they say, ‘preferentially, we want to hire people who have done their national service; civilian or military.’

“We want to change the expectations of colleges and universities so that they say, ‘we want young people who have served, are serving or will serve.’ We want to change our national culture to once again embrace the national service ideals which were a key part of our nation and its formation.”

U.S. Sen. Blunt, along with U.S. Rep. Rosa DeLauro (D-CT) were inducted as the inaugural members of the Voices for National Service Hall of Fame for their extraordinary leadership and longtime support for AmeriCorps and Senior Corps.

“Whether its teaching in charter schools, preschools or head start, putting together day care or senior care programs, all of those things are part of what is out there through AmeriCorps and Senior Corps,” said U.S. Sen. Roy Blunt (R-MO). 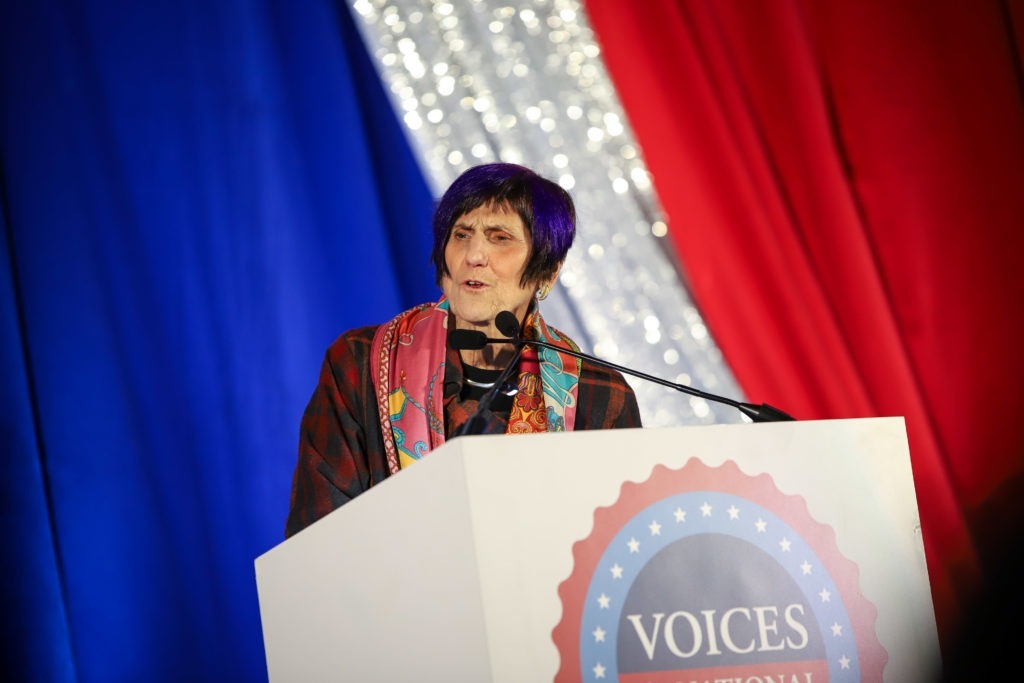 “Since 2003, Voices for National Service has been building strong bipartisan support for national service,” Rep. DeLauro said. “It’s a way in which we build up our nation, our people. You epitomize the values of this great country. With you, it’s not about every man or woman for himself or herself but about our collective responsibility, our moral responsibility for one another. That is what you and your volunteers do every single day.”

Ryan Shelton, one of The Corps Network’s Corps members of the Year, shared his powerful journey of overcoming adversity from the foster care system to the prison system. Ryan spoke about reentering society and finding meaningful purpose and belonging in the company of fellow Conservation Corps members from Long Beach, California. Conservation Corps members are 18-35 years old and are considering a career in land management. They learn practical skills and develop confidence as emerging leaders in the field of conservation during their service terms.

“I applied to Conservation Corps and about two weeks later I had my uniform on, feeling good with the AmeriCorps symbol on my sleeve,” he said. “One thing I noticed when I started working was that it wasn’t just the work, it was the positive community that I had around me that was really changing me.” 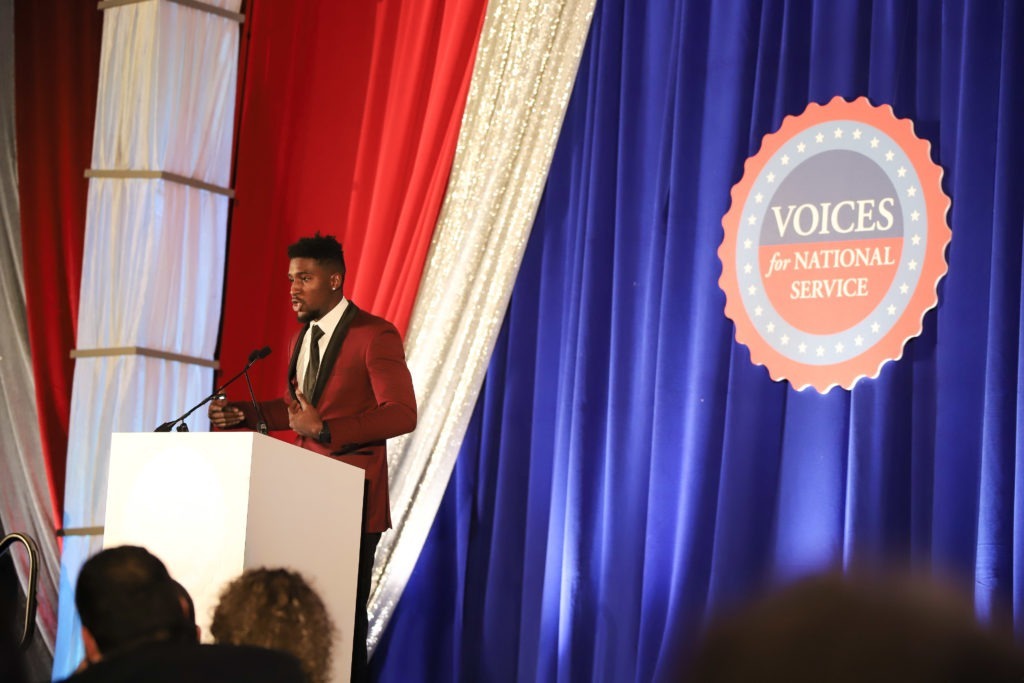 Dorothy Stoneman, founder and former CEO of YouthBuild USA, and Michael Brown, co-founder and former CEO of City Year, presented the National Service Advocate of the Year Award, which was renamed in their honor. The first Stoneman Brown National Service Advocate of the Year award was given to New Hampshire State Rep. Matt Wilhelm, who said it was an honor and a privilege to spend a celebratory day in the company of “pioneering trailblazers and legends in this national service movement.” 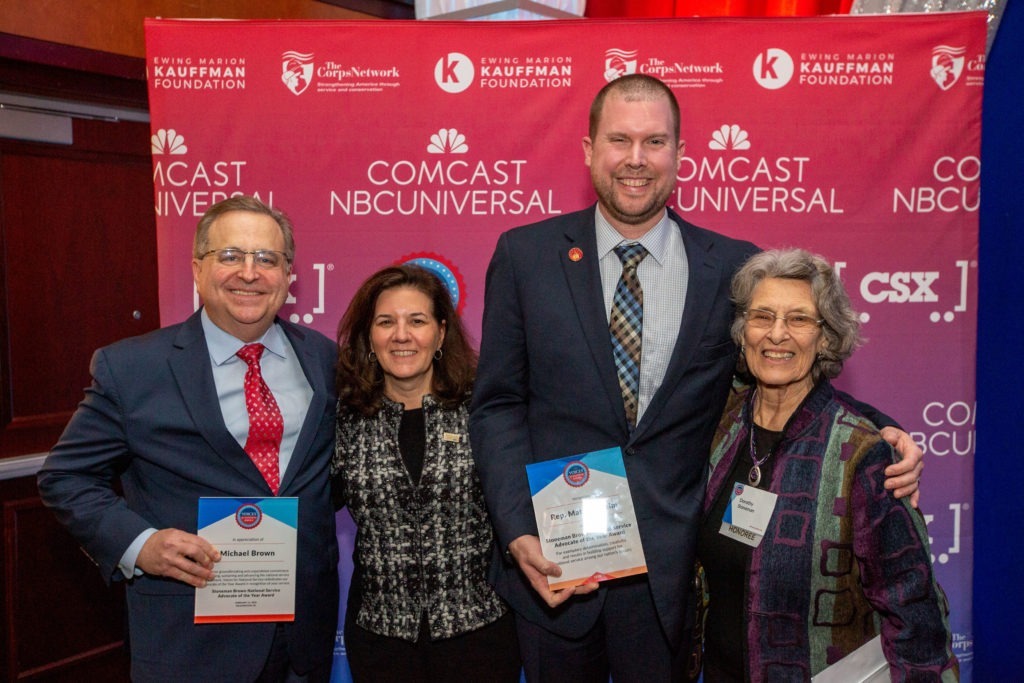 “The energy, the passion and the brilliance that exists in low-income communities in this country has not been adequately tapped,” Stoneman said. “There are millions of young people who want to serve and the minute they serve, the minute they are welcomed, respected and included, and their ideas taken seriously, they want to give back and then they want to lead. That is the power that we can liberate in this country. In addition to all of the wonderful service, there is a force for good that has not yet been unleashed.”

Michael Brown called national service “the passion of my life.” “I will continue to push for the day,” he said, “when the most commonly asked question of a young person is ‘where will you do your service year?’ with every breath that I have.”

“When you have national service, you not only have the impact that young people have in working with other young people … you also have the direct service impact, as well as the impact on the leadership development of the young people serving,” said David L. Cohen, presenting sponsor of Friends of National Service and executive vice president of Comcast Corp. “There is double impact and double leverage in every element of national service.”

To see a complete list of award winners and learn more about the event visit the Voices for National Service website.

For more speech highlights, check out this video reel of the Friends of National Service Awards Ceremony.

Helpful tips on how City Year AmeriCorps members can navigate student loan repayment during and after service.

Self-care has been clinically proven to improve your health, happiness and habits. However, with hundreds of blogs and social media...