65 years after Brown v. Board of Education: social justice entrepreneur Hubie Jones reflects on the state of education and his vision for the future

In the 65 years since the U.S. Supreme Court ruled in Brown v. Board of Education that racial segregation in public schools was unconstitutional, Hubie Jones has fought to end the marginalization of students of color, particularly black and Latino students, English language learners and children with learning differences.

While serving as the director of the Roxbury Multi-Service Center Inc., Hubie founded and chaired the Task Force on Children Out of School—known today as Massachusetts Advocates for Children—which brought to light the systematic exclusion of disabled children and non-English speakers at the Boston Public Schools. The task force report led Massachusetts to enact legislation for special and bilingual education that paved the way for federal laws. Hubie is also the founder of Higher Ground Inc., which works to connect under-resourced schools with community resources to improve education and school climate, and the Boston Children’s Chorus, which uses music to break down the walls of social class between youth.

Hubie, a charter trustee of City Year, spoke about progress and pitfalls in the quest for educational equity in the decades since the landmark ruling. His comments have been condensed and edited for length. 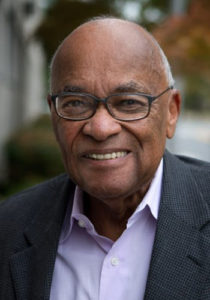 City Year: You have a personal connection to Brown v. Board of Education. Tell us about that.

Hubie Jones: When I was a student at The City College of New York, I had Dr. Kenneth Clark, a noted African American social psychologist, as a teacher. At that time, Dr. Clark was heading up a social science team that was putting together a brief to go with the legal brief for Brown v. Board of Education. He came into the class one day and shared the brief with us—it  documented the research that shows that separating young people on the basis of race is psychologically damaging to them. He told us that Thurgood Marshall and the NAACP legal team didn’t know whether they should submit this brief with their legal brief, because the U.S. Supreme Court had never accepted a social science brief before—they thought it would muddy the waters. Dr. Clark told the class, “Read the brief. See what you think about it. Have we nailed it?”

Here I am, a 19-year-old kid, and my reaction was just, “Whoa.” The social science brief was submitted to the court. It so happened that when the decision was rendered, the court cited the brief.

Dr. Clark became a very big model for me. I saw a real scholar who was using his intellect and using his passion for social justice to make change.

CY: What was that day like for you when the Brown v. Board ruling came out? What did it mean for you when you first heard it?

HJ: I was over the moon. I saw this as a big breakthrough for black Americans to get a shot at fairness in this society. Separate never meant equal. The decision that Brown v. Board did away with, Plessy v. Ferguson, was used as the legal underpinning for Jim Crow laws and segregation in public accommodations in the South. It was the basis for separating folks and discriminating against folks and, for me, it meant covering up the United States Constitution. Well, Brown v. Board of Education, wiped that away.

It looked like it was going to be a big breakthrough—only to see that in the South, white educators and parents said, “No, we will not have integrated schools.” And they set up white academies to resist the court ruling. So we had a whole set of decades where, in the South, segregated schooling basically continued. The euphoria we all had as black Americans was suddenly punctured by the realities of the resistance to the court decision.

CY: A report released last week found that students across the country, particularly black and Latino students, are increasingly attending racially isolated schools. Systemic inequities persist in our communities and in our educational system. What are the conditions that you think we need to address to change this?

HJ: I started an organization in 2010 called Higher Ground to bring the resources that exist in the community together in schools in a very powerful way, to help schools deliver the kind of education that kids need and create the kind of culture where kids can be successful.

In the three schools we’re working with in Roxbury, so many students are homeless. These kids come to school from shelters and they’re traumatized. We spent two years pulling together a program, called the family stabilization program, where we provide affordable housing for students and their families, along with other support services. We believe that these supports will help these students do better educationally—but there are over four thousand homeless students in the entire school system! We [at Higher Ground] just came up with a model which we think will work, that can then be scaled across the system. Everyone should be housed and have support services. That’s just an example of one of the systemic issues that we’re dealing with.

Another systemic issue is that we have new teachers who enter the profession, ready to go, ready to try and make a difference, and within three to four years, they leave the system. They leave because of the conditions under which they work; they’re not supported; they burn out.

CY: Looking toward the future and seeing where we’ve come from, what’s your vision for the students and communities of Boston, and for those across the country?

HJ: My vision is simple. I want every school system to fully develop young people and a country that is committed to it. I want every student to attend schools that are held accountable by parents and communities to teach at extraordinary levels and get outcomes. Schools where all of the kids have access to all of the resources that are not just about performing to tests but ensuring inquiring minds. I want schools that are creative, have the arts and music.

My commitment to all this started back in 1969. I’ve been involved in education reform a long time. For anybody who is interested in serious change in schools, they need to know that it is a lifetime commitment. It is a lifetime commitment because you will make some progress, then you will lose, then your environments change. You just have to keep trying to figure it out. We just need a group of people who fiercely are committed to trying to figure it out.

I grew up in Lexington,Massachusetts, a town that is well known for two things: being the start of...

City Year AmeriCorps members greet and welcome students to school every morning to start the day on a positive note.

Hello there! My name is Mark Nealon and I am the proud Team Leader this year at Brighton High School,...