5 things we love about Chicago 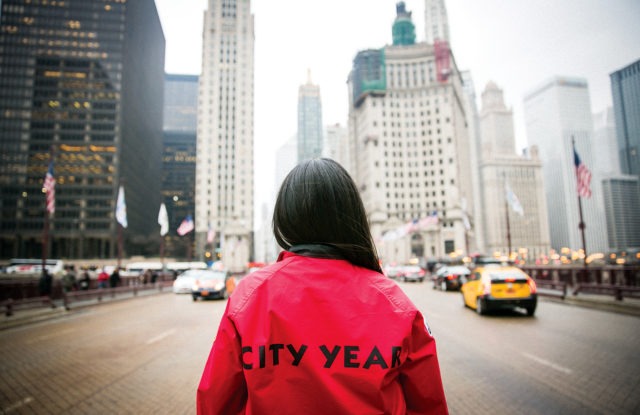 From year-round events to its eclectic and historic neighborhoods, there are lots of reasons to love Chicago! Read on to learn why we think the Windy City is an amazing place to live and work.

Moving to Chicago? Leave your car at home!

Having a car in a major metropolitan area can often be logistically challenging and a drain on your finances. But if you plan on moving to Chicago, it’s feasible to live without the stress of car ownership! The Chicago Transit Authority (CTA) reliably connects urban and suburban neighborhoods with eight rail lines and buses that span the entire city. City Year AmeriCorps members even receive a free CTA transit pass for the entirety of their service year.

Chicago is made up of 77 communities, each one with its own distinct personality and cultural flare. Are you a history buff? Spend the day in Bronzeville checking out the monuments and public art commemorating The Great Migration.

Maybe you’re more of a sports fan. In that case, head to the north side for an exciting Chicago Cubs games in Lakeview. For those who want to play tourist for the day, you can’t miss Downtown! It boasts all of Chicago’s top attractions like “The Bean” at Millennium Park and the Ferris wheel at Navy Pier.

Just because Chicago is one of America’s largest cities doesn’t mean that you can’t explore the great outdoors. Chicago boasts more than 600 public parks which include 26 miles of lakefront, 23 swimming beaches and an 18.5 mile bike trail that extends from the north side to the south side of the city. Whether it’s kayaking on the Chicago River or rock climbing at Maggie Daley Park, there’s something for every outdoor enthusiast in the Windy City.

Chicago is anything but boring. With a variety of monthly festivals, street fairs and parades, you’ll never have a dull moment. There are countless events during the summer months including the Millennium Park Music Series and the African Festival of the Arts. And though the temperatures drop during the second part of the year, there are still exciting activities happening all across the city–including the Chicago International Latino Theater Festival and Magnificent Mile Lights Festival, to name a few.

There are 361,000 talented students who need your support

Life in the Windy City is certainly exciting but, we believe that serving a year with City Year Chicago to help thousands of the 361,000 students in Chicago Public Schools achieve at high levels, set ambitious goals and reach their full potential makes it even better. By applying to serve with City Year Chicago, you’ll not only be able to experience all the fun things this Midwestern city has to offer but you’ll also have the opportunity make a difference in the lives Chicago’s inspiring students.

Deepening our impact with the Steans Family Foundation

City Year Chicago (CYCHI) is thrilled to announce a new partnership with the Steans Family Foundation, a longtime supporter and advocate for the North...

As a queer woman of color, my identities are something that I think about all the time; in every aspect...