As we all know, February is a month that has been designated to celebrate Black achievements across the United States and Canada, with plenty of gatherings and events happening to celebrate Black individuals who have achieved, or are currently achieving, great things.

Celebrating Black achievement is very important, from the tremendous odds that Black people have overcome in terms of marching for civil rights in education, and economical standards, to the daily microaggressions, and oppression in the justice system, it is important to celebrate the achievements of Black people no matter how small, not just during Black History Month, but year round. City Year Milwaukee AmeriCorps members and staff celebrated in a variety ways, including participating in a Black Excellence panel, hosting an Open Mic Night and participating in celebrations at their schools!

One way Black excellence was celebrated at City Year Milwaukee was during a panel of Black City Year Milwaukee alumni. Former City Year Milwaukee AmeriCorps members were invited to a panel to share about there experience of serving their community as a person of color. 12 alumni, as far back as Corps 5, met with current AmeriCorps members to share more about their experience and their service, and how they continue to serve their community. Alex Williams, Njeri Jackson, Neeka Lewis, Ebony Kirkendoll, Ravanna Bonds, Uniqua Adams, Rasheed Clayter and Ron Maheia, were just some of the alumni who participated.

The panel was lead and facilitated by Vicki Pulliam, also an alumna and a current Impact Manager with City Year Milwaukee. There were lots of quotes and laughter shared during the panel and it was a fun event for all who attended. One thing I really enjoyed about attending the event was the energy and the opportunity to have an honest and open conversation about service and discuss how the experiences for Black individuals during their year of service are very different from their white peers. A huge appreciation to everyone who shared more about their experiences.

The affinity groups within City Year Milwaukee, Sisters4sisters, Men of Color and SHOOC, hosted an Open Mic Night to celebrate Black AmeriCorps members and showcase Black art through the lens of music, dance and poetry.  Black artists and writers all performed showcasing their art and excellence.

The Julia A. Uihlein team at Alexander Mitchell Integrated Arts school celebrated Black History Month by leading an event on February 20th, 2020. Their event included multiple stations. The first station was drumming led by AmeriCorps members Kristi, and Jamil, and Team Leader, Caleb. Next, we had a hip-pop station led by Keisha and Max. We also had a poetry station led by Yovany and Marcos and a coloring station led by Calena and Signey. Each station lasted about 25 minutes and was open for all grade levels during our afterschool programming, where we partner with the Boys & Girls Club. It was an open event for parents to attend as well. Around 80 people showed up to City Year’s Black History Event. It was very warming seeing all of the younger students enjoying drumming. To top it off, after each station students and parents received a snow cone. Overall, it was a delightful event and we were really proud of the outcome. 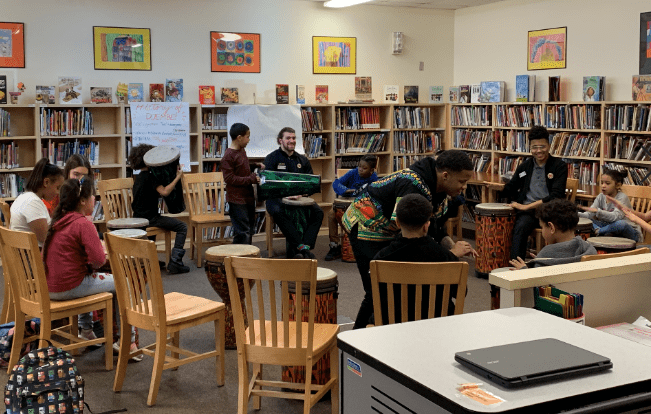 Additionally, other City Year partner schools celebrated Black History Month in a variety of ways. Students at Rogers Street Academy and Roosevelt Middle School of the Arts participated in concerts, and Clarke Street School hosted a Black History program that included presentations and performances from every class. Roosevelt also partnered with Running Rebels to create an event to celebrate the past, present and future of Black history.