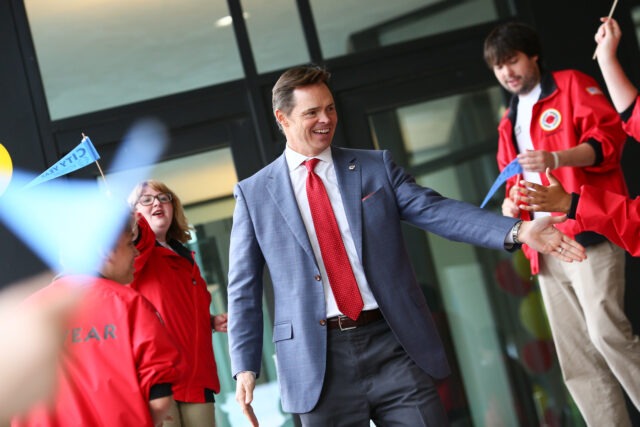 For the Kansas City Chiefs, supporting education was a natural step for a team inspired to give back to its community.

After bringing the Chiefs to Missouri in 1963, late founder Lamar Hunt—who is credited with coining the term ‘Super Bowl’ for the National Football League’s championship game—aimed to make the team part of the fabric of the midwestern city, an approach that still shapes its philanthropy today, said Chiefs President Mark Donovan.

“The franchise was dedicated to becoming part of this community,” Donovan said. “Being an active part of the community means having a positive impact in the community across all the things we do.”

The Chiefs, under the leadership of the Hunt family, help children and families in crisis, provide hunger relief, and have supported City Year since its arrival in Kansas City seven years ago. Since then, the Chiefs have sponsored teams of AmeriCorps members, celebrated students and corps members, and rallied other community leaders to champion City Year and local schools.

“City Year came along at exactly the right time,” Donovan said. “City Year could show ‘here’s how we’ve improved the lives of teachers, superintendents, and students’—that really fit perfectly for us.” Donovan became City Year’s first board chair in Kansas City, holding the post until 2020. He remains an active board member.

The Chiefs, together with other NFL teams, also helped bring City Year to the attention of the league’s social justice initiative, Inspire Change—a collaboration between clubs, players, team ownership and the NFL that focuses on education, economic advancement, police and community relations, and criminal justice reform. City Year became a grantee of the initiative starting in 2020.

“If you don’t have access to a good, solid education and resources, your potential is going to be limited right off the bat,” said Anna Isaacson, senior vice president of social responsibility at the NFL. “Making sure that kids have the tools they need to succeed in school opens up endless possibilities.”

Inspire Change has invested in City Year’s work to promote diversity, inclusion and belonging, along with Whole School, Whole Child services, and training to help AmeriCorps members respond and adapt to schools’ changing needs—which during the pandemic has included pivoting to distance learning and back to in-person learning in places like Kansas City.

In a survey, teachers in Kansas City said AmeriCorps members have supported students’ engagement and participation, helped students feel a sense of belonging, and provided valuable support to their classrooms and students.

By building trust with students, AmeriCorps members lay the groundwork to help them academically and hone their social and emotional skills, said Bedell, who led the district to regaining full accreditation this year from the Missouri State Board of Education.

Research shows the efforts of AmeriCorps members make a difference. The more time students spend with City Year AmeriCorps members, the more likely they are to improve on social, emotional and academic skills and on attendance, with those furthest behind benefitting the most, according to a study published in 2020 by the Everyone Graduates Center at the Johns Hopkins School of Education. Social and emotional skills can include responsible decision-making and self-management.

A short drive from downtown Kansas City, a team of AmeriCorps members sponsored by the Hunt Family Foundation/Chiefs are helping students at Central Middle School reconnect with classmates and teachers, catch up and keep up with their assignments, and rebuild routines disrupted by the pandemic.

“Investing in schools, where kids spend so much of their time, is the most important commitment you can make to our community,’’ said Jeff Shafer, a City Year senior vice president and executive director in Kansas City. “The unwavering support that the Chiefs and Mark have given to City Year has a ripple effect that’s felt in classrooms every time a student turns to an AmeriCorps member for support.”

From their first day of school service, AmeriCorps members from different backgrounds come together to take on—and overcome—new challenges, changing their own lives and those of the students they serve, Donovan said.

AmeriCorps members serve about 4,000 students in seven schools across Kansas City, compared with two schools and 1,000 students when City Year’s partnership with the district—and the Chiefs—began in 2015.

“The reason we’ve continued to be involved, is it works,” he said. “When I was board chair, and even today as a board member, it makes my job a little easier when I can sit in front of somebody and say, ‘I’ve actually witnessed the success. I’ve seen this work.’”