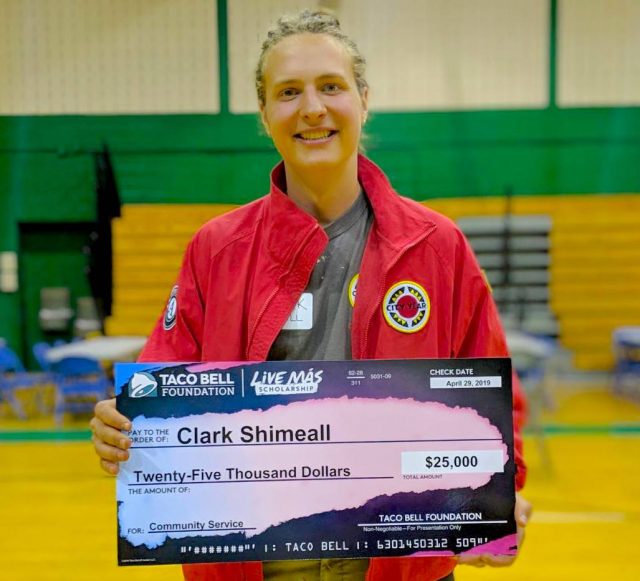 The Taco Bell Foundation and City Year share the belief that young people have the power to change the world. Since 1992, the Taco Bell Foundation has reached more than 4 million students by awarding $110 million+ in scholarships and grants—including to partners like City Year—to break down barriers to educational opportunities and careers.

The Foundation’s Live Más Scholarship program supports young people with bold ambitions to create good. Instead of focusing on grades or test scores, applicants submit a video explaining their passion. This untraditional approach has attracted a flood of applicants since the start of the initiative in 2015, says Jennifer Bradbury, the Foundation’s executive director. Scholarship winners, who include a City Year AmeriCorps member, have “bold ideas about how to try things in a new and different way,” Bradbury says.

Over the past year, the pandemic has magnified the educational inequities young people face, prompting the Taco Bell Foundation to broaden its mission to address them. Early in the pandemic, the Foundation temporarily focused its support toward addressing hunger after school closures made it hard for students to get meals.

“There’s no cause more important to our brand than breaking down barriers for young people, supporting their passions and dreams, and helping them lead tangible change,” Bradbury says.

The Taco Bell Foundation awarded $7 million in Live Más Scholarships this year and another $10 million for grants to its nonprofit partners, like City Year. The Foundation chooses its partners by looking at evidence-based models, proven impact, broad geographic reach and commitment to supporting future leaders.

“We choose partners who are experts in their space,” Bradbury says. “We have Taco Bell restaurants in communities across the country, and we want to be able to support those communities.”

In 2013, the Taco Bell Foundation supported City Year in four cities. Since then, the Foundation has expanded its impact to 23 cities where City Year serves and nearly quadrupled its financial support, making a difference in the lives of students in systemically under-resourced schools through City Year Team and Program Sponsorships. With the Foundation’s support, AmeriCorps members serve full time in public schools, helping students strengthen academic, social and emotional skills, like teamwork and self-management.

I'm really excited to continue partnering with City Year and to strengthen the case for AmeriCorps and national service. If young people are able to pursue their passions, they're going to change the world.

During the pandemic, AmeriCorps members have prioritized helping students connect to their school communities. They bring additional joy to classrooms and recreate a sense of school routine—including by facilitating virtual lunches where peers can catch up, running online homework help sessions, and greeting students at the start of the online day.

About 95% of partner teachers agree that AmeriCorps members have supported the engagement and participation of students in school this year, and have helped students feel a sense of belonging, according to a recent City Year survey.

“There is a type of energy that my City Years bring to the class that I think is so needed, and I think is so special,” says Hanna Johnson, a partner teacher in Detroit at Central High School, where a team sponsored by the Taco Bell Foundation serves.

Along with funding from the Taco Bell Foundation, AmeriCorps members in Detroit receive support from Taco Bell franchisees like Team Lyders LLC, which runs nearly 190 Taco Bell restaurants in six states and Canada, including over 40 restaurants in and around Detroit.

“Through our support of City Year, we make our schools stronger, which makes our community stronger,” says Team Lyders President Pete Lyders.

Along with supporting students, AmeriCorps members also have opportunities during their service to hone their professional and leadership skills. Live Más Scholar Clark Shimeall, who served with City Year in 2018 and 2019, says that experience shaped his goals.

When Shimeall joined City Year after graduating high school, he didn’t plan to apply to college. During his service year, he realized how important bringing people together, acknowledging the world around us and furthering the cause of social justice were to him—and that a college education would make it easier to forge a path true to his ideals.

In 2019, Shimeall applied for a Live Más Scholarship and received a $25,000 award, which along with his AmeriCorps Segal education award, has funded his enrollment at Portland State University in his home state of Oregon. With the financial breathing room created by the Live Más Scholarship, he’s been able to pursue environmental and social equity work.

Shimeall recently won a renewal of his $25,000 Live Más Scholarship, and is now considering whether to attend graduate school. In all, the program gave out scholarships to 725 young people this year, including renewals and Taco Bell employees—compared to $1 million in awards to 100 winners when Bradbury joined the Taco Bell Foundation in 2016 to lead the initiative. Scholars, who earn awards ranging from $5,000 to $25,000, also receive mentoring and networking opportunities.

As the Taco Bell Foundation looks ahead, it sees the power of education and national service to help young people drive change.

“I’m really excited to continue partnering with City Year and to strengthen the case for AmeriCorps and national service,” Bradbury says. “If young people are able to pursue their passions, they’re going to change the world.”