Advancing the work of racial justice: from City Year to Service Never Sleeps 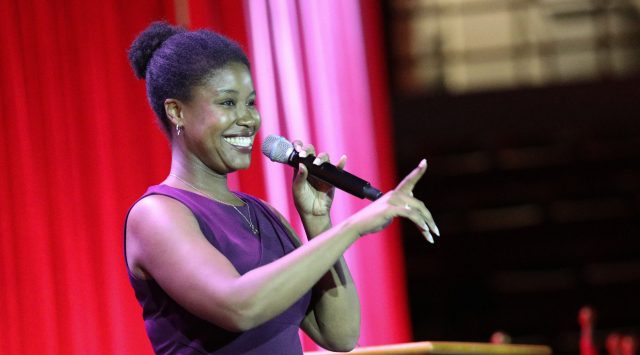 Whitney Parnell (Washington, D.C. ‘11, ’12), is the founder and CEO of Service Never Sleeps, a D.C.-based nonprofit that works toward a more socially just world through allyship training and skills-based volunteer programs. Service Never Sleeps delivers its signature allyship curriculum to help individuals leverage their areas of privilege to advance racial justice as a way of life and to help organizations deepen their allyship commitments. SNS also provides young professionals an opportunity to serve with allyship in mind. The organization’s fellowship program engages young professionals in a year of part-time service to provide skills-based volunteerism to local nonprofits while participating in monthly allyship and race equity trainings to build their ongoing commitment to the work.

Below are highlights from a conversation between Whitney and City Year National Senior Communications Manager Aisha Folkes (Providence ’14).

What led you to serve with City Year?

I grew up between Latin America and West Africa as my dad was with the U.S. Foreign Service. It provided an amazing lifestyle that really emphasized the fact that diversity is a beautiful, wonderful thing that only makes us better. I’m grateful for my parents who had such a great posture themselves with how we were entering new spaces. They recognized that we were strangers coming in and that we needed to learn and absorb in order to engage with the community.

I also learned growing up that white supremacy is universal and I became really passionate about social justice. Then when I got to college at Washington University in St. Louis, I was very much struck by the systemic nature of racism in this country, and how intricately woven it is into the fabric of everything. I decided to join City Year to help me get a sense of how I’d like to move forward in regards to justice work.

Many City Year alumni talk about the power of relationships and the deep bonds they formed during their service. Was this true in your experience?

During my service, I met Samson Girma (Washington, D.C. ’12) who is now one of my closest friends and was the first person that I called to start Service Never Sleeps. He’s a co-founder and now our Chief Operating Officer.

Neils Ribeiro-Yemofio (Washington, D.C. ’09), who is now chief of external affairs for a charter school in D.C., is the strongest and closest mentor that I’ve ever had. He currently serves as an advisor to Service Never Sleeps.

These two really critical relationships came from City Year and I think they emphasize the importance of this work. Liberation work is about centering people, humanity and relationships. I think that there’s a high opportunity, given the team dynamic of City Year, to really have relationships for life.

I can’t even imagine myself without Samson and Neils now. I will always be grateful to City Year for those very special relationships in my life.

How do you see yourself continuing the work of City Year today?

For starters, my organization is called Service Never Sleeps and City Year is a year of full-time service. I believe that service, done correctly, is an important part of how humanity should show up. It’s important to be deeply proximate, to position yourself as a joiner of the community, and listen to what is being asked of you, as opposed to coming in and feeling the need to “save” people who experience fewer forms of privilege than you.

I often wonder what my trajectory would have been had it not been for my City Year experience, those two years deeply invested in full-time service. I’m thankful for the lessons I learned— they played a large role in how I show up and my commitment to the work full time.

I’ve also noticed the progress City Year has made with racial equity. Back when I served, there was a lot of work to be done, and there’s always more work to be done. Seeing this progression and commitment to becoming an anti-racist organization allows me to feel connected to City Year in a new way. This is the work Service Never Sleeps does—leading organizations, and our own, on this never-ending journey of social justice and allyship.

Why is racial equity the undercurrent of everything Service Never Sleeps does?

Race impacts every major lived experience, it causes the most disparities, and the data shows that strategies to address racism give you the tools to address every other social justice issue. If you don’t consider other issues of injustice through a critical race lens, the solutions seem to only benefit those with white privilege. Centering race works toward the liberation of all of us.

How did Service Never Sleeps evolve into the organization it is today?

When we first started SNS, the main component was the service-based fellowship. As I began to deepen my level of personal activism, I became frustrated and tired of hearing that I have the responsibility, as a Black woman, to address anti-black racism and sexism. I needed allies in this work. At the same time, I considered my own areas of privilege and knew I needed to show up as an ally as well. Through this processing, I knew we needed to transition as an organization to focusing on allyship in addition to service.

When we launched the allyship training in spring 2017, I was hyperaware that so much of society did not want to discuss race, the role of anti-blackness, or the need to center Black people in equity work. This initially affected the ways I would conduct our trainings. I was intentional about discussing the areas where I hold privilege rather than touching on race because I knew it would feel threatening for so many people.

Then, just a few months later, the violent protests by white supremacists in Charlottesville happened. I was there as a counter-protester and I experienced so much trauma. You can’t unsee that. A shift took place within me. After being so proximate with death, I realized the stakes—I had to be all in. I became completely free and assertive in the need to center race in our allyship trainings and our organization as a whole. Service Never Sleeps began to evolve into an anti-racist organization. We now offer racial justice focused allyship training, with intersectionality so that everybody can enter in, and our fellowship experience has so much more depth now that we hone in on race.

During this shift, Service Never Sleeps lost a few teammates and supporters. I’ve realized that antiracism, liberation and true social justice work comes with sacrifice. It’s been amazing to find people who believe fully in our mission and me showing up as my authentic self. I feel more liberated that I’ve felt before. It’s been a journey, but we’re here.

How does Service Never Sleeps prevent its service fellows from “saviorism,” from potentially going into the D.C. community and doing more harm than good?

I believe that saviorism, from a position of privilege, is the result of society telling us that we know best, when in reality we don’t when it comes to those that we’re seeking to be allies with. It’s important to really lean into addressing saviorism as opposed to trying to sugarcoat it.

Our fellows are matched with a local nonprofit to do 10 hours a month of skills-based service, such as strategic planning, accounting or communications, in order to help the nonprofit grow in capacity to execute their solutions at a higher level. A lot of times, our fellows will begin their service with the mindset: “I’ve got the skill so I can save this organization and hence save these people.” We help our fellows change their thinking to “you will be deeply proximate and giving in the way that is needed of you.” This is why our leadership development portion is so integral to our program. We use our monthly trainings to focus on humility as the most critical piece of allyship.

The truth is that in our privilege, we are the least equipped to have answers and solutions. It is our responsibility is to center the community and follow their lead. It’s so easy to show up as a savior, to fall into savior at any given moment. We train our fellows to recognize and catch the savior approach when it comes up, take a pause, and come back to the stance of listening and following the community’s desires.

What advice would you give to other alums who desire to follow a similar career and activism path?

If I can do it, you can too! What has made me able to thrive thus far is leaning into my passions and gifts while trying my best to remain humble, recognize my biases, and acknowledge how much growing and learning I must do.

What I would hope most is that I can motivate people to try to show up as their absolute best selves in the fight for justice, so that we can all live our best lives. I want to encourage people to believe that we all have all the power in ourselves to be our best selves. And that is enough and an amazing thing, so just live it and do it. That is what I would hope that people get from hearing about this. I hope that they feel a conviction to be anti-racist, I hope that they feel committed to be allies in their areas of privilege.