The Impact of Individualized Support 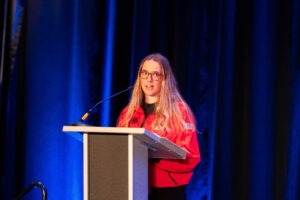 I grew up in Lexington,Massachusetts, a town that is well known for two things: being the start of the Revolutionary War and having a really good public school system.

School was always a priority, and it was determined early on that I would graduate high school and immediately go to college – which I did! I attended public schools in Lexington from kindergarten to senior year of high school. It cannot be overstated how much I took this access to an amazing public education for granted.

And as amazing as my education was, there were still times I struggled in school. When I was in 7th grade, I started really struggling in math class. I had always been a good student, but suddenly, nothing seemed to make sense and I fell behind.

Thankfully, I had a teacher who offered to tutor me individually before school on concepts that just weren’t clicking. We would meet every Wednesday in the library at 7:30 a.m. for the rest of the school year. As a result, I was able to improve in math that year.

I still remember how good it felt when I finally got a 100% on a math quiz and how impossible that felt at the beginning of the year. The experience of receiving support showed me how impactful one on one tutoring can be for students.

In addition to my own experience, it was the COVID-19 pandemic that ultimately motivated me to apply for City Year. During the pandemic, I realized just how privileged I was in my education and how I wanted to help others benefit from their education as well.

The pandemic emphasized for me that education is more important now than ever. With the switch to virtual learning, I realized that education is a key factor in discerning what’s going on in the world and how we can best impact one another. I also realized that supporting education, by serving directly in the classroom with students, was the best way for me to make an impact.

My first City Year, I served at the Parlin K-8 school in Everett working with 8th graders in math and science classes – and I loved it. Getting to know all my students was nerve wracking – they were middle schoolers (some might say the most terrifying age group) but, as soon as I got to know them, I learned how incredibly smart, resilient and funny they were. I loved tutoring my students every day and forming strong, mentor relationships with them as the year progressed. Meeting them was easily the best part of my year.

A couple of months into the school year, I noticed one student wasn’t fully applying himself in class. Despite being very smart, he tended to give up on himself – and his work – because he had a hard time focusing.

As the year went on, I noticed that when I took the time to sit down with him, I was able to get him to accomplish more and more of his work, even when he sneakily tried to distract me with conversation. I noticed he seemed to be able to focus more when he had individual support.

Throughout the year, we developed a strong relationship. He was the first student to wish me a happy birthday; even though I found him sitting in the principal’s office that morning.

In September, he tested as low as you can on a math diagnostic exam. But by May, he had the highest growth in his entire class and tested at a 7th and 8th grade math level. I was, and still am, so proud of him.

Although City Year has yet to expand to Everett High School, I’m happy to know that he’s set up for success starting the year there. A City Year teammate who returned to serve in Everett this year ran into my former student one day and relayed that he really likes high school so far.

Since I had such a rewarding experience throughout my first year of service, I decided to return for a second year, this time on the Greater Boston Civic Engagement team. Despite the successes I saw in the classroom during my first year, it was hard to tell if I was really making a long-term impact. So, in my second year, I decided to take on a role that I knew would create the most systemic impact across schools in Boston and Everett.

It’s easier to see your impact when you’re painting a mural and can visibly see the transformation of the space. It’s also very important to give all students a positive, welcoming environment to learn in and provide them with the resources they need to succeed – even if that is just a notebook and a pencil. I can’t count the number of times last year when students came up to me because they needed pencils, or I would hand out scrap paper because students didn’t have notebooks. On the Civic Engagement Team this year, I helped create over 3,300 supply kits for students.

“So, in my second year, I decided to take on a role that I knew would create the most systemic impact across schools in Boston and Everett…while AmeriCorps members serve full time in 16 schools, the Civic Engagement team works with over 40 schools and community centers to help fill the gaps throughout Greater Boston.”

In November, I lead my first service event held at Tech Boston Academy in Dorchester and it was amazing to see the excited reactions from students and teachers to murals that I designed and know that the paint will remain there for years to come. I also created a mindfulness maze for the event in hopes of providing students with a chance to refocus during the day, even if one of them did tell me the maze looked like Star War’s Death Star.

One on one tutoring has been tremendously impactful to me in my own life, and I have been positively impacted by the students I served as a tutor and mentor through City Year.

This year, in my second year as an AmeriCorps member, City Year allowed me to serve more students and schools to provide increased resources and safe and nurturing environments at a systemic level. I’m grateful for my time with City Year so far and look forward to all the experiences the next school semester will bring!

City Year AmeriCorps members greet and welcome students to school every morning to start the day on a positive note.

Hello there! My name is Mark Nealon and I am the proud Team Leader this year at Brighton High School,...

My grandmother in Nepal, a matriarch in her own right, was a teacher – and always told us that...