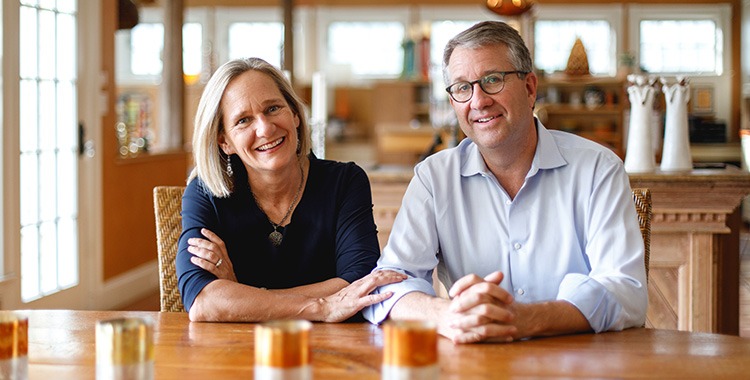 For the national service community, including City Year staff and AmeriCorps members across the country and around the world, the Atwood family represents the spirit of Ubuntu–“I am because we are; my humanity is tied to yours.” At every stage of City Year’s history, Kristen and Jim Atwood and their family have invested passion, resources and countless hours to make the vision of City Year possible and to inspire families’ commitment to service. Kristen’s path to City Year spans three decades–in 1988, she became the organization’s first staff member and remains deeply involved today, serving as a member of the national board of trustees, co-chair of its international committee, and co-chair of City Year Boston’s Red Jacket Society (City Year’s major gifts program). Kristen first met co-founders Michael Brown and Alan Khazei at a conference at Brown University. She was immediately drawn to City Year.

“The vision for City Year was and remains essential to the health of our democracy and the strength of our communities–that young people are vital to an America where every child could achieve their unlimited potential,” says Kristen.

“It took about five minutes of Michael and Alan’s presentation and I was in. And then, I talked them into hiring me to recruit the first corps. They laughed and said they didn’t have any money, but I took the job anyway.” Kristen took her unwavering commitment to diversity door-by-door and block-by-block across Boston to recruit the first corps of 50 young adults. “Kristen is a force of nature. Her dedication and drive have left an indelible imprint on the organization,” says City Year CEO and Co-Founder Michael Brown. Michael also says the Atwood family has been critical to the success and culture of City Year.

“They have helped will this organization into existence, into growth, into greater impact, at every single stage of City Year’s history,” he says. “Time and again, they have shown their deep commitment to the organization–as volunteers, donors, board members, champions and parents.”

Jim Atwood shares Kristen’s devotion to City Year and currently serves as a member of City Year Boston’s board. The couple pioneered City Year’s tradition of major annual galas with Starry Starry Night as the event’s original hosts; helped cofound City Year South Africa; and most importantly, are parents of four City Year AmeriCorps alumni. “The most powerful gift that Jim and I have ever received was the news that our children would serve with City Year,” says Kristen. “Because we knew it would have a profound impact on their lives and those they served.” That vantage point as parents fueled a new passion for the Atwoods: greater investment in the City Year AmeriCorps member experience.

“Kristen and I want to make sure that we take care of our corps members as they lead and serve. We want to ensure they are happy, healthy and enriched in ways that bring them greatest value during a very challenging year,” Jim says. “We will always be indebted to City Year for the community of friends and mentors, the privilege of service to our country, and the endless inspiration and opportunity to contribute what we can to progress City Year’s vision and values,” Kristen says. “For us, City Year has never been something you ‘do’–it’s a way of life.”